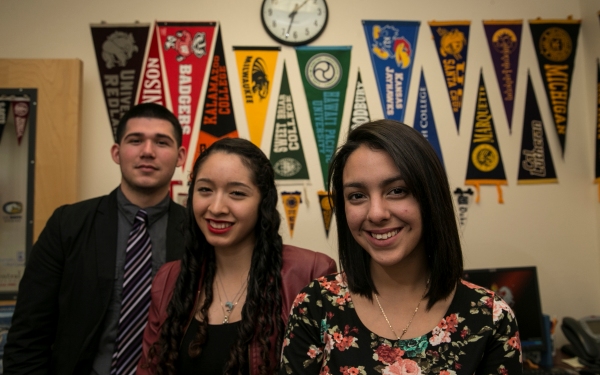 While most of her classmates at Arleta High School in Los Angeles anxiously await word on their college applications next month, Unique De La Torre has been a portrait of calm since she was accepted in December to a private New York university.

She is among an increasing number of high school seniors taking advantage of early admission programs, which allow students to apply to their top choices in November and find out in December — removing a lot of stress and uncertainty in the process.

More than 460 colleges nationwide, many of them top private institutions, offer early options as well as the chance to apply during the later, regular period. Most students still choose the latter.

But the number of colleges offering earlier deadlines has increased by about 7 percent in the last five years, according to the College Board. And most of those colleges report that they are receiving more early applications, according to surveys conducted by the National Assn. for College Admission Counseling.

Stanford’s 7,297 early admission candidates were the largest in the school’s history, up 24 percent from the previous three years, officials said. Pomona College in Claremont, Calif. saw early admission applications increase more than 40 percent last year from the year before.

For colleges, the programs provide a pool of motivated, academically successful students who are likely to enroll if they are offered a spot. Schools then have a better picture of the types of incoming freshmen that they need to round out the class — including grades or SAT scores, gender and ethnic and socioeconomic diversity.

“If we identify those students we’d like to bring into the entering class early, we’ve eliminated uncertainty later on, whereas in the regular admission’s process, we’re competing with other wonderful schools out there,” said Seth Allen, vice president and dean of admissions and financial aid at Pomona.

Critics say that the early plans have pitfalls, benefiting some students, pressuring others to make unwise choices and hyping the prestige of some institutions. They especially find fault with so-called early decision plans in which students must enroll at a school if they are accepted. Early action, by contrast, allows seniors to apply to multiple schools without committing to one school.

Many education experts say that as more seniors see their friends applying early, they do so as well, without taking sufficient time to carefully weigh college choices. Late bloomers whose grades and test scores improve in their senior year, for example, would be disadvantaged by applying early.

USC has chosen not to participate in early admission programs.

“We don’t think students should be rushing into choosing a college,” said Timothy Brunold, USC’s admission director. “The senior year of high school is a time of incredible exploration and maturing of students. How can they be truly well-served by deciding in November or December?”

Brunold also said such plans tend to favor students who are savvy about the process or who attend well-financed high schools with counseling and other resources, raising issues of access and equity.

And as early applications grow, more are being deferred or rolled into the regular applicant pool, where a student may have less chance of being admitted and have to hustle to meet deadlines for other colleges.

Many schools face pressure from boards of trustees and college rankings to treat the high number of applications as a measure of success — and early applications are one way to manipulate demand, critics say.

“There are lots of strategies out there to load the applicant pool up with as many people as you can ... and there’s a lot of danger in that,” said Stephen Pultz, assistant vice president for enrollment management at the University of San Diego, which dropped its early admission plan in 2012. “But I do understand the pressure a lot of institutions face.”

Students who apply early typically begin the process the summer before their senior year: filling out online forms, gathering transcripts and drafting the all-important personal essay, as well as the supplemental ones required by most of these colleges.

“I was ahead of all my friends in doing my portfolio,” said Unique, 17, who is headed to Adelphi University on Long Island to study nursing. “And now it’s a relief. If I hadn’t taken advantage of the early action program I’d still be stressed out like everyone else.”

None of the 10 University of California campuses offers early application plans, mainly because of the volume of applications received (more than 200,000 systemwide) and the depth of review each one requires, spokeswoman Dianne Klein said.

Of the 23 California State University campuses, only Cal Poly San Luis Obispo offers an early decision option. For fall 2015, the school received about 4,000 early applications and accepted about 28 percent of them, spokesman Matt Lazier said.

Colleges surveyed by the admission counseling association reported a higher acceptance rate for early decision applicants than for those applying during the regular application period (62 percent compared to 52 percent).

Mizraki knew early on that Barnard would be her top choice; she researched its early decision acceptance rates and focused with laser-like precision on getting in.

“It’s a very strategic sort of game,” said Mizraki, 18, who earned a 3.9 grade-point average and spent months working on her personal statement. “I was definitely advised, why wait to apply and make it harder on myself.”

“Starting as early as the 10th grade, we work with each student individually to determine the best strategy,” Wallace said. “If they’re looking at extremely competitive schools that offer early decision there is pressure on the student … because it probably will be the best shot to get in.”

As more highly qualified seniors compete for a limited number of early admission spaces, Wallace said, she is seeing an increasing number of colleges defer students.

Zeltzin Angon, a straight-A student at the Cesar Chavez Learning Academy in San Fernando, Calif. applied early to a host of top-notch schools, including Columbia, Yale, Princeton and her first choice, Brown, through the QuestBridge program, which links high achieving, low-income students to scholarship opportunities.

She wasn’t a match for a full scholarship at any of those campuses, but she was deferred at Brown. She was already accepted to Cal State Long Beach and is waiting to hear from several UCs as well as Dartmouth.

“At least I have something to fall back on,” the 17-year-old said, “and now it’s a waiting game.”