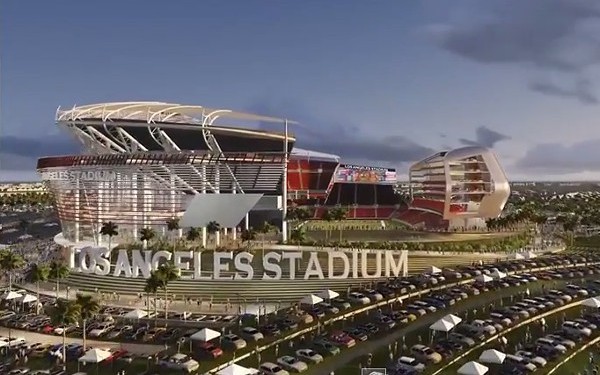 The San Diego Chargers and Oakland Raiders, rivals on the field, are moving forward together on a plan to build a $1.7-billion NFL stadium in Carson that they will share.

The Chargers and Raiders will continue to seek public subsidies for new stadiums in their home markets, but they are developing a detailed proposal for a privately financed Los Angeles venue in the event they can’t get deals done in San Diego and Oakland by the end of this year, according to the teams.

In a statement given to The Times on Thursday, the Chargers and Raiders said: “We are pursuing this stadium option in Carson for one straightforward reason: If we cannot find a permanent solution in our home markets, we have no alternative but to preserve other options to guarantee the future economic viability of our franchises.”

The teams are working with “Carson2gether,” a group of business and labor leaders. The coalition will announce the project Friday at a news conference near the 168-acre site, a parcel at the southwest quadrant of the intersection of the 405 Freeway and Del Amo Boulevard.

They plan to immediately launch a petition drive for a ballot initiative to get voter approval to build the stadium.

This latest high-stakes move was precipitated by St. Louis Rams owner Stan Kroenke, who announced in December his plan to build an 80,000-seat stadium on the land that used to be Hollywood Park.

That put pressure on the Chargers, who say 25 percent of their fan base is in Los Angeles and Orange counties. The Raiders, among the most financially strapped NFL teams, joined forces with the Chargers because they don’t have the money build a stadium on their own.

The Jets and the Giants, who both play in East Rutherford, N.J., are the only NFL teams playing in the same stadium.

L.A., which has been without the NFL for two decades, now finds itself with three teams that could relocate here and four stadium proposals, including the Farmers Field concept downtown and developer Ed Roski’s plan in the City of Industry.

Even skeptics have to concede the city has never been in a better position to have the country’s No. 1 sport return, though none of the three teams has yet to commit to moving here.

Like the Rams, the Chargers and Raiders are on year-to-year leases in older stadiums. Prospects for new venues in San Diego and Oakland are bleak and, as is in L.A., there is no appetite to commit public money to build a stadium. The Carson proposal calls for the teams to be equal, as opposed to one’s acting as landlord to the other.

The long-vacant Carson Marketplace site is part of an old municipal landfill and has been the subject of significant cleanup efforts in recent years. The NFL has looked into buying the site at least three times.

In the late 1990s, entertainment executive Michael Ovitz wanted to build on that site and bring in an expansion franchise. In 1999, Houston oilman Bob McNair outbid two competing L.A. groups, paying $750 million for the team that would become the Texans.

The Chargers and Raiders bought the land from Starwood Capital Group. Barry Sternlicht, its chairman, said of the project: “This is a great opportunity to return professional football to Los Angeles, and we are going to do everything we can to make it happen.”

Whereas Kroenke and his partners have expansive plans for retail space, housing and a 6,000-seat theater — along with the 80,000-seat stadium — on the 298-acre Hollywood Park site, the Carson concept calls only for a football stadium, with room for more than 18,000 parking spaces as well as tailgating.

“We’re thinking about the project as a 21st century, next-generation stadium,” said architect David Manica, noting that the venue and renderings are still in the early conceptual stages. “We want it to be the ultimate outdoor event experience, which includes both sports and entertainment. And we want it to be uniquely L.A.”

Manica, president of Manica Architecture, was formerly at HOK Sport, where he led the design of the Texans’ stadium, the renovation of the Miami Dolphins’ stadium, and the seating bowl of Wembley Stadium in London.

One early concept for Carson is clear seats that reflect the color of the lights shining on them — the seats could be silver and black for Raiders games, and powder blue for Chargers games.

More pressing are the steps the developers would need to take, including working with the coalition to support a ballot measure that would allow the venue to be built. If the clubs can gather the required signatures to place the stadium initiative on the ballot, approval can be attained either through a public election or by a vote of the Carson City Council.

Kroenke is further along in that regard, having already collected the signatures for a ballot initiative. Inglewood’s mayor has said that rather than holding a public election, the council would vote on the initiative, perhaps as early as Tuesday.

The NFL long has contended that it will control the process of any return to L.A., including which team or teams will be allowed to relocate, and which stadium proposal will get the green light. How much control the league actually has is up for debate, as it does not have a strong track record of stopping teams that are determined to move. League rules stipulate that any such decision requires a three-quarters majority vote of the 32 teams.

The Chargers and Raiders said they have kept the league’s new Committee on Los Angeles Opportunities, and the commissioner, fully informed about their joint effort, and that they intend to strictly adhere to the relocation procedures.

The Chargers have been seeking a stadium solution in the San Diego area for nearly 14 years, a period spanning seven mayors and nine proposals. The relationship between the club and the city has grown especially strained in recent days, as the Chargers have pushed the city to contribute to a new stadium.

The Raiders have been working on a stadium solution with Oakland and Alameda County for about six years but have not made much progress. The club, which has said that remaining in the Oakland market is a priority, has venue concepts but no taxpayer money has been committed. The Inglewood and Carson proposals do not involve any public money.

The reason the franchises would be able to privately finance a stadium in Carson, as opposed to their own cities, is that the L.A. market could better support the sale of hundreds of millions of dollars of preferred seat licenses, one-time payments for the right to buy a season ticket. The teams would also get revenues from naming rights; sponsorship and advertising would be far more lucrative than in smaller markets.

It’s widely speculated in NFL circles that a franchise that moves from a smaller market to L.A. could end up being worth 150 percent of its current value.

Franchises would probably have to pay a hefty relocation fee, although the league has never specified an amount.

The three teams all previously played in L.A., with the Raiders and Rams leaving Southern California after the 1994 season, and the Chargers, then in the old American Football League, calling the L.A. Memorial Coliseum home in 1960, their inaugural season.

All signs point to the Chargers and Raiders — like the Rams — targeting the 2016 season for relocation, should those teams not get acceptable deals to remain in their current cities. The NFL has long held that L.A. is a two-team market, and it’s almost inconceivable that the league would allow three teams in such close proximity.

The NFL has ruled out any teams’ relocating this season, and is strongly opposed to a franchise enduring more than one lame-duck season in a market about to be vacated. A team or teams moving to L.A. would play for at least two seasons in a temporary home — most likely the Coliseum, Rose Bowl or possibly Dodger Stadium — while a new stadium was under construction.