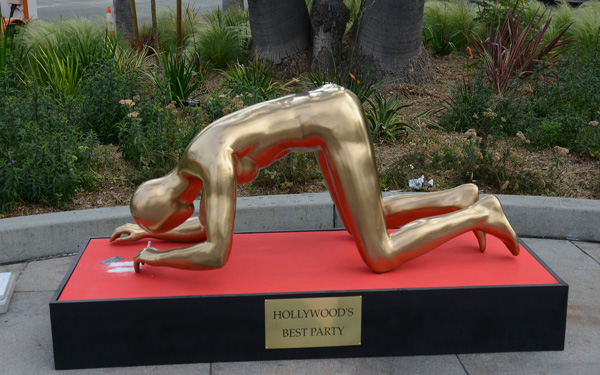 As Sunday's Oscars approach, fans and industry folk are abuzz with anticipation for who will win top honors. But for LA-based street artist, Plastic Jesus, the Boyhood / Birdman race was ignored for an examination of a shunned, darker side of Hollywood.

Early Thursday morning, the statue appeared on Hollywood Blvd. and La Brea Ave., the neighborhood in which Sunday's awards ceremony are to be held. It feautres the iconic golden man engaging in a four-on-the-floor coke binge.

Plastic Jesus, who's been dubbed the Banksy of LA, is no stranger to entertainment industry commentary. At this time last year, the artist featured a similar Oscars statue, but with a needle sticking out of his arm. This was commentary on Philip Seymour Hoffman's heroin overdose just weeks prior.

On behalf of Plastic Jesus, photographer and collaborator offered this statement to LAist:

"This piece is intended to draw attention to Hollywood's hidden problem of drug addiction that effects [sic] hundreds of people in the showbiz industry and is largely ignored until the death of a high profile A list celebrity."

Update: The statue's coke binge has come to a close. Plastic Jesus removed the installation after a party pooper started complaining.