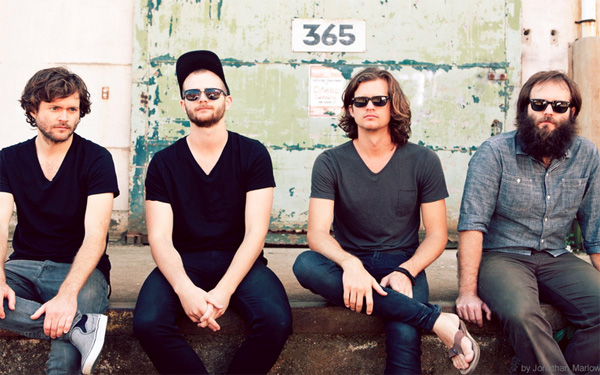 You know that song you constantly hear in movie trailers or in TV commercials? The one with the infectious chorus that you can’t get out of your head. After like the fifteenth time of hearing it, you Shazam it or do a quick Google search. And once you find the band name, you encounter their other songs, making you feel like the Christopher Columbus of undiscovered music. “Come With Me Now” is that song. Kongos is that band.

The past few years have seen Kongos—four brothers out of South Africa—on a rise to rock n roll glory. In 2012, the boys released their sophomore album Lunatic, topping the South African music charts. And since 2013, when Kongos self-released the album in the States, their folk-rock sound has popped up everywhere from The Expendables 3 trailer to ESPN’s college football commercial to Shazam’s Top 10 list.

Johnny, Jesse, Daniel and Dylan Kongos grew up in London and South Africa with their mother and father, John Kongos, a famous musician. Their peripatetic upbringing has influenced their sound but their range doesn’t extend solely to places they’ve lived. Kongos blends Burundi drums, American slide guitar, accordion and Brit-pop. The result is a distinctive medley ideal for a sweaty and wallowing live-set. Hence their 2015 Lunatic tour.

In mid January, Kongos released a video for their latest single, “I Want to Know.” It’s an assemblage of live footage from the band’s European and North American tour.

About the video, the band says, “We really wanted to capture the feel of a KONGOS show in this video. A lot of people might only know us as ‘that song on the radio’ so we wanted to give the viewer a sense of what the band is all about. Because the footage is from so many different nights, we went with black and white to tie it all together and give it a consistent flow... Plus, it makes us look cooler than we are."

The video gives fans and curious newcomers a feel of the live experience of a Kongos show. And come mid March, the band is headed to Los Angeles and surrounding areas. Make sure to catch them while they’re in town or be victim to hear them exclusively on the radio, TV and permanently engraved in your mental playlist.

Get your tickets for the March 12th show in Riverside here and March 13th show at The Wiltern here.