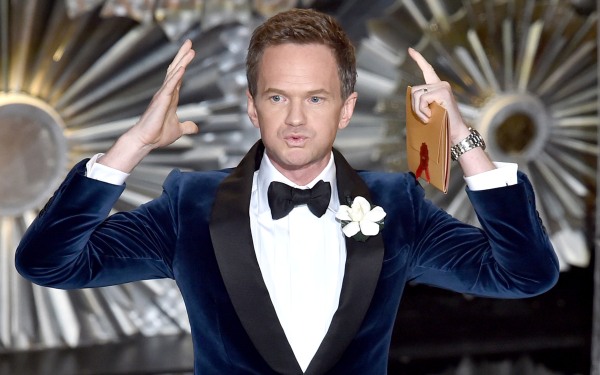 Harris was poking fun at a perceived lack of diversity surrounding this year’s Oscars, where minority nominees were absent from all four acting categories. But the issue of minority rights did come to the fore after all.

“Selma” -- a film about Rev. Martin Luther King Jr.’s 1965 march from Selma to Montgomery -- was among the eight best picture nominees, but its director, Ava DuVernay, was left off the list for director honors. Alejandro G. Inarritu, the Mexican director of “Birdman,” was the only person of color nominated in the category.

When Inarritu won, he saluted his “Mexican compatriots” in Spanish. “Birdman” also landed best-picture honors, and Inarritu dedicated his award to the people of Mexico. He also asked that immigrants here be treated with the “dignity and respect” they deserve.

He is the second Latin American to win director honors. Mexican filmmaker Alfonso Cuaron, a friend of Inarritu’s, won for “Gravity” last year.

When singer John Legend and rapper Common won for original song for the “Selma” number “Glory,” they pointedly addressed the parallels between the civil rights era and today.

He also referenced the significant increase in black incarceration in recent decades as well, saying: “There are more black men under correctional control today than were under slavery in 1850.”

The moving song and speech left some in the audience in tears. Legend and Common also received a rousing standing ovation.

During the telecast, it appeared as though the academy made a point of highlighting the diversity in the room.

Former Oscar-winning actors of color were paired up often with other presenters giving away awards (N’yong), and woven into Harris’ comedy routine (Octavia Spencer). Idris Elba, Viola Davis, Zoe Saldana, Eddie Murphy, Jennifer Lopez and Dwayne Johnson were among those who introduced talent or gave away awards. Harry Belafonte won a humanitarian award from the academy.

When Harris wandered into the audience and introduced actor David Oyelowo, “who was so fantastic [playing King] in “Selma.” When the audience applauded, Harris said, “Oh, now you like him.”

In the weeks leading up to the awards, some pundits and Hollywood insiders pointed out that noting omissions on the basis of race was misguided and offensive, particularly because director Clint Eastwood (“American Sniper”), actor Jake Gyllenhall (“Nightcrawler”) and others considered front-runners for nominations were also overlooked.

Others pointed to an imbalance in the academy’s voting body. A 2012 Los Angeles Times study found that the academy membership was 94% white and 76% male with a median age of 62. It has added more women and minority group members since.

But the percentage of older white men in the academy has dipped only about 1 percentage point, according to the most recent survey, largely because there are more than 6,000 people in the academy and members get lifetime terms.

On Sunday, Patricia Arquette, who won as best supporting actress for her role as a single mom in “Boyhood,” spoke out for wage equality for women in her speech, eliciting rousing cheers.

This year in particular, issues regarding race equality have come to the fore due to the unrest related to the police killings of unarmed black men in Ferguson, Mo., and New York. The climate ensured that themes in the historical march of “Selma” resonated with audiences today.

The local chapter of Rev. Al Sharpton’s National Action Network had planned to stage a demonstration during the ceremony, protesting the lack of diversity in the nominations. The demonstration was called off at the last minute. Najee Ali, head of the chapter, said director DuVernay contacted him and requested that the demonstration not take place.

Ali said he and other activists hoped to have a “direct dialogue” with top academy members: “We continue to be fervent in our mission for expansion and inclusion within the Academy and the motion picture industry as a whole,” he said in a statement. “Art can change the world and the world is more diverse than this year’s nominees.”