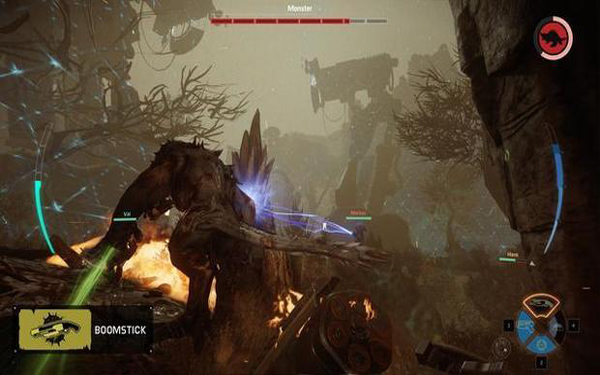 Typically, February is the month for counting the hours until the annual baseball game releases in March. The digital Boys of Summer kick-start the gaming year, with one or two great titles released in each of the spring and summer months until the extremely busy fall and winter seasons.

I spent most of the last few weeks clashing with monsters and exploring dusty ruins in these three games. Here’s what you can expect:

“Evolve” was one of my most-anticipated games of the last year, and I’ve explored every nook and crevice of the science fiction shooter since I received the game a few days before release. I’ve played more than 30 hours and written more than 3,500 words and counting on “Evolve,” but I can’t find anything incredibly poetic to say about the new multiplayer franchise from Turtle Rock Studios.

I loved it at first. The concept of four human hunters battling a giant alien monster on a colonized planet in distant space is right up my alley. The dark presentation and booming audio harken back to Ridley Scott’s “Alien” film franchise and Steven Spielberg’s “Jurassic Park,” which “Evolve” developers clearly drew inspiration from while designing the game.

The controls were simple, and I enjoyed my first 10 hours or so.

And then I made a fatal mistake: I kept playing.

The thrills and unpredictability found in your first dozen games will wane and fade away. Players can choose to either play one of the four unique hunters or assume the role of the overpowering lone monster, but both lose their allure as you continue playing the same game types on the same maps.

If you are into shooters or science fiction, definitely give “Evolve” a look. Just learn from my mistakes and pace yourself.

I kept hearing whispers about the game from other critics on Twitter. It wasn’t until a good friend picked it up and told me to immediately buy the $20 Steam Early Access title that I finally succumbed.

Players assume the role of a young noble called on to inherit the estate of a relative. When you arrive at your ancestral home, you find it totally infested with horrific creatures. It seems your predecessor took a page from Dr. Frankenstein’s book — using his estate and the surrounding grounds to experiment on corpses.

You then set about throwing wave after wave of delightful but tragically disposable young heroes at the marauding creature hordes until your home is restored. The combat and gameplay are as old as gaming itself — turn-based strategy in a fantasy setting. But “Darkest Dungeon” wows its audience by making subtle but immensely satisfying tweaks to the traditional format.

For example, rather than pushing tired old warrior, thief and mage character classes around, “Darkest Dungeon” created new ones. I conquered evil half-human half-pig monsters using my preferred four-character party of an occultist, a leper, a demon jester and a crusader. Each unique class freshens up a game that could otherwise be frightfully repetitive or old-fashioned.

Don’t let the Early Access tag scare you. I’ve played more than 20 hours. It is a full game with working features, even if the developers at Red Hook Studios are still tinkering with it.

‘GAME OF THRONES: THE LOST LORDS’

The second installment in Telltale Games’ six-part adventure game series based on the Game of Thrones TV show was a bit of a letdown, but it’s still worth checking out.

“The Lost Lords” was doomed to be a letdown after the emotionally charged ending to “Iron From Ice,” the first episode in the series. This month’s game is basically a lot of housekeeping duties. The characters must pick up the pieces and gather allies after the bombshell dropped in “Iron From Ice.”

I didn’t enjoy much of “The Lost Lords.” It felt like every choice was doomed to blow up in my face — badly. Telltale is known for this type of thing, but I think its “Game of Thrones” series goes off the deep end. Players want to feel some sense of reward and accomplishment while journeying through a game, but I felt none.

Still, you will want to get through it — if only to prepare yourself for the next four episodes. I have faith that Telltale Games will redeem the franchise in future episodes, so go ahead and spend the $5 to play through the two-hour campaign of “The Lost Lords.”