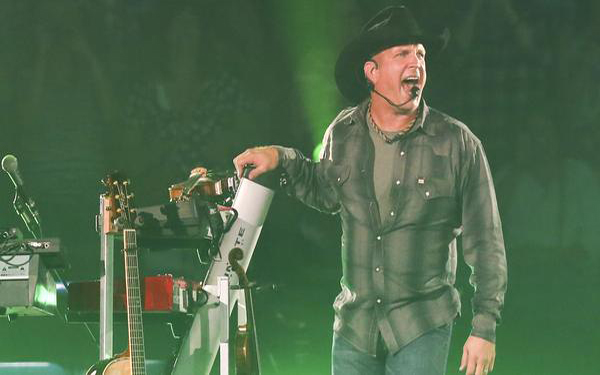 CHICAGO — The town of Rosemont, Ill., paid country superstar Garth Brooks more than $1 million to launch his comeback tour last year at its Allstate Arena, records show, but officials say the village made twice that much.

According to an agreement between the municipality and the singer’s longtime promoter, Brooks received $1,050,000 as a “rebate” for holding 11 kickoff shows at the arena, which is just outside Chicago. The disclosure ended the village’s five-month legal battle to keep secret the financial details surrounding Brooks’ record-breaking concert stand, which sold more than 183,500 tickets.

Under the deal, Rosemont agreed to pay Brooks $100,000 per sold-out show and a prorated sum for shows that didn’t sell out. The village also slashed the arena’s rental fee in an effort to lure Brooks’ September 2014 performances, records show.

The documents’ release comes nearly a month after the Illinois attorney general’s office ruled that the village violated state open-records laws when it refused to provide the Tribune a copy of the agreement.

In a binding opinion Jan. 23, Attorney General Lisa Madigan also ruled that Rosemont had overstepped its authority when it passed an ordinance giving officials the power to withhold documents if they believed their release would put village-owned entertainment venues at a competitive disadvantage.

Rosemont could have fought Madigan’s opinion in court, but officials opted instead to release the documents to the Tribune this week.

Records show the village paid Brooks $1 million for 10 sold-out shows, per the agreement signed in September 2013. One of his concerts did not sell out, so he received a $50,000 payment for that performance, officials said.

Under Brooks’ deal, the singer paid about $40,000 to rent the arena for his first show in early September and as little as $35,000 for the others. Village officials would not provide the standard rental rate for the arena, but documents show Brooks received a discount for all 11 shows.

Rebates and rent discounts are commonplace in the concert industry. Rosemont, however, has not released contracts with other musical acts, which would shed light on whether Brooks received a typical deal.

Ben Farrell, Brooks’ promoter, did not respond to requests for comment.

Before kicking off the tour, Brooks told reporters that several cities were in the running to host his inaugural shows, which marked his first tour in 16 years. But he said he was drawn to Rosemont by Mayor Brad Stephens’ promise to do whatever it took to land the concerts.

“I can’t thank you enough,” Brooks told a smiling Stephens at a news conference before his first show.

With or without the financial incentives, Brooks was poised to make money in Rosemont. With an estimated gross of $12 million, his Allstate Arena shows broke the North American sales record for a single city at the time.

Stephens and arena Executive Director Pat Nagle could not be reached for comment.

Town spokesman Gary Mack defended the deal, saying the village still made more than $2 million from the concert stand after the rebate. The village, however, did not provide documentation to support that figure.

“Rosemont knows how (to) operate government effectively and efficiently, like a business,” Mack said in a statement. “Any day that the village can trade a million dollar investment for more than a $2 million return to its taxpayers it will do so. That’s not only prudent governing, it’s smart business.”

The Tribune and the village have been at odds over the contract since September, when the newspaper submitted an open records request for documents related to Brooks’ concert run. The village initially offered the Tribune a chance to review the contract and other financial documents if a reporter signed a confidentiality agreement and agreed not to write about them. The Tribune declined.

Though Rosemont officials released some records in October, they repeatedly refused to provide unredacted financial information. The Tribune argued that the rental and rebate agreements were public records because the arena is owned by the village and supported by tax dollars.

After the Tribune appealed the decision to the attorney general, the village passed an ordinance giving the mayor and other officials the power to withhold documents if they believe the release would put village-owned entertainment venues at a competitive disadvantage. In addition to the arena, the town owns and operates the Rosemont Theatre and the Donald E. Stephens Convention Center.

From the outset, village officials have argued that releasing the documents could prompt other acts to drive a harder bargain when negotiating to play at the arena. They also contend that releasing financial records would harm the arena because competitors like the United Center would get a glimpse at how they work to get business.

Hoffman Estates officials have said they would refuse to provide booking contracts for the village’s Sears Centre Arena for similar reasons.

The city of Chicago, on the other hand, routinely releases contracts involving acts that perform in Grant Park, and the University of Illinois also considers events held at its UIC Pavilion to be subject to the Freedom of Information Act because the school is a public institution.

The United Center is privately owned and therefore does not have to make such information public.

Brooks, meanwhile, continues his North American tour this weekend in Detroit. Despite only playing eight cities in 2014, Pollstar ranked his tour 22nd among the top-grossing acts worldwide with more than 800,000 tickets sold last year.