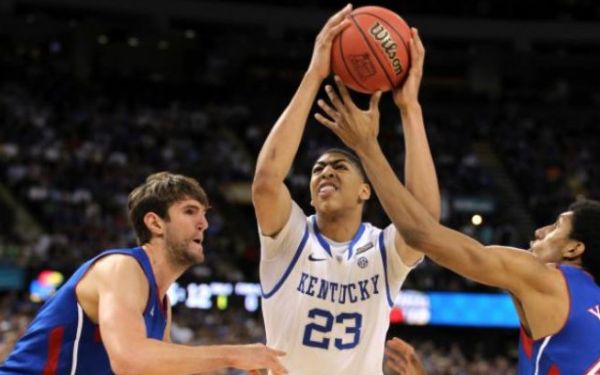 The University of Kentucky has become a haven for one-and-done players.
(Credit: Chet White - UK Athletics)

Lon Kruger arrived at Kansas State from Silver Lake High in 1970 as a three-sport star. He had turned down a baseball contract and was targeted by some colleges as a quarterback.

Instead, Kruger became the first recruit of new Wildcats men’s basketball coach Jack Hartman and spent his first college year in the same place as everybody in his class, on the freshman team.

First-year students in men’s basketball and football didn’t become eligible to complete until 1972, and Kruger recalls those days fondly.

“It was great for us,” said Kruger, who’s now the basketball coach at Oklahoma. “None of us were good enough to play. As I think back on it, it really was a great bonus.”

That’s what supporters of the idea of freshman ineligibility, which has collected steam as a topic over the past few weeks at the power conference commissioner level, love to hear.

Sitting out of varsity competition to become acclimated to the rigors of college life undoubtedly has its advantages. But many basketball coaches are not the same page as commissioners. They don’t want it.

“I think it would be awful,” Kansas coach Bill Self said.

Other coaches asked about this possibility recently have struck a similar chord. If this is about helping incoming students prepare for college, they say that’s already happening.

“One luxury we have with freshmen coming in, we get most coming in a summer and getting them acclimated on campus,” Iowa State coach Fred Hoiberg said. “They’re in a couple of classes and figuring things out.

“I understand the argument about getting a year under your belt, but with the resources we have … kids can adapt quickly.”

Many interpret freshmen ineligibility as a college response to the NBA’s 19-year-old rule, the NBA Draft age limit that has become popularly known as “one-and-done” — one year in college and off to the NBA.

The current system is seen by college coaches and commissioners as an unhealthy relationship with the NBA. In essence, colleges become a feeder system for the pros at the expense of the college game and the athlete’s academic career.

One-and-done players are a miniscule percentage of freshman athletes across the college landscape, but they can make a huge impact. Kentucky won the 2012 national championship with three freshmen, led by Anthony Davis, who were drafted.

The Wildcats have had 14 freshmen drafted since the age-limit rule was adopted by the NBA in time for the 2006 Draft.

Last week, Kentucky coach John Calipari wondered if the idea of freshman ineligibility was intended to help students “or are we worried about individual programs?”

The NBA and new commissioner Adam Silver have talked about a new age limit — 20. That would mean athletes spending at least two years in college, and colleges would love to see this change.

Self went through a list of questions that would have to be addressed if freshmen were ineligible. He thinks more prospects would choose to play internationally rather than come to college and sit out a year.

Would freshmen teams be revived? Is this for all sports? Would scholarships have to be added?

“I know that it worked for a period of time back in the ’60s, early 1970s,” Self said. “I don’t see how in today’s climate that it would be good for our games and overall betterment of student athletes.”