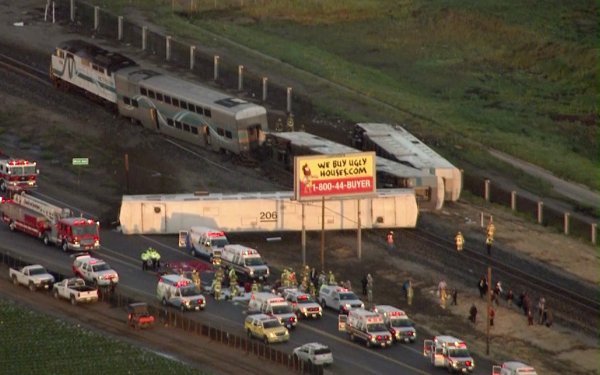 A Metrolink train slammed into a truck that was in flames early Tuesday in Oxnard and derailed, injuring 28 people, four of them critically.

The driver of the truck fled the scene and was taken into custody, officials said.

The train was going 79 mph near the crossing at 5th Street and Rice Avenue at about 5:40 a.m. when its engineer spotted the fiery truck, said Sergio Martinez of the Oxnard Fire Department.

The engineer immediately hit the brakes but was unable to stop in time. Four train cars derailed.

Four people were critically injured, officials said, but there were no fatalities. There were 51 passengers on board and 28 were taken to local hospitals. The other 23 were not injured.

Metrolink spokesman Jeff Lustgarten said the train's engineer was among those injured.

Fire officials at the scene said the train was traveling at its cruising speed of 79 mph when the conductor spotted the flaming truck and anticipated the crash from "a far distance out."

The exact type of vehicle struck by the train wasn’t immediately known. But fire officials said it was not uncommon for farm equipment to travel through the area.

Jorge Garcia, 56, was getting ready for work when he heard something unusual shortly before 6 a.m. He didn't think much of it until he heard the ambulances racing past his home.

"I just heard a bang and then an explosion," Garcia said. "It was a big old boom. And then the ambulances started. ... You could see it was something big."

Multiple emergency units responded. Several tarps were laid out where victims were being treated. Others were on stretchers being wheeled into ambulances.

Three of the four cars that derailed had been equipped with a “crash energy management” system meant to absorb the shock of a crash and redistribute force away from passengers, a Metrolink official said.

The fourth car, a bicycle car, was not equipped with system.

Union Pacific was hoping to make repairs by the morning, fire officials said.

The National Transportation Safety Board, which investigates crashes like this, said in a tweet that agency officials were aware of the incident and were "currently gathering information.”

In 2008, a Metrolink commuter train collided with a Union Pacific freight train on a stretch of shared track in Chatsworth, killing 25 people and injuring others. Investigators said the Metrolink engineer went through a signal light that should have warned him to stop until the freight had moved onto a siding.

A year ago, Metrolink launched a state-of-the-art safety system along sections of its 512-mile network in Southern California at a ceremony that remembered the Chatsworth crash victims.

The Times will update this post soon with more information.