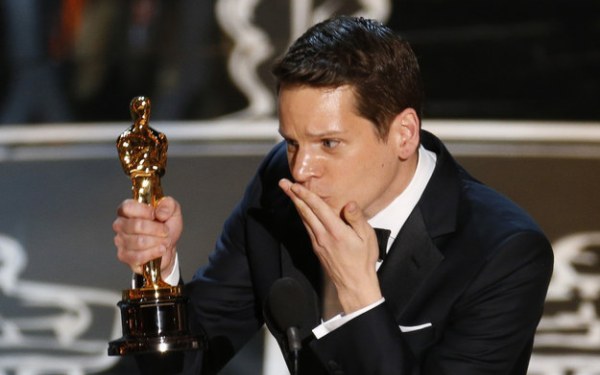 LOS ANGELES — Growing up in Chicago’s Lincoln Park as a movie fan with Hollywood aspirations, Graham Moore had rehearsed this moment many times. Those practiced Oscar speeches, delivered into shampoo bottles, never involved a laundry list of thank-yous.

“This topic was always what I imagined talking about,” the 33-year-old screenwriter said Monday afternoon. “I had a moment on stage of realizing, ‘OK, I’m a writer, which means I’m not going to be on TV that often in my life. I might as well use my 45 seconds to say something meaningful.’ ”

So Sunday night, when Oprah Winfrey handed him a golden statuette for best adapted screenplay for “The Imitation Game,” Moore shared something very personal with the fabled billion people watching.

“When I was 16 years old, I tried to kill myself because I felt weird, and I felt different, and I felt like I did not belong,” he said, speaking without notes. “And now I’m standing here, and so I would like for this moment to be for that kid out there who feels like she’s weird or she’s different or she doesn’t fit in anywhere. Yes, you do. I promise you do. You do. Stay weird. Stay different. And then when it’s your turn and you are standing on this stage, please pass the same message to the next person who comes along.”

After he finished speaking these words, he walked away unsure of how he’d done.

“I was on stage, my heart was racing so fast, and the lights were so bright that I couldn’t really tell what the reaction of the audience was,” Moore said Monday. “But as soon as I got backstage, it sort of hit me that people appreciated it.”

This, in writers’ lingo, is known as understatement.

“The best Oscar speeches are the ones you don’t see coming,” Hitfix’s Louis Virtel wrote in naming Moore’s acceptance as one of the telecast’s highlights.

The Twittersphere erupted in praise and repetitions of “Stay weird,” while outlets such as US Weekly proclaimed that this relatively unknown writer was “about to become a household name.”

“I couldn’t be more proud of what he said and how he chose to use his moment in the spotlight to help people who feel that they don’t fit in for whatever reason,” said Sher, who accompanied her eldest son to the ceremony.

Cohen, Sher’s husband, was watching with other family members from their Lincoln Park home. “When he got it, we were just ecstatic,” Cohen said. “Everyone was screaming and yelling and high-fiving, and of course, we saw Susan (in the audience) crying with pride, and then he went up, and he said what he said.”

Moore’s stepfather paused. “I was so proud of him, using that act of speaking to make his words meaningful to others who have suffered that which he suffered,” Cohen said. “That is transcendent.”

Moore’s “The Imitation Game” screenplay centers on Alan Turing, the brilliant British mathematician largely responsible for cracking the complex Enigma code used by the Germans in World War II to transmit strategic information. Turing, who was persecuted and prosecuted for being gay, is believed to have committed suicide in 1954.

In one of those signs of the cultural times, assumptions about Moore’s affinity for his subject and speculation about his just-revealed suicide attempt led BuzzFeed to report late Sunday night that Moore said he is not gay.

The gossip site TMZ found this tidbit to be such a revelation that it repurposed BuzzFeed’s reporting thusly: “And you thought Michael Keaton not winning the Oscar was the biggest surprise ... the guy who won for Best Adapted Screenplay is not gay!”

Moore shrugged off such reactions.

“So many people, myself included, feel different or strange or a sense of not belonging for so many reasons,” he said on Monday. “As someone who felt like an outsider myself, (Turing) was always a tremendous hero of mine. I don’t think one needs to be gay to have a gay hero.”

Moore’s struggles involved a condition experienced more widely than it is discussed.

Moore attended the University of Chicago Lab Schools in Hyde Park and has described himself as a “computer nerd” who attended Space Camp and generally hung out with misfits and outsiders.

Sher said that in high school her son was “always self-deprecating, very funny. He’s really quite funny. Always had a group of very, very nice, supportive friends. Lab School was a wonderful, nurturing environment for him.”

Gary Moore, who also watched the Oscars from Chicago with family, said his son experienced some difficult times in high school. “I think he felt emotionally bullied,” he said.

David Derbes, Moore’s former high school physics teacher, recalled on the school’s website that Moore was “unusually observant” and would offer thoughts about whether classes had gone well and why.

“He was a very friendly young man — even if not always the most outgoing — and always thinking, mind racing at high velocity, caffeine-fueled,” Derbes said.

Neither Moore nor his family members wished to discuss the details of his suicide attempt.

“I think depression is something I was dealing with for a while, and after my suicide attempt, it became apparent that this was something that was very serious,” Moore said.

“Teenage years are rough,” Sher said. “And then they come out of it and become incredible human beings.”

She said there never was a specific moment when she thought her son had overcome his troubles. “From my perspective it was gradual,” she said. “As a parent one always worries.”

Moore attended Columbia University, and, Sher recalled, “he thrived in New York. He became the arts editor of the Columbia Spectator, made lots of friends there, had a band (in which he played guitar), worked as a bike messenger, was sound engineer at B.B. King’s club all while he said he was working on a novel. And sure enough he published a novel that was on the New York Times best-seller list.”

“The Sherlockian,” a witty tale of sleuthing set in the world of Sherlock Holmes, was published to acclaim in 2010. Cohen said his stepson wrote the opening scene of “The Imitation Game” on a plane ride from Chicago to Phoenix during a book tour.

“Turing was his muse, and he chose a good one,” Cohen said. “(Everyone) said how silly it was to do a story about a mathematician in the war who was gay and committed suicide. ‘That won’t play in Hollywood,’ he was told. But he persevered with the project because of its importance.”

Now Moore has won an Oscar for that work, but even experiencing such a dreamed-about, glorious moment is no cure-all.

“One of the things that’s important about depression is it exists entirely independent of the external,” Moore said. “It’s not like winning a trophy makes depression go away, and I think that’s one of the hardest things for people dealing with it. There’s no external validation that makes it disappear. You have to deal with it internally.”

Yet Sher said she thinks Moore is well-equipped to deal with a new level of success and attention. “I saw him this morning, and he’ll go to his yoga class, and he has a friend in town, and he’s finishing his second book. I think he’s so grounded that he’ll handle it well.”

And in the meantime, his words and actions Sunday night may help others as well.

“It’s been really overwhelming, certainly the number of emails and texts I’ve gotten from friends but also the strangers who came to me last night and shook my hand and told me they appreciated it,” Moore said. “I had strangers come up to me at parties and events and say, ‘Hi, I’ve grappled with these same issues in my life, but I’ve never talked about them publicly. Thank you.’”

Special Features
Secret screenings. Redacted scripts. How they make the twists in ‘This Is Us’
59 views

Special Features
NBC has a novel solution to the dearth of female directors: Let them direct
343 views

Special Features
Virtually every film coming out this fall
711 views