Sharknado 3 gets a taste of Orlando 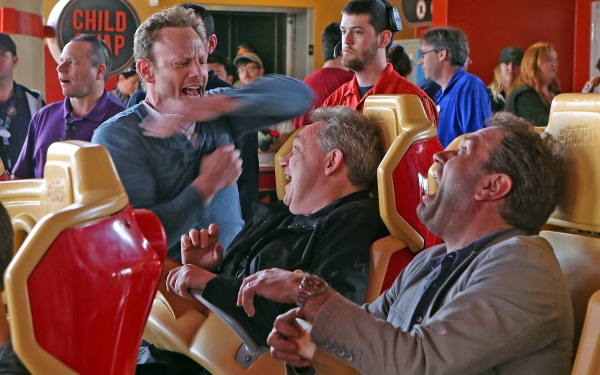 ORLANDO, Fla. — The people making “Sharknado 3” have come to celebrate Universal Orlando and to bury it.

“We are having sharks and a sharknado come to Universal Orlando and destroy the park,” said director Anthony C. Ferrante on Tuesday as the TV movie completed seven days of shooting in central Florida.

When the disaster film premieres this summer on the Syfy channel, the theme park will go by its name.

“Of course it’s totally promotion, but they get it because it’s part of the NBC family,” Ferrante said. (Syfy and the resort are part of NBCUniversal.) “And they have a good sense of humor about it.”

Humor — in the acting, dialogue and effects — has everything to do with the “Sharknado” franchise. The movies rain absurd situations, off-the-wall dialogue and special-effects sharks.

“You’ve got to look at it and think it is so crazy,” said Tara Reid, who plays a pregnant April in the new movie. “You play it straight.”

The effects present special challenges, she added. “You’re looking at sharks that aren’t even there. You hope you’re looking in the right place,” Reid said.

The first movie in 2013 sent sharks flying through Los Angeles, transformed Ian Ziering into the heroic Fin and became a social-media sensation. The first sequel in 2014 swept through New York and decapitated the Statue of Liberty. The mayor (played by Robert Klein) vowed, “This is the Big Apple. Something bites us, we bite back.”

The second sequel, set to debut in July, devastates Washington, D.C., then moves on to Orlando. Wrestler Chris Jericho portrays a ride attendant, and the Irish singing duo Jedward makes a cameo appearance. Viewers will see how the Orlando theme park accommodated filmmakers.

“The thing that is cool is they’re working with us on everything,” Ferrante said. “They’re always talking, ‘None of our stuff can kill people, but sharks and the tornado can.’ As long as we do that we’re cool.”

The Universal Orlando team had an issue with a ride’s track breaking, but the theme park was fine if the ride hit a pile of sharks and went flying into a building, the director said.

“That’s kind of awesome, because their business is making movies and it’s a movie theme park, they get it,” Ferrante said. “They let us get inside the Universal globe and shoot a sequence.”

The interest is so great that a video of Reid putting her head in the Jaws shark has gone viral. “It’s really great to be a part of something that’s special and people love,” she said.