Leslie Knope, other ‘Parks’ figures were genuine, and that made viewers care 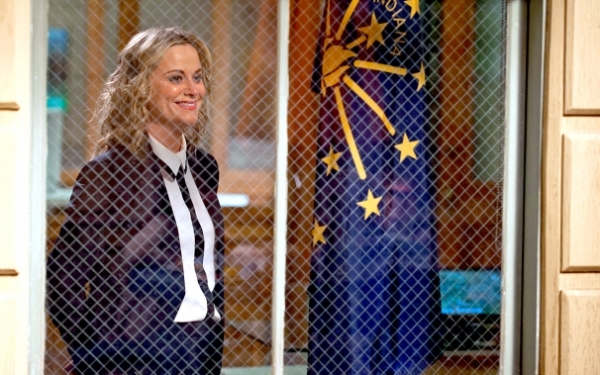 A story about people who love one another made by people who clearly love one another, “Parks and Recreation” ended its seven-season, zigzag run through prime time Tuesday night on NBC. In the final shot, star Amy Poehler, as public servant Leslie Knope, faced the camera, all aglow, and addressed Leslie’s future and perhaps her own: “I’m ready,” she said.

Written by Poehler and series co-creator (along with Ed Daniels) Mike Schur, the finale was, as finales often are, a kind of metaphor for the moment: “We need to celebrate everything we’ve done as a group,” Leslie says to her co-workers, a character talking to characters and an actor talking to actors as all are about to part. As is also often the case with finales, the episode was constructed as a gift — a gift from its makers to one another and to their audience. There is love there too, passing each way through the screen.

That a comedy about a parks department in an Indiana small town would not be a ratings smash was not inevitable, but it is not, in its way, inappropriate; as in the series itself, it was never about how many, but how much we who cared, cared.

Optimistic and innocent, familiar and ridiculous, “Parks and Rec” was a Frank Capra film as imagined by Preston Sturges stretched into a series and filtered through the pickup basketball sensibilities of a modern writers room and a cast of gifted players. It was the last of NBC’s great if often struggling prestige comedies, including “The Office” and “30 Rock” (whose godchild “Parks and Rec” can be said to be), that once made Thursday night a date worth keeping.

What plot the complicated and busy last episode offered was just in service of the party. Every handshake and hug felt real, every tear unforced. Jumping forward into the characters’ various but still intertwined futures (from the already future-set 2017, in which the final season had been set), it showered them all with happiness, success and dreams come true and then brought them back together for a last group adventure, in a park, to fix a swing.

There was time, one last time, for Chris (Rob Lowe) to say something was “literally true,” and for Ben (Adam Scott) to look at the camera in an attitude of “What just happened?” and for an entire auditorium to mock the endlessly mocked Garry (Jim O’Heir), whose present from his creators is that he gets to be mayor for the rest of his life and live to 100. Time for one last visit to the fourth floor, for one last appearance of Burt Macklin and for a Joe (and Jill) Biden cameo. There were waffles too, if you were paying attention.

And there was Ann Perkins (Rashida Jones) back again, and one more time for Leslie to praise her beauty and hold her close. It was Ann who began this story long ago by complaining of a hole in a lot next to where she lived, with then-boyfriend Andy (Chris Pratt), a self-centered slacker and not yet the endearing dimwit he would later become. It seems so long ago.

There is a space of course between TV characters and the people who play them — though Aubrey Plaza’s Twitter handle is @evilhag, she is not the Wednesday Addams that April Ludgate is; Nick Offerman, though he lent bits of himself to Ron Swanson — I would guess that the canoe he paddled in the finale was one he made himself — is not that guy.

But Leslie Knope seems very much an extension of, an expression of Amy Poehler, who wrote a memoir called “Yes Please” and co-created a website and YouTube Channel for young women called Smart Girls. The show has shaped itself not just to her gifts, but to her person.

Even as the show around her got more antic, surreal and absurd, Leslie grew more grounded, more sure, more effective — she became a leader, a model, a mentor, an organizer not just of policies and projects and ring binders, but of her friends’ well-being. The character we met in 2009 might have dreamed of becoming president but never could have been; the one who left us Tuesday night could.

“The best prize life has to offer is a chance to work hard at work worth doing,” Leslie says near the finale’s end, quoting Theodore Roosevelt. She is delivering a commencement address, having served two terms as governor of Indiana and, the script hints but never states, is about to run for president (and win). “And I would add that what makes work worth doing is getting to do it with people you love.

“Find your team,” she tells them.

It’s an echo of Poehler’s own 2011 Harvard Class Day speech. “Find a group of people who challenge and inspire you,” Poehler said then. “Spend a lot of time with them, and it will change your life.... Listen, say yes, live in the moment, make sure you play with people who have your back, make big choices early and often.

“You never know what is around the corner unless you peek. Hold someone’s hand while you do it. You will feel less scared. You can’t do this alone. Besides, it is much more fun to succeed and fail with other people. You can blame them when things go wrong.”