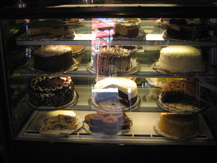 Sorry Los Feliz, but your best-kept secret is out. Alcove Café and Bakery is one of the most adorable and delicious cafes in all of Los Angeles. Take a stroll up to this small restaurant on a winding brick path. Revel in the faint glow from the warmth of the outdoor heating lamps. Be ready for a mouth-watering wait near the dessert case as you contemplate a menu in which everything sounds phenomenal ... and that’s because it is.

For a little over a year, Alcove has served as Los Feliz’s perfect spot for studying, sipping a cup of tea or enjoying the most scrumptious array of sweets imaginable. Alcove’s outdoor patio conjures scenes from Alice in Wonderland.

Tables and chairs are painted yellow and green, sprawling umbrellas shade the courtyard, lighting is low and it feels as if you are dining in a hideaway garden of your very own. Although Alcove offers take-out, don’t pass up the opportunity to people-watch on busy Hillhurst, surrounded by flowers and interesting people, all in a soothing environment that is so very un-L.A.

Alcove’s menu is playful and enticing. The fare is put into categories like “Farm Fresh Eggs,” “Hollywood Bowls” “and “More stuff Between Bread.” You want breakfast all day? You’ve got it. Omelettes and scrambles are served with oven roasted rosemary potatoes and toast.

In the “Still Can’t Find What You Want” section, try the “Power Breakfast” for $9.95. This feast includes grilled marinated chicken breast, egg whites, fresh fruit and whole wheat toast. Salads are served in mod, huge white bowls and are a refreshing detour from L.A.’s traditional greenery.

Can’t take your eyes off of your neighbor’s plate? Most likely it is one of Alcove’s many sandwiches. The panini and melts are grilled on focaccia and come with Yukon gold French fries, onion rings, coleslaw or salad. The “turkey hummus melt” explodes with creamy and nutty hummus, aged cheddar, basil and smoked turkey.

But let’s get down to business. Alcove’s desserts are more than decadent. Look in the dictionary under confectionary excellence and Alcove will be there in big neon lights! Desserts vary from day to day, and there are currently more than 30 in rotation.

The top-sellers include berry blossom meringue, raspberry sour-cream cheesecake, five-layer chocolate cake with espresso and Belgian mousse (talk about an eye-opener) and lemon coconut cake. One night, a chocolate cake was studded with generous bits of Twix Bar. Curious about that chocolate-covered cookie sandwich on display? It’s a moonpie, and it’s out of this world. Who doesn’t love two chocolate chip cookies sandwiching marshmallow dipped in colored chocolate?

Chef Ken and Owner Tom Trellis also announced that Alcove will offer a new dinner menu within the next month. Expect some great changes, but we hope nothing too drastic. As baby bear says (and this place is cute enough even for him), Alcove is juuuust riiiight.

Thinking of making your own little alcove at home? The Village Gourmet Cheese & Wine Shop next door offers a selection of esoteric oils and vinegars, pastas, cheeses, imported olives, and delectable sandwiches.

How often does a little brick road lead to a charming café in Los Angeles? Well, head over to Hillhurst Avenue in Los Feliz, and let Alcove’s whimsical courtyard and plentiful menu melt your stressful day away. And don’t forget those desserts.

Budget
Mexicali Taco & Co.: Everything But the Tacos
4,299 views

Budget
Tom Bergin's: "Where Everybody Knows Your Name"
2,638 views