Angels' Josh Hamilton will need an improbable comeback to prove worth 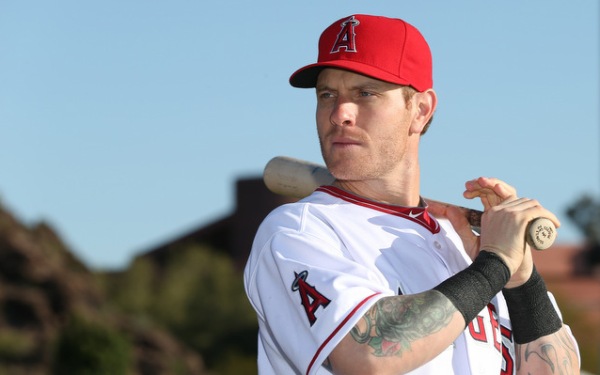 As all his teammates assembled for the first time this season, in a clubhouse in Arizona on Wednesday, Josh Hamilton sat in a meeting room in New York, in street clothes, his baseball future on the line.

He could have put on a brave face, and uttered a few words of happy talk to appease the fans, and maybe the team too. But, to the question of what the Angels might reasonably expect from him for the 2015 season, Hamilton shrugged, offering only a weary smile.

The new year first brought shoulder surgery, and now this: As The Times first reported, Hamilton met with league officials Wednesday as the Angels braced for significant disciplinary action against the outfielder.

Hamilton has a well-documented history of drug and alcohol abuse, and his well-being is the first and foremost concern.

The secondary question leads the Angels back to where they were last October, on the heels of a division series sweep by the Kansas City Royals. What might the Angels reasonably expect from Hamilton?

He has three years left on a five-year, $125-million contract with the Angels. The contract of Philadelphia Phillies first baseman Ryan Howard -- also five years and $125 million -- is widely considered one of the worst in major league history.

Howard's contract runs for two more years. Over the past two years, Howard has batted .237 with 34 home runs -- for the Angels, uncomfortably close to Hamilton's numbers.

Howard, at least, should be playing on opening day. Whenever Hamilton plays again -- and depending on how much he has left to offer -- he should have yet another chance, for yet another improbable comeback story.