For Asian-Americans, a changing landscape on college admissions 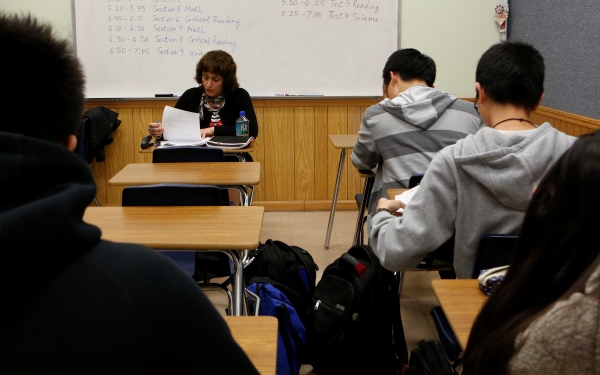 LOS ANGELES — In a windowless classroom at an Arcadia tutoring center, parents crammed into child-sized desks and searched through their pockets and purses for pens as Ann Lee launches a PowerPoint presentation.

Her primer on college admissions begins with the basics: application deadlines, the relative virtues of the SAT versus the ACT and how many Advanced Placement tests to take.

Then she eases into a potentially incendiary topic — one that many counselors like her have learned they cannot avoid.

“Let’s talk about Asians,” she says.

Lee’s next slide shows three columns of numbers from a Princeton University study that tried to measure how race and ethnicity affect admissions by using SAT scores as a benchmark. It uses the term “bonus” to describe how many extra SAT points an applicant’s race is worth. She points to the first column.

She points to the second column.

“Hispanics received a bonus of 185 points.”

Asian-Americans, Lee says, are penalized by 50 points — in other words, they had to do that much better to win admission.

“Do Asians need higher test scores? Is it harder for Asians to get into college? The answer is yes,” Lee says.

“Zenme keyi,” one mother hisses in Chinese. How can this be possible?

College admission season ignites deep anxieties for Asian-American families, who spend more than any other demographic on education. At elite universities across the U.S., students of Asian descent form a larger share of the student body than they do of the population as a whole. And increasingly they have turned against affirmative action policies that could alter those ratios, and accuse admissions committees of discriminating against Asian applicants.

That perspective has pitted them against advocates for diversity: More college berths for Asian-American students means fewer for black and Latino students, who are statistically underrepresented at top universities.

But in the San Gabriel Valley’s hyper-competitive ethnic Asian communities, arguments for diversity can sometimes fall on deaf ears. For immigrant parents raised in Asia’s all-or-nothing test cultures, a good education is not just a measure of success — it’s a matter of survival. They see academic achievement as a moral virtue, and families organize their lives around their child’s education, moving to the best school districts and paying for tutoring and tennis lessons. An acceptance letter from a prestigious college is often the only acceptable return on an investment that stretches over decades.

Lee is the co-founder of HS2 Academy, a college prep business that assumes that racial bias is a fact of college admissions and counsels students accordingly. At 10 centers across the state, the academy’s counselors teach Asian-American applicants countermeasures. The goal, Lee says, is to help prospective college students avoid coming off like another “cookie-cutter Asian.”

“Everyone is in orchestra and plays piano,” Lee says. “Everyone plays tennis. Everyone wants to be a doctor, and write about immigrating to America. You can’t get in with these cliche applications.”

Like a lot of students at Arcadia High School, Yue Liang plans to apply to University of California campuses and major in engineering — or if her mother wins that argument, premed. She excels at math, takes multiple AP courses and volunteers, as does nearly everyone she knows.

Being an Asian-American applicant, the junior says, is “a disadvantage.” The problem, she says, is in the numbers.

Asian families flock to the San Gabriel Valley’s school districts because they have some of the highest Academic Performance Index scores in the state. But with hundreds of top-performing students at each high school, focusing on a small set of elite institutions, it’s easy to get lost in the crowd.

Of the school’s 4,000 students, nearly 3,000 are of Asian descent, and like Liang are willing to do whatever it takes to gain entrance to a prestigious university. They will study until they can’t remember how to have fun and stuff their schedule with extracurriculars. But there’s an important part of their college application that they can’t improve as easily as an SAT score: their ethnicity.

In the San Gabriel Valley, where aspirationally named tutoring centers such as Little Harvard and Ivy League cluster within walking distance of high schools, many of them priced more cheaply than a baby sitter, it didn’t take long for some centers to respond to students’ and parents’ fears of being edged out of a top school because of some intangible missing quality.

Helping Asian-American students, many of whom lead similar lives, requires the embrace of some stereotypes, says Crystal Zell, HS2’s assistant director of counseling. They are good at math and bad at writing and aspire to be doctors, engineers or bankers, according to the cliches. She works with her students to identify what’s unique about them — and most of the time, that’s not their career ambitions or their ethnicity.

“Everyone comes in wanting the same thing,” Zell said. “But that’s because they don’t know about anything else.”

If a student wants to be an engineer, she makes sure to show them other options. She sends affluent students to volunteer in poor neighborhoods. Branch out from tennis, or chess club, or tae kwon do, she tells them. Learn a language other than Chinese. Avoid writing your essay about your parents’ journey to America.

Instead of just handing students a violin or a piano and saying pick one, Zell says, HS2 offers them a buffet of interests and hobbies, encouraging students to pick something that excites them.

Lawrence Leonn, 16, is grateful for the help. He doesn’t think ethnicity should matter, but he believes it will.

“I don’t want to be racist or anything,” Lawrence said. “Everyone works hard and struggles. But there’s this feeling that it’s going to be harder for us.”

Complaints about racial bias in college admissions have persisted since the 1920s, when a Harvard University president tried to cap the number of Jewish students. In November, a group called Students for Fair Admissions filed a suit against Harvard University for admissions policies that allegedly discriminate against Asian-Americans. The group cited the 2004 Princeton study and other sources that offer statistics about Asian-Americans’ test performance.

At the University of Texas at Austin, an affirmative action policy that allows admissions committees to consider the race of prospective applicants has been argued all the way to the Supreme Court (the policies were upheld by a lower court, but that court’s decision was voided by the Supreme Court. Another court upheld the policies and another appeal is pending.)

Those who defend “holistic” admissions policies insist that considering a broader range of variables ensures that all applicants are judged fairly. And the Princeton study Lee refers to has been widely criticized by academics who argue that it relies too heavily on grades and test scores to draw conclusions about racial bias and that the data the study uses are too old to be relevant.

Still, anxiety over racial admissions rates is peaking as cash-crunched public universities increasingly favor high-paying out-of-state and foreign students at the expense of local applicants of every ethnicity. A 2014 bill that would have asked voters to consider restoring race as a factor in admissions to public California colleges and universities sparked multiple public protests and scathing editorials in Chinese newspapers. The bill, Senate Constitutional Amendment 5, was shelved last year.

Lee says that she usually tries to at least mention arguments in favor of diversity at her free college seminars. She mentions how the black student population at UCLA has declined precipitously and how student bodies at elite universities probably shouldn’t be 100 percent Asian. When she looks to see their response, she sees mostly slowly shaking heads.

“It’s really hard for me to explain diversity to parents whose only goal is getting their son into Harvard,” Lee says.

That same ethic causes parents and students to agonize over which box, if any, to check on the race/nationality section of the application. One parent asked Zell if it would help to legally change their last name to something more Western-sounding.

Mollie Beckler, a counselor at San Marino High School, says that Harvard never imposed such a rule. School counselors are constantly trying to dispel myths like these, she says, if only in hopes of slightly lowering the huge stress students shoulder because of their intense focus on elite schools.

“The feeling of failure they get from trying to reach such high standards,” she said, “is very concerning to us in the counseling world.”

Only a few of the San Gabriel Valley’s tutoring centers confront the ethnic admissions issue head-on.

Jamie Aviles, a counselor at the ACI Institute, doesn’t teach ways to overcome perceived racial bias, she says. But she and many other counselors do agree on at least one thing.

As Aviles puts it: “It sucks to be a kid in the San Gabriel Valley.”