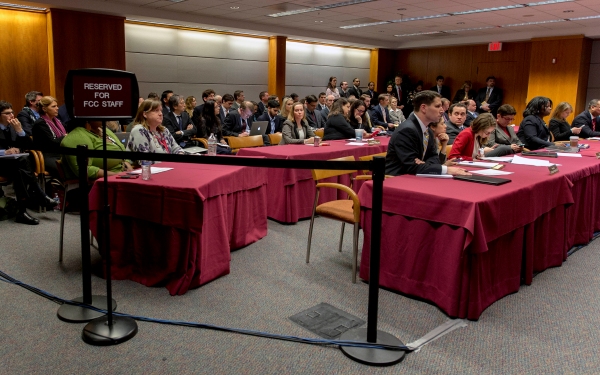 WASHINGTON — In a victory for online companies and tech activists, the Federal Communications Commission voted 3-2 Thursday to approve net neutrality rules that allow for the federal regulation of broadband Internet providers.

Chairman Tom Wheeler called the vote the “irrefutable reflection of the principle that no one — whether government or corporate — should control free, open access to the Internet.”

“Today is a historic day for the Internet Age,” Rep. Doris Matsui, D-Calif., said in a statement, echoing the elation of net neutrality supporters, who see it as a big win against the powerful telecom giants and their lobbyists.

The three Democratic and two Republican commissioners voted along party lines. Republicans Michael O’Rielly and Ajit Pai maintained that the FCC is trying to fix something that isn’t broken by passing rules “because President Obama told us to.”

In a statement posted online in badly smudged typewriter font, to make a point about “badly antiquated regulations,” Verizon called the decision a “radical step that presages a time of uncertainty for consumers, innovators and investors.”

The FCC decision “is a rejection of the compromise win and an embrace, however reluctant, of the political fight,” AT&T said in a statement.

The Internet is being taken “back in time to the era of land lines,”agreed House Majority Leader Kevin McCarthy, R-Calif.

So which is it? Do these rules ensure the strong protection of the open Internet or stifle it with pointless regulations, and what’s next?

Q: First of all, what is net neutrality?

A: Net neutrality simply means treating all Web traffic the same. Also known as open Internet, the concept is that all content should be equally easy to access, without service providers blocking some websites and services or favoring others.

Q: What did the FCC vote on?

A: Thursday’s vote clears the way for the commission to do two main things. First, it will reclassify the Internet as a telecommunications service. This means that for the first time, the Internet can be regulated the same way that public utilities such as telephone lines are. Second, the agency can then use that regulatory power to enforce strong net neutrality.

Q: What do these net neutrality rules mean?

A: Internet service providers such as AT&T, Comcast and Verizon can’t intentionally slow down your videos, games or websites. They can’t block legal content or throttle the traffic of competing apps and services. For the first time, the rules will apply to both broadband and wireless Internet, which includes the mobile data to your smartphone or tablet.

The new rules also stop ISPs from charging companies with deep pockets, such as Netflix and Amazon, extra for “fast lanes” to speed up their traffic. The goal is to preserve the even playing field that in the past has allowed startups such as Facebook and YouTube to get off the ground.

Q: What does this change for me?

A: The net neutrality victory won’t make “House of Cards” stream on your Netflix any faster. While the FCC decision is a major turning point in how the Internet is governed, the new rules won’t affect your everyday Web surfing right now. Customers already pay for different Internet speeds. It just puts laws in place that prevent ISPs from discriminating against streaming video, music or Web content.

Opponents claim that reclassifying the Internet may result in taxes and fees for consumers, allegations that FCC’s Wheeler has denied. Your Internet bill is still likely to go up, because of the lack of competition in most markets in the country. On the other hand, the ruling is likely to lead to more transparency between ISPs and consumers.

Q: Who’s been pushing for the FCC’s net neutrality rules?

A: Almost every Internet company imaginable mobilized in support of net neutrality, ranging from online giants Netflix, AOL and Twitter to startups and online communities such as Etsy, Tumblr and reddit. As content creators, they want as many people as possible to access their material without being slowed down or paying higher fees.

For the past year, Internet advocacy groups and activists campaigned to bring national attention to what many considered a dull regulatory issue, with resounding viral success. Between petitions and Twitter crusades, the FCC website crashed several times under a record-breaking flood of over 3.7 million public comments.

Net neutrality proponents got their biggest boost when President Barack Obama joined the debate. In a high-profile YouTube video posted in November, Obama called on the FCC to impose “the strongest possible rules to protect net neutrality,” arguing that ISPs shouldn’t be allowed to “pick winners and losers in the online marketplace for services and ideas.”

Q: What’s the big deal? Hasn’t the Internet been fine up to now without these rules?

A: While net neutrality isn’t a new concept, its supporters think the “free and open” Internet is increasingly threatened by broadband giants bent on profit. In the last few years, ISPs have gotten in trouble for blocking competing apps and throttling traffic to competitors. In one instance in 2012, Netflix CEO Reed Hastings accused Comcast of promoting its own Xfinity TV service by restricting streaming from popular online video sites. The FCC passed net neutrality rules in 2010, but they were challenged by Verizon and struck down by a federal court in January 2014. Thursday’s vote to reclassify the Internet is meant to put net neutrality rules on firmer legal footing by giving the FCC regulatory power.

Q: Who is opposing the FCC’s net neutrality rules?

A: Big broadband companies including AT&T, Verizon, Comcast and Cox, free-market groups and many Republicans see net neutrality rules as unnecessary government intervention in something that works fine on its own. Opponents say the Internet has thrived precisely because of the lack of such regulation, which will stifle innovation and discourage investment in the industry. FCC commissioner Pai has said repeatedly that net neutrality “is a solution in search of a problem.”

Many Republicans, who generally oppose this kind of business regulation by the government, have been vocal about their opposition to Wheeler’s proposal. Sen. Marco Rubio, R-Fla., said FCC oversight “threatens to restrict Internet growth and increase costs on Internet users.” Sen. Ted Cruz, R-Texas, went a step further and called net neutrality “Obamacare for the Internet.”

Republicans are painting the FCC’s vote as another example of inappropriate overreach by the White House on an independent agency.

A: Expect a drawn-out legal battle. Telecom giants including Comcast, AT&T and Verizon have already threatened to sue. Congress also might challenge the new rules. Republicans have proposed their own bill, which would protect net neutrality while stopping the FCC from exerting its regulatory powers online.

If there’s one thing all sides agree on, it’s that the debate over the role of government in the Internet has just begun.