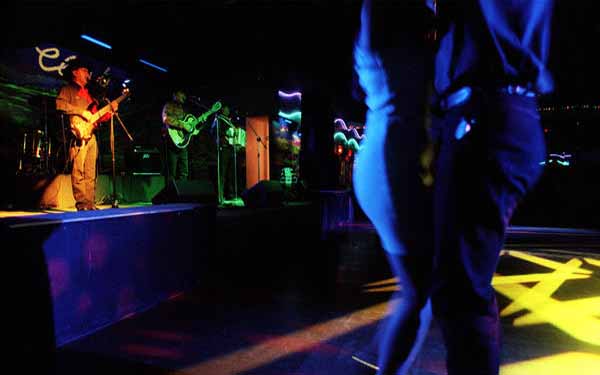 Dancers at El Rodeo nightclub in Pico Rivera move to the sounds of the music. The club's owner was arrested on suspicion of laundering money as part of a drug-trafficking ring.
(Credit: Lawrence K. Ho / Los Angeles Times)

A Pico Rivera nightclub owner was arrested this week after federal officials say he laundered hundreds of thousands of dollars as part of a drug-trafficking ring operating in the United States and Mexico, according to court documents released Thursday.

Following an investigation lasting more than three years, Edgar Fragoso was arrested Monday when the Drug Enforcement Administration raided his nightclub, El Rodeo, and his Hacienda Heights home, said Special Agent Vijay Rathi. The Pico Rivera home of Fragoso’s mother -- whose name is listed on some of his bank accounts -- was also raided.

Fragoso has been charged with one count of money laundering. If convicted, he faces up to 20 years in federal prison.

The apparent takedown of Fragoso and his nightclub -- an establishment that's been marred by violence for years -- is regarded as a major victory in the battle against the regional and cross-border drug trade.

"Dismantling operations like the one operating in the El Rodeo Night Club directly affects the profit margins of major drug cartels, making it much harder for them to do business in this city,” Stephen G. Azzam, the acting special agent in charge of the DEA’s Los Angeles branch, said in a statement.

According to a 52-page sworn affidavit by federal investigators filed on Feb. 20, the nightclub served as a drop-off point where undercover operatives for the DEA would fork over as much as $150,000 in cash at a time.

Fragoso would return the money incrementally in cashier’s checks made payable to a name that, unknown to him, was linked to bank account set up by federal agents, the affidavit said.

On the night of Dec. 13, 2013, for example, two undercover operatives wearing recording devices dropped off $50,000 at El Rodeo. A week later, they met Fragoso at a Denny’s restaurant near his home to pick up a $25,000 check from one of his real estate partners, the affidavit said.

The remainder of the money -- minus Fragoso’s 7% commission -- came from a checking account held by a company registered in Fragoso’s mother's name, according to the affidavit.

The nightclub, located in a large shopping center near the intersection of Washington and Rosemead boulevards, has been a hotbed of violence. A valet was killed there in 2013, and a decade before, a shooting left one person dead and two others injured.

"Locals know better than to come here," said Richard, a 55-year-old Pico Rivera resident who declined to give his last name as he walked by El Rodeo on Thursday night.

Fights are common at the club, which typically receives a high number of calls for services from law enforcement, said Gregory Salcido, the mayor of Pico Rivera.

"We're always one weekend away from something really bad happening in there," Salcido said.

Still, he said, the management appeared to be running an above-board business: "I never saw anything out of them that would make me think they would be involved in nefarious activity.”

But according to the affidavit, Fragoso openly discussed the various methods he could employ to launder the illicit funds, all while undercover operatives recorded his words.

At first, he suggested a real estate transfer: The undercover operatives could buy one of his homes under market value.

“You could pay me what I paid for it on paper. You could get it and sell it for what it’s worth. That’s easy,” Fragoso said, according to the affidavit.

The nightclub itself could also serve as a legitimate front, Fragoso said in one conversation. If the drug traffickers billed themselves as a club promoter, the dirty cash could be handed over and counted in Fragoso’s books as admission fees, according to the affidavit. The organization would then be compensated for promoting the event.

A third method, Fragoso suggested, was to pay the check to someone posing as a construction worker or handyman.

“But that person must know how to work ... the one I put down [on the check],” said Fragoso, suggesting that they develop business cards to provide added legitimacy.

The investigation was triggered by the 2012 arrest of two people who were trafficking methamphetamine in Texas, according to the affidavit.

The two, whose names were not released, told investigators that the alleged leader of a Mexico-based drug-trafficking organization, Ramon Gonzalez, was using Fragoso to clean up money from the sale of methamphetamine, the affidavit said.

Some of the cash was in turn deposited into a bank account held by Gonzalez’s wife, whose Hacienda Heights home was also raided Monday, authorities said.

Others were likely using Fragoso to launder their money, the affidavit alleged. In one recorded conversation, Fragoso appeared to imply that others sent by Gonzalez were funneling money through his business.

“There are several,” Fragoso said. “Well, I’m at their service.”

Fragoso's attorney did not respond to after-hours requests for comment.

Fragoso was released after posting $100,000 bail, and he’s scheduled to be arraigned March 13, according Thom Mrozek, a spokesman for the U.S. attorney's office in Los Angeles.