Court-storming: Is there even a solution? 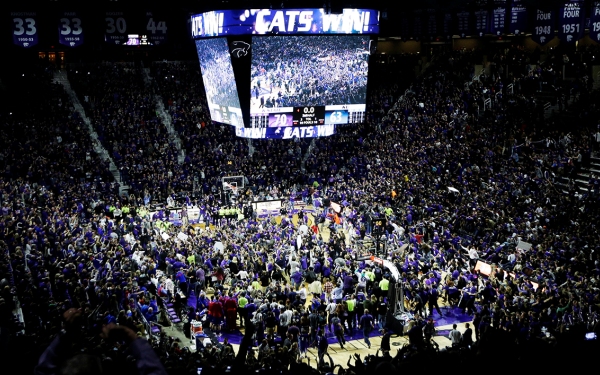 At the time, Fran Dunphy could feel the wave coming, and only in retrospect did he see a way to keep it from crashing upon him and those Kansas coaches and players along the sideline at the Wells Fargo Center.

This was Dec. 22. Dunphy took a timeout with Temple leading the No. 10-ranked Jayhawks by 27 points and with 50 seconds left in regulation, the Owls’ 77-52 victory a formality. Already, the Temple players were lining up near the scorer’s table, juiced and ready to celebrate their upset, and already Temple fans and students were nearing the court, preparing to storm it at the sound of the final buzzer.

“What are you supposed to do?” Dunphy said Wednesday. “They earned that right to celebrate, but you don’t want to see the Kansas kids get hurt.”

Looking back later on that moment, Dunphy realized what he could have done: He could have gotten Kansas coach Bill Self’s attention during that timeout and told him, “Hey, you and I can shake hands in the tunnel. Just make sure you and your players are safe. But that’s the benefit of hindsight, and of a game that turned out to be a rout. So those Temple players and students flooded the floor in a mere prelude to what happened Tuesday night at Bramlage Coliseum in Manhattan, Kan.

This time, Kansas State knocked off Kansas, 70-63, and so many students rushed the court and created such chaos that one of them was cited for disorderly conduct for slamming into Jayhawks forward Jamari Traylor as if the fan were a free safety and Traylor a wide receiver daring to cross the middle of a football field. One of Self’s assistants put another fan in a headlock for the sake of protecting another Kansas player. Afterward Self told reporters, “This has got to stop,” and he was right to bemoan a situation that quickly grew scary and dangerous and out of anyone’s control.

Kansas State’s athletic director has since apologized for the failure of the university’s security team to protect KU’s players and coaches and to keep the fans off the court. And Bob Bowlsby, the commissioner of the Big 12, released a statement admonishing K-State for its inability to keep the game’s participants and spectators safe. But Kansas State could have done everything right, and its security force still might have been overwhelmed by the sheer number of people pouring out of the stands. So the core question here, the one Dunphy asked, still stands: What are schools supposed to do? What’s the solution here? Does a solution even exist?

The easiest answer, of course, is to have the NCAA or a conference “ban” court-storming, because banning something is always the default suggestion in these sorts of situations, and often the least effective. The more rules and regulations you impose, the more opportunities to exploit them develop, and the harder those rules and regulations become to enforce.

One hypothetical example: If you tie a game’s outcome to the behavior of the home team’s fans — take one step on the floor, and your team forfeits — you only encourage fans to influence the game’s outcome. You take a spontaneous reaction and turn it into a possible tactic: “If my friends and I are fans of the visiting team, and the visiting team is losing, why wouldn’t we just rush the floor late in the game and force the home team to forfeit? It sounds silly and contrived, and it would have been in an earlier time — before ubiquitous iPhone cameras, before social media and memes, before making a public spectacle of oneself became an American rite of passage.

What, then? Should a university and its facilities management team line the court with security officers, similar to the tack the Phillies took during the 1980 World Series, with those cops and K-9 dogs a visible presence around Veterans Stadium? How can a school stop students from rushing the court without opening itself up to accusations of excessive force and to the litigation that would inevitably follow? What parameters and punishments would actually curtain such behavior? Is there anything, beyond offering warnings and planning exit strategies and presenting a strong-yet-reasonable show of security, that would eliminate the risk of another Kansas-Kansas State incident without potentially making the problem worse?

“I don’t know how you ban it because it’s sort of a natural human reaction,” said Villanova athletic director Vince Nicastro, who added that Villanova has end-of-game procedures, both at the Pavilion and at the Wells Fargo Center, that its facility and security personnel rehearse and review frequently. “The key is, if you can’t stem the tide — and sometimes, you just can’t — how do you make sure the teams, the officials, and others are protected and moved off the court?

“Can you manage it? Can you figure out how to make it safer for people? Can you discourage it? Yes.”

It might be the only solution, limited as it is. You do everything you can before and once the wave comes, and when it does, you hold on and hope for the best.