Captivity may cause stress for polar bears, but Arctic also poses problems 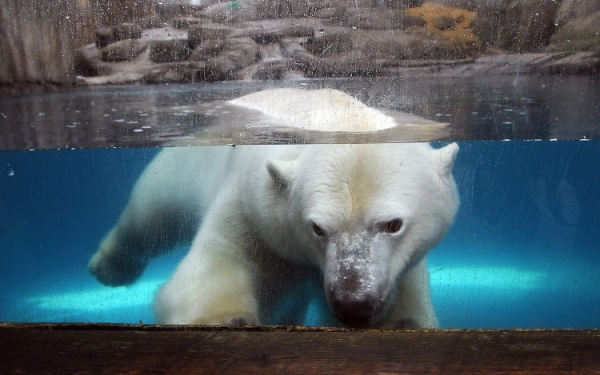 PITTSBURGH — Koda, the 10-year-old male polar bear at the Pittsburgh Zoo & PPG Aquarium, emerges from a cubbyhole atop the 6,000-square-foot enclosure he shares with 14-year-old Kobe. He steps out to a nearby ledge, his head bobbing and swinging from side to side. He then backs into the cubbyhole, head still weaving, only to return a moment later. He repeats the display, again and again — a 930-pound predator responding to an unheard audience’s call for encores.

Such scenes play out in zoos nationwide. By one estimate, 85 percent of polar bears in North American zoos engage in what’s called “stereotypic behavior” — actions that are repetitive and apparently purposeless. And while the bears in zoos are closely looked after, critics say the behavior can arise from captivity itself.

Such a display is “a signpost of frustration,” said Laurel Braitman, a zoo critic and author of “Animal Madness,” a 2014 book about the inner lives of animals. “A polar bear isn’t usually doing a compulsive stereotypical dance in the wild.”

But it’s increasingly hard for bears to act naturally even in nature. One widely cited reason for stereotypic behavior is that in the Arctic, polar bears typically roam hundreds or even thousands of miles. Yet thanks to global climate change, the ice they tread is shrinking.

Polar bears “are losing their habitat,” said Donald Moore, a senior scientist at the Association of Zoos and Aquariums. Zoos can and do “serve them well,” and “it’s really important to have animals as ambassadors for their relatives in the wild.”

Which leaves polar bears poised on a kind of ledge, needing our attention and sometimes, perhaps, backing away.

“I think there’s very little question about whether bears suffer in captivity,” said Rob Laidlaw, the executive director of animal rights group Zoocheck Canada. “There is a growing body of literature that says animals can be upset just by people looking at them.”

Among Laidlaw’s chief objections is that polar bears “have evolved to live in these massive environments.” Polar bears can travel 60 miles in a day, he said, while even extensive zoo exhibits measure less than an acre. “It is doubtful that an enclosure could be constructed (especially in an urban setting) that would (avoid) the development of aberrant behaviors,” he wrote in 2005.

Others share that fear. In 2003, Oxford University researchers argued “the keeping of naturally wide-ranging carnivores should be either fundamentally improved or phased out.”

Pittsburgh’s zoo didn’t have polar bears then: Given such concerns, an official told the Pittsburgh Post-Gazette at the time, “we won’t have them unless we have a suitable exhibit.”

Three years later, the zoo opened its $12.5 million Water’s Edge exhibit. It has features that Laidlaw said are important: For example, it allows bears to move to a back area out of public view when they wish.

As at other zoos, Pittsburgh’s bears are also given a rotating schedule of “enrichment” activities up to eight times a day. On a recent morning when the zoo was closed to the public due to cold, the bears were in their element: crushing plastic barrels and puzzling over containers from which they extracted iced-up mixtures of fish and lard.

Zoo officials acknowledge that both polar bears sometimes exhibit repetitive behavior, Koda especially. “But it’s hard to get at the heart of what it means,” said Joseph Gaspard, the zoo’s director of science and conservation.

“The word ‘stress’ gets paired up with stereotypic behavior,” Gaspard said. But some humans pace too, he noted. Is the behavior “just kind of a release of energy? It may be hormonal, because it comes up in certain times of year” when bears typically breed.

“If we could see the complete picture with these guys,” he added, “we wouldn’t be doing animal science.”

Gaspard said enrichment activities — under the supervision of the assistant curator of aquatic life — Paul Moylett, have reduced stereotypic behavior.

Moore, of the zoo association, agreed that “when we give the appropriate enrichment and mental stimulation, and really work on the human-animal relationship, I believe they are happy bears.”

“I know people who’d be comfortable living in a luxury hotel where every need was taken care of,” Braitman, the zoo critic, countered. “But I wouldn’t be happy in a 5-star hotel if I wasn’t allowed to leave.”

Things could be worse for bears. And in the wild, they probably will be.

At least 20,000 polar bears are estimated to live in the Arctic. By contrast, according to the World Wildlife Fund, there are fewer than 4,000 tigers in the wild. But while the threat to polar bears is less immediate, it may be harder to address.

“The traditional model of conservation is you identify a species under threat because of overhunting or deforestation and then you build a fence around the habitat and go home,” said Steven C. Amstrup, chief scientist for advocacy group Polar Bears International. But “you can’t build a fence to protect (bears) from climate change.”

Polar bears live much of the year on the Arctic ice, where they hunt seals and breed. But as global temperatures warm, it takes longer for the ice to form. The bears remain trapped on land, surviving on dwindling reserves of fat. The result: weaker bears with sicklier offspring.

Given current trends, Amstrup estimates, polar bear populations could vanish from the wild by 2100. (Others predict that some bears will survive in remote areas.)

But bears are what conservationists call “charismatic megafauna”: big animals people relate to. In the mid-2000s, efforts to have the bear placed on the endangered species list drew the most public support in the list’s history.

“If people can get inspired by going to a zoo,” Amstrup said, “that bear can be an effective ambassador for its cousins in the wild.”

As evidence, the zoo association cites a 2007 survey of 5,500 zoo and aquarium visitors. More than half said their visits prompted them to “reconsider their role in environmental problems … and to see themselves as part of the solution.”

That’s the spirit of International Polar Bear Day, an annual effort by Polar Bears International marked every Feb. 27 to stress how human activity can determine the fate of polar bears. Along with giving its bears a “special ice treat,” Pittsburgh’s zoo will urge visitors to recycle and use energy-efficient light bulbs, among other actions.

Amstrup said that while those steps are important, “getting this done to the necessary scale requires government action” to limit carbon emissions that cause warming.

“The more people who have opportunity to see polar bears and understand their plight,” he argued in a 2012 essay, “the more likely we are to alter our warming path in time to save them.”

Laidlaw, the animal rights activist, said there was no evidence showing that zoos inspired broad-based political activity or other action. “People go to zoos for a good time,” he said. “They don’t go to hear about gloom-and-doom scenarios.”

On a personal level, zoos can have an impact. Jon Mooallem, whose 2013 book “Wild Ones” discusses polar bear conservation at length, said zoos provided a “foundational experience” for conservationists he knew. And he credited zoos for “trying really hard to reinvent themselves.”

Still, he said, it bothered him that “we see these stereotypic behaviors and not know what they mean. Or we think they are cute.”

When he saw bears in the Arctic, he added, “The most poignant moment was when the bear walked away, and you saw how much space was in front of it. You can’t get that in a zoo.”