Merchants of Doubt: An interview with director Robert Kenner 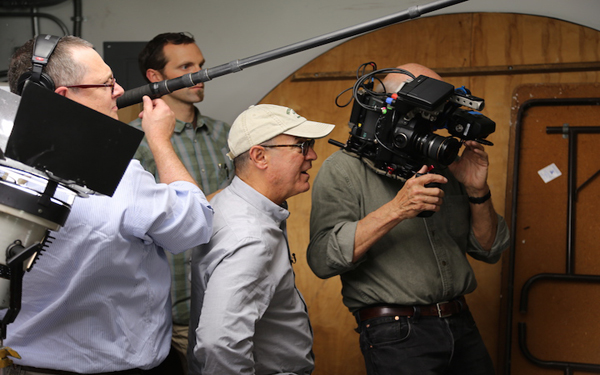 Robert Kenner on the set of Merchants of Doubt.

In 2008, when he made the groundbreaking documentary Food Inc., which aimed to expose the distasteful truths of the food industry, director Robert Kenner discovered that the chain of corruption and distorted information that he unearthed actually applies, and terrifyingly so, to vast arrays of other industries that control much of our day to day lives. So, Kenner felt it necessary to continue following the cookie crumbs in his next doc Merchants of Doubt to reveal the disheartening fact that corporations and their representatives don’t just control what we eat, but what we breathe, what we medicate ourselves with, and how we inhabit the earth in general.

And how do they do it? With a little something called deception. On the surface that may seem too simple, because that’s exactly what it is. Simply by causing confusion amongst the citizens of this and other nations, these industries can quell regulations to meet their own means.

Kenner uses the tobacco industry as a springboard, showing how public relation firms were able to silence the definitive science behind the dangers of smoking cigarettes for over 50 years. Science and facts didn’t and still do not matter to the big wig corps, as long as they can constantly question them in the public eye to instill nationwide doubt, biding time to create permanent legislation that caters to their interests.

With Merchants of Doubt, Kenner isn’t there to yell at the corporations and the individuals who prolong these debates on issues like climate change and pharmaceuticals that no longer have any merit. Instead, he seeks to highlight the absurdities of the uncanny power of those who manage to dictate the issues that are most important to our livelihoods. As Kenner exhibits through interviews with those playing on both sides of the line of truth, they are magicians and true masters of deceit.

Kenner recalls, “There’s one man in our film who is really just brilliant, Peter Sparber, who when there was going to be legislation to create a fire-safe cigarette to stop house fires, was able to go out and say ‘No, it’s not cigarettes, it’s the couches that cause fires.’ That’s an act of genius right there. He was able to make it a law that we had to put chemicals in these couches that would supposedly prevent fires, but they don’t prevent fires; they cause cancer, and then it became a law so we had to have them. So they wanted regulation, but it was a perverse regulation that helped their product. It’s insane.”

Sparber is a former lobbyist for the tobacco industry, who was able to seamlessly shift the public’s focus from the cigarette to furniture. How? By creating a network of people and businesses to oppose fire-safe cigarettes—people and businesses that the general public might deem trustworthy in the matter, like firefighters and doctors. And what about the scientists, who actually know the facts? Well, PR firms hired people to simply say they are scientists when they are, in fact, not at all. Indeed, when Kenner asked Sparber to be in Merchants, Sparber’s response was shockingly glib.

“I told him I wanted him to be in the film and he said ‘You can take [climate scientist] Jim Hansen and I can take a garbage man and I could make America believe that the garbage man knows more about science than Jim Hansen.’ And I told him that’s exactly why I want him in my movie,” says Kenner.

While we might like to think we’d know the difference between a garbage man and a NASA scientist like Hansen in talking about something like climate change, it’s the pairing of mastery fraudulence with the media’s willingness to allow pundits to continue null debates that negates the true scientists and their work, ultimately fooling the public into questioning the data.

“If we’re trying to do something with this film it’s to say that media should know better. They should not be putting on that guy James Taylor [of The Heartland Institute] who said ‘I’ve taken science classes in college, and that makes me reputable.’ He’s up against people with their doctorate and he is there to just create confusion and doubt. He’s being called an adjunct professor. They’re fancy words, but they mean nothing, and how is someone who is watching that supposed to know? And then he says that if you believe in climate change you’re like the Unabomber.”

All the absurdity is bizarrely entertaining, but Kenner’s film also comes embedded with a strong sense of urgency, because the issues these corporations are controlling are ones that directly affect the quality of our lives. Even the politicians who wield legislative power are often in gridlock, because despite knowing the truth, speaking it could mean their career.

“Climate change is just the last big payday in that world of deception. I think that these congress people know that this is true, but they just don’t want to be voted out of office. At the moment they’ll go with the paychecks, but if they’re constituency starts to change, these people will change. I’m optimistic because if you look at gay rights, think how quickly the world has changed, or look at marijuana laws. These things were unthinkable six years ago. I do think people are coming around pretty quickly.”

Perhaps like Al Gore’s An Inconvenient Truth (2006), Kenner’s Merchants of Doubt may start out by preaching to the choir and further alienating skeptics, but with his optimism concerning the changing of tides as well as the increasing power of documentary filmmaking, which he considers to be the new path of journalism, he might just be giving our world a chance to become certain of our present and future by taking control of what we know, and leaving all doubts behind us.

Merchants of Doubt opens at The Landmark in L.A. and at The Angelika and Lincoln Plaza Cinemas in New York on Friday, March 6th. Coming soon to a theater near you!
Buy Tickets