Gang of Four's latest What Happens Next? 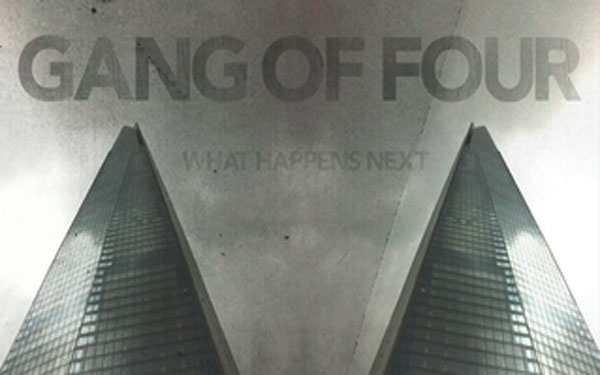 The title of this album is a little amusing if you consider that guitarist Andy Gill, the lone remaining original member of Gang of Four, must have asked himself “what happens next” hundreds of times over the course of the band’s nearly four decades-long and infinitely frustrating career.

Gang of Four achieved critical success from the get-go and their 1979 debut Entertainment! is still referenced today as one of the gems of the early post-punk era. But the band has never achieved commercial success; they’ve troubled the charts only once, more than 30-years ago with the New Wave-y “I Love a Man in a Uniform.” Having suffered myriad line-up and stylistic changes over the years, Go4 has earned a reputation for missing the mark as often as they hit it. This time though the results are good.

The album kicks off with “Where the Nightingale Sings,” lyrically an indictment of racial inequality aimed at the band’s U.K. homeland and including the Go4 typically militant drumbeat, but with its dreamy melody and smooth vocals from John “Gaoler” Sterry, the song brings Roxy Music or Bryan Ferry to mind. Alison Mosshart of the Kills shares lead vocal duties with Sterry on “Broken Talk,” a funky Bowie-esque groove laced with lysergic guitar that’s geared to the dance floor and “England’s in My Bones,” also with Mosshart, has a similar vibe and is another of the album’s stand-outs. “Isle of Dogs” is perhaps the closest to the band’s very early sound to be found here and the Gary Numan-like “Dead Souls” featuring guest guitarist Hotei is the furthest from it.

Intriguing throughout, fans new and old will likely welcome this latest offering from Gang of Four, and the next time they or Mr. Gill wonder what happens next for the band it can be with a big smile firmly in place.

What Happens Next is available now via Metropolis Records.