Designer Tom Ford is so Hollywood, and his brand is starring worldwide 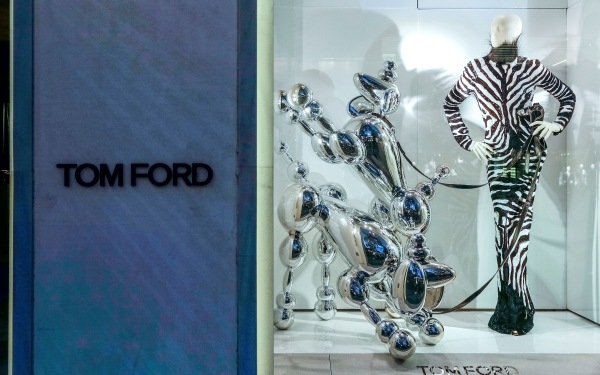 In a departure from showing during London Fashion Week, Ford brought his fall 2015 women’s runway show to L.A. amid Oscar fever.

He insisted it was just a matter of scheduling and not a branding move Whether it’s a one-season phenomenon or the beginning of a new tradition depends on the response to the show, he says. But it’s not altogether surprising that he would be giving L.A. a try. After all, no designer is more Hollywood than Tom Ford.

He has wardrobed Daniel Craig as James Bond; dressed a constellation of stars, including Justin Timberlake, Gwyneth Paltrow and Julianne Moore, for stage and red carpets; and been the subject of a Jay Z song. He even directed an Oscar-nominated film, “A Single Man,” starring Colin Firth, in 2009, which he plans to follow with a soon-to-be-announced second movie project.

For the last few years, Ford, 53, has spent less time in his Richard Neutra-designed house in Bel-Air, and more time in London, where he’s been showing his men’s and women’s runway collections as part of London Fashion Week, and where he and spouse Richard Buckley are raising their son, Alexander (Jack), 2 ½, who’s saying his first words with an English accent.

While Ford’s menswear is deeply rooted in Savile Row tradition, one could argue that his flashy womenswear, with its myriad cinematic and pop-culture references, is more at home here. “Even when I’m not in L.A., it’s part of my history, my background and my visual vocabulary,” he says. “But I showed the same collection I would have shown in London.”

It’s been 11 years since Ford started his own brand, first launching a lucrative cosmetics and fragrance business with Estee Lauder in 2004, followed by menswear in 2006 and women’s in 2010. And it’s been what feels like a lifetime since he left Gucci, where he defined the look of luxury in the 1990s as creative director of both the Gucci and Yves Saint Laurent brands and created the modern-day archetype of the designer-businessman.

For the record, those rumors that he was returning to Gucci following Frida Giannini’s abrupt departure recently were “totally unfounded,” he says. “I laughed so hard. Everything I read was really complimentary of that chapter in my life, which made me feel good. But I am totally separated from that.... My business is going really well and I’m starting to feel established.”

Ford’s clothes are expensive even by Rodeo Drive standards — you only have to take a look at the $98,000 boho, lace-up crocodile dress under a glass case in the Beverly Hills store to know that. But so far, that hasn’t stalled growth. The designer, whose brand is privately funded, plans to have 132 stores worldwide by the end of 2015, with new openings in Houston, Miami and Atlanta in the next 18 months.

But the men’s business outpaces the women’s, which is “still refining its focus,” according to New York-based retail analyst Robert Burke. While Ford has developed some womenswear signatures — including a sexy-just-this-side-of-raunchy aesthetic and chunky zippers and padlocks as a design motif on shoes and bags — he seems tentative about making reference to his own best work at Yves Saint Laurent and Gucci in the 1990s.

After Ford left Gucci, he said he would never show again. He didn’t want to worry about impressing the fashion press; he just wanted to make beautiful, ultra-luxe clothes. That didn’t last long, and soon Ford was back on the runway, the first time in New York in 2010, and after that in London. He swore he’d never design tennis shoes, but they’ve since become a bestseller (in leather, velvet and croc). He promised he’d never allow camera-phone photos inside his shows, and that went out the window at the men’s show in London in January, when he set up a professional set in his showroom for journalists to get good Instagram shots.

“That’s what fashion is about, it’s all change,” he says and laughs.

The L.A. show could signal yet another evolution, and perhaps a refinement of his vision and customer target. The show was notable in that it wasn’t for press or buyers. Many, like Ken Downing of Neiman Marcus, were unable to make the trip to L.A. because they were going to be en route to Europe. “I really hope he goes back to showing in London,” Downing says.

Instead, the show was for Ford’s celebrity and socialite friends — in other words, the people who might actually buy a $6,800 tuxedo jacket, $980 ankle-zip white jeans or a $6,250 powder-pink, fringed leather jacket. In that respect, Ford follows a luxury industry trend of bringing the show to the customer, which was started by globe-trotting Chanel. Ford is also riding a wave of buzz around Los Angeles, where Dior plans to stage its cruise show in May.

For a designer or brand, a change of scenery can be a good thing, as can a change in audience.

“A fashion editor looks at a piece of clothing thinking, ‘Will this inspire that story I’m about to do, how’s it going to look on a page, and is the editor in chief of the magazine going to like it?’” Ford says. “This audience is looking and thinking, ‘Do I want to wear that?’ That’s different.”

By having his show in L.A. on Oscar weekend with an all-star crowd, Ford made a stronger connection in consumers’ minds between his ready-to-wear and red carpet clothes. On the Monday after the Grammys, a mannequin front and center in his Beverly Hills store was clad in the same beaded and fringed, plunge front dress Nicki Minaj wore on the red carpet the night before, only in an electric purple hue as opposed to the black version worn by the superstar. Ford likes to bellyache about the red carpet, and how the clothes are “stuck in the 1950s,” but he’s awfully good at making them.

It was actually one of those rejections that inspired the spring 2015 collection in stores now, at least in part. Last June, when Ford was honored with American fashion’s highest accolade, the Council of Fashion Designers of America’s Lifetime Achievement Award, he designed several things specifically for Rihanna to wear that evening, which she rejected in favor of the Adam Selman-designed, nearly naked crystal fishnet dress that caused a worldwide collective jaw drop. “She was right,” Ford wrote in a blog post on his website. “She looked more beautiful than I have ever seen her.”

That fearless fashion sense embraced by Rihanna and Miley Cyrus was among the inspirations for Ford’s slick evening suits with flared pants, skirts short enough for a thigh-high stocking to peek out, and risque gowns with little more than pasties or strips of fabric to cover the breasts. (Other inspirations: Greta Garbo’s Adrian-designed costumes in the 1931 film “Mata Hari,” Ursula Andress’ breasts from the opening sequence of the 1965 film “The 10th Victim,” and the seductive photographs of Carlo Mollino — see what I mean about cinematic?)

In London in October, after the spring collection debuted on the runway, fashion critics called the pasties “silly” and “ridiculous.” Ford says he meant no disrespect. “I’ve always been an equal-opportunity objectifier,” he says. (It’s true; while he was designing Yves Saint Laurent, he featured full-frontal male nudity in a fragrance advertisement long before Rick Owens let it all hang out on his fall 2015 menswear runway earlier this year.)

“Fashion is its most powerful when it is a reaction to what is happening culturally,” he says. “Think about pant suits in the late ’60s and early ’70s as reacting to feminism by saying, ‘Hey, look, we can wear pants, too.’ And now think about what fashion today says, which is, ‘Hey, we are equal and comfortable and can choose to express ourselves by wearing jeans, or something that shows off our body more. We are not defined by our clothing.’”

Ford got his revenge on the pasties naysayers in L.A. in November, when Rihanna and Miley Cyrus were photographed rocking the barely there dresses they had inspired, the night he was honored at the amfAR Inspiration Gala.

They created a media sensation 100 times more powerful than anything on a runway. Which raises the question about showing in L.A.: What took him so long?