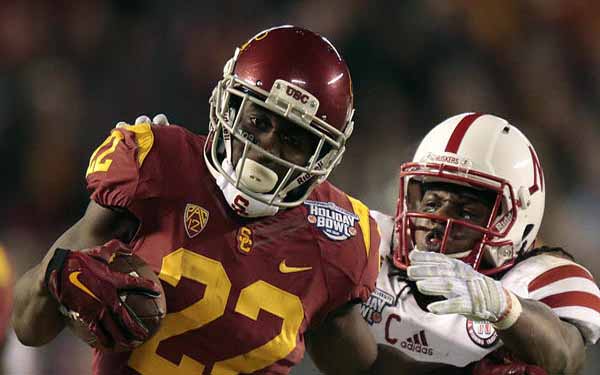 USC tailback Justin Davis, seen here in the Holiday Bowl against Nebraska, will get the majority of the carries during USC's spring practices with Tre Madden still not a full participant.
(Credit: Robert Gauthier / Los Angeles Times)

USC got off to a blistering start last spring.

New Coach Steve Sarkisian implemented his system of offense and the Trojans ran about 120 plays on the first day, a pace they maintained through most of their 15 workouts.

When USC opens spring practice Tuesday, the Trojans again will push the pace but also extend the learning curve.

"We get to build up on our schemes," Sarkisian said, "and focus on the fundamentals and details."

The question is whether the Trojans will maintain that speedy pace throughout the 2015 season.

Last season, USC opened against Fresno State at full throttle and got noticeably slower as the season progressed. The Trojans remained no-huddle but mostly appeared to be in no hurry to snap the ball.

USC's improved depth, courtesy of the end of NCAA sanctions, will not be evident until summer training camp. That is when the majority of the Trojans' first full recruiting class in four years will populate Brian Kennedy-Howard Jones Field, which is undergoing a spring makeover.

The Trojans begin spring practice three months removed from their Holiday Bowl victory over Nebraska and a 9-4 season.

Expectations will be greater in 2015. Quarterback Cody Kessler is coming off a record-setting season and will almost certainly be included in preseason Heisman Trophy discussion.

Several projected starters will not participate in spring practice or will be limited because they are recovering from injuries or surgeries.

Five players who enrolled in January, including quarterback Ricky Town, will have the opportunity for a head start.

Here are some questions facing the Trojans:

Can Kessler be kept out of harm's way?

A major injury suffered by Kessler could erase USC's chances of winning a conference title for the first time since 2008.

Kessler passed for 39 touchdowns with only five interceptions last season, but Sarkisian said there was room for improvement. So Kessler will get plenty of spring snaps.

Third-year sophomore Max Browne, in his third spring practice, is the leader to be Kessler's backup. But redshirt sophomore Jalen Greene could push for an opportunity if he has significantly improved since fall.

Madden, who rushed for more than 100 yards in four of the first five games in 2013, sat out last season because of a toe injury.

He is not expected to participate in contact drills. That leaves junior Justin Davis as the only scholarship tailback for spring practice, so walk-on James Toland and fullbacks Jahleel Pinner and Soma Vainuku will take carries.

Which receiver is poised to make an impression?

The departures of Agholor and Farmer created opportunities, and junior college transfer Isaac Whitney has a chance to establish himself.

Who is new on the offensive line?

Fortunately for the Trojans, he inherits a group that has returning starters at every spot.

Left tackle Chad Wheeler, who had knee surgery in November, will not participate in spring drills. Freshmen Chuma Edoga and Roy Hemsley enrolled in January and will add depth to what in the fall will be the Trojans' deepest position group.

How do the Trojans replace Leonard Williams?

Williams is projected as a top-five NFL draft pick, so it's too much to ask one player to fill the void.

Senior nose tackle Antwaun Woods, who had pectoral surgery in December, will be sidelined for spring practice. Third-year sophomore Kenny Bigelow, who sat out last season while recovering from knee surgery, will not participate in contact drills.

Who are the leaders among the linebackers?

Freshman Cameron Smith gets a head start before Osa Masina, Porter Gustin and John Houston arrive in the summer.

Will the secondary be improved?

Sarkisian said the secondary is one of the main projects of the spring.

Jackson is established and senior cornerback Kevon Seymour is the elder in a group that will be bolstered in the fall by the arrival of several freshmen that could push for immediate playing time.

Matt Boermeester and walk-on Alex Wood will compete for the job through spring and summer.