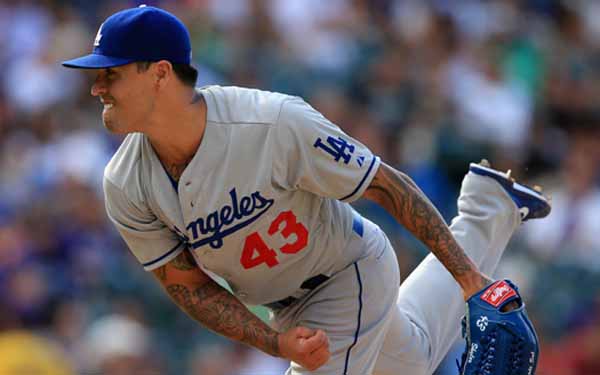 GLENDALE, Ariz. - To hear Dodgers pitcher Brandon League tell it, shedding 20 pounds and giving up alcohol were just a means to the end.

The fact that the Dodgers are encouraging players to eat organic food in spring training, and League has been on a paleo diet for months? Pure coincidence.

The only purpose for the change in lifestyle, he says, was to have more energy.

It began in August 2014, a time in the baseball calendar when the season starts to wear on a pitcher’s body. League was 31 years old, no longer a rookie. He noticed he wasn’t bouncing back well the days after he pitched – not well enough, at least – which can be a crippling problem for a relief pitcher.

“I was getting enough sleep, eating as well as possible,” League said. “The only other factor I saw was alcohol.”

League insists he didn’t have a drinking problem. He wasn’t staying out all night. It’s just that sometimes one glass of wine would turn into two, and even that can add up over the course of a 162-game season.

“I was enjoying myself more than I should’ve been,” he said.

So League stopped cold turkey. He said Saturday that he hasn’t had a drop of alcohol since August of last year. By September, his energy had returned. The results followed. League didn’t allow an earned run over his final nine regular-season appearances.

In October, League appeared in all four National League Division Series games against the Cardinals with only one day off in between Games 2 and 3. Part of that was out of necessity, since the Dodgers had few reliable relievers, but League responded to the challenge. He inherited three runners and none scored. Of the seven batters League faced only two reached base, via a single and a walk, and neither of them scored either.

It was the first playoff series of League’s 11-year career.

Rather than simply continue what he’d started, League decided to double down in the offseason. He stopped regularly eating out at restaurants and switched to a Paleo diet at the suggestion of Dodgers strength and conditioning coach Brandon McDaniel.

According to thepaleodiet.com, meals are designed “upon everyday modern foods that mimic the food groups of our pre-agricultural, hunter-gatherer ancestors.” Meat and non-starchy fruits and vegetables are encouraged; other forms of carbohydrates, particularly whole grains, are discouraged.

League, who was previously listed at 6-foot-2 and 215 pounds, didn’t really need to lose weight coming into this season. He lost 20 pounds anyway.

“I feel great,” he said. “It’s a huge step. It’s a big lifestyle change. Who doesn’t like a couple glasses of wine, great tasting food at restaurants?”

Prospect Julio Urias threw approximately 40 pitches to live hitters Sunday, the first time he’s faced his teammates in major league camp. The 18-year-old left-hander struck out four batters: Alex Guerrero (twice), Chris Heisey and Joc Pederson. ... The Dodgers signed veteran middle reliever Mike Adams to a minor-league contract with an invitation to spring training. Adams, a 36-year-old right-hander, went 2-1 with a 2.89 ERA for the Phillies last season after missing most of the year with injuries to his right shoulder. ... Jimmy Rollins said he had a two-hour-long conversation to get to know teammate Yasiel Puig in the Dodgers clubhouse recently. “It was a good thing and I was happy I did it,” Rollins said. “I was going to do that anyway with a number of guys on the team but he just happened to be there by himself, with his cousin actually, who acted as the interpreter.”