Nimoy’s Spock was the master of cosmic cool 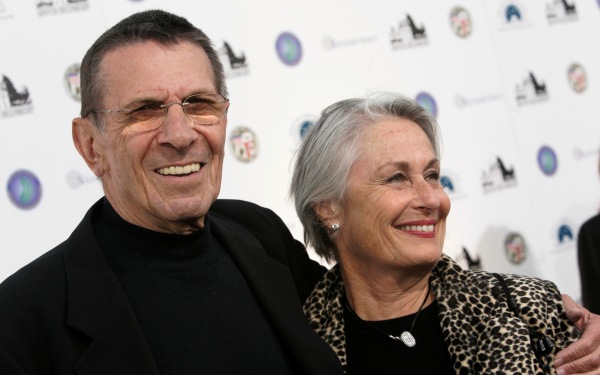 LOS ANGELES — It is important, and sometimes difficult, to remember that Leonard Nimoy, who died Friday at the age of 83, was an actor, not an alien.

As Mr. Spock, the elf-eared, half-Vulcan science officer and first mate of the Starship Enterprise, he created a role that turned him from a journeyman into a star. The role made a footnote of everything he’d done before and colored everything that came after.

The titles of Nimoy’s two memoirs — “I Am Not Spock” (1977) and “I Am Spock” (1995) — indicate a process of rejection and acceptance the part played in his life. And each is true: He was all the while his own person — it’s interesting, even a little arresting, to watch him in “Star Trek” outtakes, smiling widely, cracking jokes — and yet there is no Spock without him. He is made from Nimoy’s own body and voice, his sense of timing and his sense of play.

Nimoy was 35 and had been a working screen actor for 15 years when “Star Trek” premiered in 1966. In series including “The Untouchables,” “Wagon Train,” “Perry Mason,” “Combat!,” “The Man from U.N.C.L.E.” and “Get Smart,” he played all kinds of parts, good guys and bad ones.

His almond eyes, long face and prominent cheekbones made him exotic, even without the prosthetic ears. He was cast as Native American, Mexican, Eastern European. (His parents were Jews from what is now Ukraine.)

Why do we love Spock?

For all his outward evenness, he’s the most complicated character in “Star Trek” and its most modern hero. Today we might say he’s on the spectrum.

In fact, we do: A Google search combining “Spock” and “Asperger’s” returns 40,900 hits. He is the TV godfather of Jim Parsons’ Sheldon on “The Big Bang Theory” — to which Nimoy once contributed a cameo as the voice of a Spock action figure — and Tony Shalhoub’s Adrian Monk, and, in the “Star Trek” canon, Brent Spiner’s Data, who was an android.

He speaks more slowly and evenly than his wholly human shipmates. He’s smooth-surfaced, frictionless, calm and collected except when some alien spore or hormonal eruption gets a hold on him.

That Spock didn’t get jokes, let alone tell them, was a running joke on “Star Trek,” though he had a gift for irony and was — that is to say, Nimoy was — a master of the arched eyebrow and the dryly comic take.

Where co-star William Shatner — the fire to his ice, the heart to his head, the McCartney to his Lennon — slouches in his captain’s chair as if he were at home with a remote in his hand, Spock keeps his shoulders square. He doesn’t hurry. He is cooler than we are, in an emotional sense, but also in the social sense: He is sexy cool, the epitome of the dynamic nerd, of hot capability.

As it turned out, Spock was a lifelong project. The five-year mission stretched to nearly half a century and incorporated cartoon series, to which Nimoy lent his voice, and six movies with the original cast, two of which Nimoy also directed.

We knew him in youth, and in old age. There have been many James Bonds but almost only one Spock. In the 2009 “Star Trek” theatrical reboot, and its 2013 sequel, where Zachary Quinto inherited the character, Nimoy played him as well. Indeed, that whole plot feels constructed expressly to get him on screen.

Aside from “Star Trek” projects, he worked fitfully throughout his later career, by choice, one assumes, though you never know. But Nimoy had other interests — he was a polymath or a dilettante, depending on what you make of his poetry, his photography, his music.

His recordings, including covers of “If I Were a Carpenter” and “Both Sides of Now” featuring the actor’s homely baritone, have improved with age, purveying as they do in a now-beloved brand late 1960s Hollywood gloss-pop, or perhaps with distance; they are, at any rate, better than Shatner’s “The Transformed Man.”

Genre success can be a kind of life sentence for an actor — consider the later careers of Boris Karloff, Vincent Price, Peter Lorre — and television, on which he might play a part weekly, for years, magnifies the association of player and part. But it’s also a gift: They keep a chair open for you, and when Nimoy came back to television for one last time, beginning in 2009, it was to a sci-fi show.

And, happily, it was a great one — Fox’s “Fringe.” As the recurring character William Bell, seen first in silhouette, announced by a graveled but familiar voice, Nimoy, his introduction there was a moment of pop-cultural perfection, a thrilling melding of past and present, fiction and fact.

Nimoy used just enough Spock-ish sangfroid to make it feel as if a circle were being closed, or a starship were docking back on Earth.