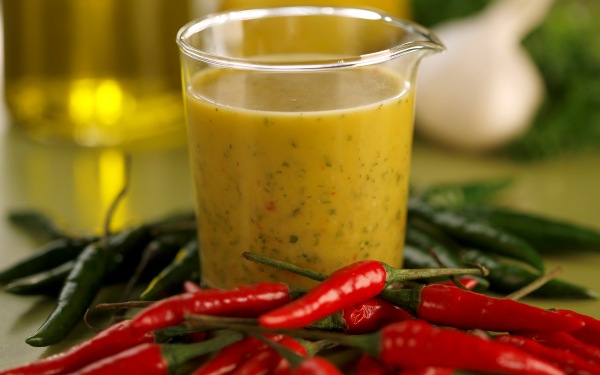 This piri piri from chef Marcus Samuelsson's "The Soul of a New Cousine" is made from chilies, lemon juice, garlic, oil and herbs. Use it to season shellfish, fish & chicken. Styled by Corrine Kozlak.
(Credit: Michael Tercha/Chicago Tribune/TNS)

Playing with fire in the kitchen is definitely dangerous. But it can also be delicious — if you learn to play with a few culinary heat makers.

It involves working with a variety of spicy, pungent or tart foods — from arugula and chilies to garlic, ginger, wasabi and Worcestershire sauce — that can spark a reaction in your mouth, throat and nose that may smolder, flame or tingle pleasantly.

Combining such foods in a dish and doing it well can be a challenge, though, for it goes beyond degrees Fahrenheit, Scoville scores and chest-thumping boasts.

“Here in America, we tend to want degrees of heat. It’s more of a macho I-can-eat-hotter-than-you, and it tends to overwhelm a lot of the other flavors in a dish,” says chef William Phillips at the Culinary Institute of America in Hyde Park, N.Y. “You don’t want to dominate the main item with heat or spices. You want to be able to taste all of the ingredients.

Chef and cookbook author Marcus Samuelsson might agree. “When people say they’re going to make spicy food, what they don’t understand is that it’s a song and dance,” he says. “It’s a balance.”

Phillips calls it “the rhythm of flavor.” And both chefs say it involves knowing how piquant foods affect your senses, complement other ingredients and can be layered to let all the elements shine.

Paul Wise knows exactly what those tart, spicy and pungent foods will do when you sniff them or they land in your mouth. Wise, an associate member at the Monell Chemical Senses Center in Philadelphia, says compounds in them will stimulate the nerve endings (receptors) in your mouth and throat, on your tongue and in your nose. Scientists call this sensation chemethesis. We like his term: “an electric prickle.”

Three of the most common players in food and beverages are: a cool receptor (think mint), a hot chili receptor, and “a kind of general irritant receptor” that can be sensitive to hot mustard, wasabi, horseradish and cinnamon, usually depending on the concentration.

“They’re some of the same nerve endings that give us sensitivity to heat and cold and pain,” says Wise. “And there are some overlapping sets of nerves that are involved.”

Even in the nose? “The nose tends to be pretty sensitive,” says Wise.

Phillips agrees: “Things like horseradish and wasabi are a very quick thrill as opposed to long misery.”

So how do you build a well-balanced fire?

Consider all elements in a dish. Chili pepper’s capsaicin and fresh ginger’s gingerol will both amp up the pungent power of a dish. Growing regions and seasons can produce variations in pungency. And don’t ignore ingredients in condiments; Sriracha’s sugar and garlic, for example, and the vinegar in many hot pepper sauces.

“People tend to throw all the Tabasco in at the end,” says Phillips, a CIA associate professor of culinary arts and unofficial chili pepper coach. “It’s incredibly acidic, so it can be used as a tool in getting the layers of flavor.”

But give it time with other ingredients in the cooking pot.

“Vinegar and lime will always help if a dish is muddy,” says Samuelsson. “If you want it to go from muddy to bright, vinegar will cut through that. Lime juice will do that too.”

Cooking can also tame some fire.

“Chilies will go from sharp to nutty to buttery,” says Samuelsson, who has restaurants across the U.S. and in Sweden. “That doesn’t happen when you just use it straight. That’s why I rarely use raw garlic or raw chili. That’s why you transform them.”

“Fat can generally coat things and smooth things out when it comes to that heat,” says Phillips, from dairy (such as yogurt or butter) to oil.

Toasting spices or sauteing ginger, garlic or onions in oil is “absolutely going to knock down the pungency,” he adds, noting that you can also diminish the heat of a chili pepper by removing its ribs and seeds.

“When you create a spicy food you also have to have an offsetter, and that could be rice, it could be cucumber,” says Samuelsson.

Should fire erupt in your mouth, Wise advises: “Pop an ice cube in there. It will really tamp it down fast.”

A few foods with piquant potential:

Adapted from chef Marcus Samuelsson’s “The Soul of a New Cuisine” (Wiley, $40) this sauce is used at the table to season shellfish, fish and chicken. Piri piri is the Swahili term for the hot chili and the national dish of Mozambique. Let mixture mellow slightly before tasting; the flavors will meld.

Combine chilies, lemon juice, cilantro, parsley and garlic in a blender; puree until smooth. With the blender running, add the oil in a slow, steady stream. Blend until well combined. Store in an airtight container in the refrigerator for up to 2 weeks.

Adapted from “The Soul of a New Cuisine.” The dish typically would be served with rice, but in this recipe each shrimp is wrapped in a lettuce leaf and served as an appetizer.

Toss shrimp with 1/2 cup piri piri in a large bowl. Refrigerate, 20 minutes. Heat olive oil in a large skillet over medium heat. Add shrimp; cook, turning once, until opaque throughout, 2 minutes per side. Transfer to a plate; sprinkle with salt. Squeeze lime quarters over shrimp. Spread 1/2 teaspoon of remaining piri piri on each lettuce leaf. Place a shrimp on each leaf; fold over bottom and sides to form a wrap. Serve immediately.

This recipe for quick Indian-style vegetables is adapted from Aarti Sequeira’s “Aarti Paarti: An American Kitchen with an Indian Soul,” (Grand Central Publishing, $28). Juldi means quickly. You can adjust the firepower by upping your favorite pungent items such as ginger or serrano chili.

1/4 to 1/2 medium serrano chili, seeded, sliced into thin half moons

Fill a large wok or skillet with 2 inches of water. Place a steamer basket inside, cover and heat to a boil. Put vegetables in the basket; sprinkle with a little salt. Cover; steam until vegetables are tender, 5 to 15 minutes, depending on the vegetable. Remove veggies from steamer basket; set on a plate to drain. Drain and wipe out wok.

Add oil to wok; heat over medium-high until it shimmers. Test heat’s readiness by dropping a couple of mustard seeds into the oil. If they sizzle immediately, oil is ready. Add mustard seeds; cover wok immediately as the seeds will begin to pop. When popping subsides and seeds turn gray, add cumin seeds. Stir a few seconds until you can smell them. Add ginger and chili, cooking until fragrant, about 20 seconds.

Add steamed vegetables, another pinch of salt, some black pepper and sugar. Cook for a few minutes, stirring often, until the vegetables begin to pick up a little color. Finish with a squeeze of lime and the cilantro.