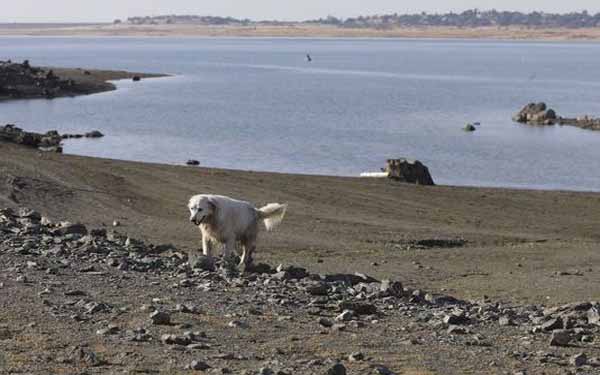 SAN JOSE, Calif. — Human-caused climate change is increasing drought risk in California — boosting the odds that the current crisis will become a fixture of the future, according to a major report Stanford scientists released Monday.

The new study looked at data — both backward and forward in time — to understand the influence of greenhouse gases on California’s past, present and future.

“What has happened in California has been a clear warming trend over the historical record … that probably would not have happened without humans,” said Stanford climate scientist Noah Diffenbaugh.

The continuation of this global warming “will result in more frequent occurrences of high temperatures and low precipitation that will lead to increased severe drought conditions,” said Diffenbaugh. The research is published in the March 2 issue of the journal Proceedings of the National Academy of Sciences.

The news comes on the eve of this winter’s third manual snow survey, taken atop the Sierra on Highway 50, and other readings, taken electronically, that reveal that statewide water content is just 19 percent of the historical average for the date.

Also adding to the drought’s growing threat, one weather agency is reporting that many San Francisco Bay Area cities have broken records for the warmest winter in history.

In our current drought, we’re experiencing the lowest calendar-year precipitation, the highest annual temperature and the most extreme drought indicators on record.

On Monday morning, the state Department of Water Resources said that it would increase this year’s State Water Project allocation to 20 percent, up from 15 percent last year, thanks to December and February storms. But that’s a far cry from full 100 percent — last achieved in 2006.

The Stanford team doesn’t offer specific recommendations, but says its findings could help California water managers and state officials plan for the future.

The team previously reported that the conditions behind the state’s current drought — a high pressure system parked over the Pacific Ocean, diverting storms away from California — are much more likely to occur in the presence of concentrations of greenhouse gases.

The new study goes further. Using a recently released trove of 120 years of historical data, they found more than a doubling of the frequency of drought years. There were six droughts in past 20 years (1995-2014), compared to 14 droughts in the previous 98 years (1896-1994.)

What’s happening? Imagine two coin flips, said Diffenbaugh, associate professor of Environmental Earth System Science at Stanford. Until recently, temperature and precipitation were uncoupled, occurring independently of each other. So each would come up either heads (warm) or tails (dry) half the time. Drought conditions — both heads and tails (warm and dry) — would be seen one-quarter of the time.

But climate change means that the coin is landing on tails — warm weather — most of the time. So even if precipitation stays constant, the combination of both warm and dry conditions is more common. Not only is there little rain, but there’s more melting of snow and increased water loss from soils and plants.

“Low precipitation isn’t enough to create a drought. The key difference is temperature,” said Diffenbaugh. And that’s what is changing.

The team doesn’t have data for the future, of course, and it’s impossible to run a real-world experiment. So they created climate simulations to peer into the future.

Their models show that the warming trend is likely to continue, boosting the odds that a heads-tails coin toss — co-occurring warm and dry years, creating drought — will climb in the coming decades.

Droughts have occurred throughout California’s pre-human history, just as the coin toss example would predict, they say. And nature creates its own variability, with volcanic eruptions and solar fluctuations.

But steadily rising temperatures — caused by burning fossil fuels and clearing forests — increases the probability of such conditions, they found.

“Continued global warming will result in more frequent occurrences of high temperatures and low precipitation,” said Diffenbaugh, “leading to more of the severe drought conditions that we’ve been experiencing.”