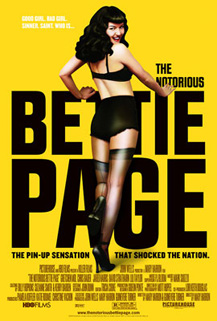 In The Notorious Bettie Page, which stars Gretchen Mol (Rules of Attraction and The Shape of Things) as the legendary 1950s pinup queen, the fascinating life of the beautiful actress – whose story is truly an accidental journey from girl-next-door to celebrity – is explored. The Los Angeles County Museum of Art (LACMA) is holding a special preview screening of the film on Tuesday, April 4 at 7:30 p.m. in its Leo S. Bing Theater. The screening will feature a special appearance by Mary Harron, the film’s director and co-writer.

In Notorious, Harron (I Shot Andy Warhol and American Psycho) tracks Page’s move from being a conservative, family oriented girl in Tennessee to a photo modeling sensation in New York City. Whilst she was beautiful and sexy in her own right, it was Page’s erotically inviting fetish poses that made her a sensation; as well as the target of a Senate investigation because, as they determined, her bondage poses were practically classifiable as pornography.

Notorious is also Harron’s way of fearlessly exploring the 50s, which, as depicted in the film, was a time when sex was a secret obsession among certain people that had the power to infuriate the government. Harron depicts Page and the period with grandeur, factoring in things like film noir, Super 8 home movies and Technicolor. The Connecticut-born Mol, who goes brunette to portray Page, captures the lens in every scene and turns in one of her best performances to date.

LACMA is located at 5905 Wilshire Blvd., in Los Angeles. Tickets for the screening are $9 for general audiences and $6 for AFI members and students with valid ID. For more information, or to purchase tickets, visit www.lacma.org.
Article posted on 3/29/2006
This article has been viewed 2445 times.