Conspiracies swirl over Moscow murder as no suspects named 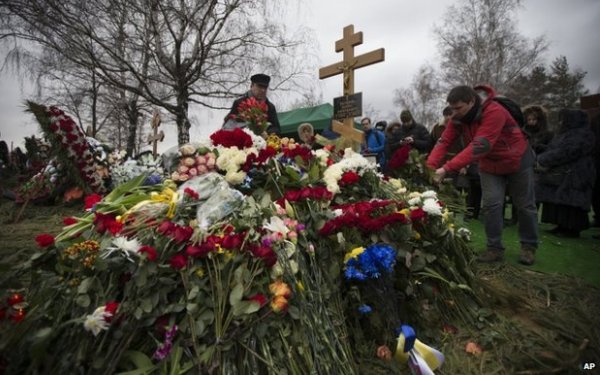 Nemtsov was buried in the same cemetery as murdered journalist Anna Politkovskaya in 2006.
(Credit: AP)

MOSCOW — The contract-style murder last Friday night of Boris Nemtsov, a vocal critic of Russian President Vladimir Putin, has led to accusations of Kremlin complicity but also to a slew of competing theories involving everything from the CIA to Islamic militants and Ukrainian nationalists.

Many of the 51,600 people who protested Nemtsov’s death at a rally on Sunday, according to the volunteer group White Counter, implicated the government in the murder. A political cartoon reproduced as a poster by some attendees showed a picture of the Kremlin bristling with security cameras that were in fact pistols.

But Putin supporters have been just as active in offering their theories.

“There is no doubt that Nemtsov’s murder was organized by Western secret services, attempting any way possible to create domestic conflict in Russia,” Ramzan Kadyrov, the Putin loyalist who runs Chechnya, said on his Instagram page.

He added: “Perhaps it was a Russian nationalist group. Or the Kiev fascists who could not hit another airliner and are desperate for help. I have no evidence — we really are all guessing. What is obvious — and for obvious reasons the Western press avoids stating the obvious — is that Mr Putin has absolutely nothing to do with it.”

Political killings in Russia lend themselves to such explanations because they are rarely solved and the organizers aren’t brought to justice even when the gunman is found, according to Mark Galeotti, a professor at New York University who specializes in Russian security affairs. Journalists Paul Klebnikov, Anna Politkovskaya and Vladislav Listyev were all killed in the past two decades and the cases remain unresolved.

Centuries of top-down rule have also led to a resigned sense that dark forces are at work that can’t be unmasked or controlled. From this perspective, public life is a kind of theater and ordinary people will never see backstage.

In some parts of Russian society, “everything is based on the position that nothing just happens, that it’s all PR,” Oleg Kashin, a Russian journalist who was beaten nearly to death in 2010, wrote on his blog Feb. 28. “If someone killed an enemy, of course it was a plot against those who were the enemy of the one who was killed. This collective habit that everyone is used to is the default first version — it’s a provocation, a conspiracy.”

The Russian authorities have yet to reveal any leads on Nemtsov’s killing, which took place within sight of the Kremlin on Feb. 27.

While numerous cameras are visible from the spot where Nemtsov was shot near the heavily guarded Kremlin, little video of the crime has emerged. Grainy footage from a security camera on the opposite side of the bridge, released by the TVC television channel, appears to show the killer escaping from the scene, though the moment of the attack is blocked by a snow-clearing vehicle alongside Nemtsov on the road, which is empty of snow.

A man named only as Sergey B. and described as the vehicle’s driver appeared with his face obscured in a video interview on the Russian LifeNews website on March 1, saying that he had been concentrating on his work and hadn’t seen the killer. He said he got out of his cabin after noticing a man on the ground, and when Nemtsov’s girlfriend Anna Duritskaya approached him, he advised her to call an ambulance before driving off.

Russia’s Investigative Committee said it’s looking at several possible motives, including whether Nemtsov was murdered to destabilize Russia or if Islamist extremists angry over his support for French satirical magazine Charlie Hebdo killed him.

“The true lunatics have fielded theories blaming the CIA because Nemtsov was not effective enough, or anti-government figures who wanted to jump-start the opposition with a martyr,” Galeotti said. “The world is usually much simpler than most people think.”

Russia’s Federal Guard Service said Monday that its cameras at the Kremlin didn’t record the killing, which took place away from their area of surveillance, RIA Novosti reported. No video is available of the shooting because cameras in the area weren’t working, Kommersant newspaper reported Monday, citing unidentified Interior Ministry officials.

The murder of Nemtsov, a deputy prime minister in the 1990s, makes him the most prominent former official killed in Russia. His funeral was held at Moscow’s Troekurovskoe cemetery on Tuesday.

Mikhail Gorbachev, the last leader of the Soviet Union, said the murder was intended to “provoke aggravation, and maybe even destabilization, of the situation in the country,” according to the Interfax news wire.

Russia’s opposition has blamed the government for creating an atmosphere that led to the slaying after anti-Putin activists were labeled “fifth columnists” on state television and at pro-Kremlin protests.

Opposition leaders “have to seriously think about what to do next,” Leonid Volkov, one of the organizers of Sunday’s march, said after the rally. “I think this is the beginning of a new wave” of protest, he said.

Nemtsov had been getting death threats and was working on a report about Putin and Russia’s involvement in Ukraine’s conflict, according to Ilya Yashin, another opposition leader. In 2011, he published a report that focused on how Putin’s friends and relatives benefited from the regime and on the perks he enjoyed as the head of an oil-rich state.

The shooting comes as the U.S. and the European Union are locked in the worst confrontation with Russia since the Cold War, over the conflict in eastern Ukraine. The U.S. and the EU imposed economic sanctions last year and accuse Russia of fomenting a separatist revolt in Ukraine, a charge Putin denies.

Some of the previously unsolved murders have been on many minds lately. On March 1, the country marked the 20th anniversary of the murder of Listyev, who headed the country’s largest television station at the time of his death.

Politkovskaya, a journalist who chronicled corruption under Putin and human-rights abuses during Russia’s conflict with separatists in Chechnya, was gunned down on Putin’s birthday in 2006, while Klebnikov, the U.S.-born editor of Forbes Magazine in Russia, was killed in 2004.

The Politkovskaya case was the only one to end in any convictions, with five men sentenced to jail time, a process that Amnesty International said didn’t identify those who ordered the killing and “left too many questions unanswered.”

“Both the state and the opposition in Russia are prone to conspiracy theories,” Galeotti said. “The official media paints a world shaped by dark forces while the anti-Putin opposition only need to look at how controlled the public sphere is for evidence of bad intentions.”