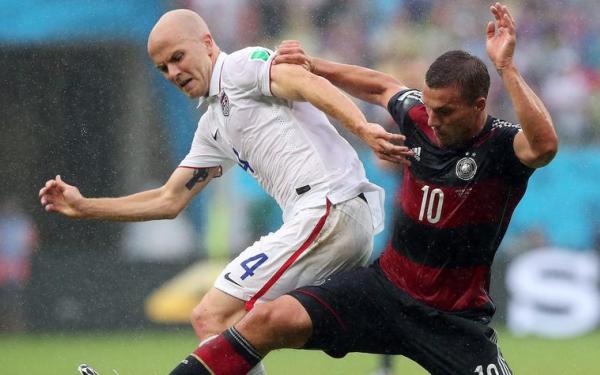 Michael Bradley, left, battling Germany's Lukas Podolski during during a World Cup group game, says of the MLS that "after almost 20 years we can all agree that...changes need to be made."
(Credit: Srdjan Suki / EPA)

The Galaxy is a 10-3 favorite to repeat as Major League Soccer champions, according to odds posted Tuesday by the online betting site Bovada.

But the odds of the MLS season starting on time appear to be growing quite a bit longer.

Representatives of the league and the players union were meeting with federal mediators in Washington, D.C., for a third straight day Tuesday in an effort to hammer out a new collective bargaining agreement. The previous agreement expired Jan. 31, and without a new one the players say they will not take the field.

The biggest issue still to be resolved is free agency. The players say they won't accept an agreement without it. The league says its single-entity structure doesn't allow free agency.

All 20 MLS teams are owned by the league. Investor-operators handle the day-to-day business of running and marketing the clubs. Under that set-up, the league says it would essentially be bidding against itself for the services of players who become free agents.

Both sides have refused to discuss publicly the pace of negotiations, but the league says it is prepared to sacrifice this weekend's games -- including Friday's season opener between the Galaxy and the Chicago Fire at the StubHub Center. The first indication of whether an agreement is close could come Wednesday morning. The Fire is scheduled to leave Chicago then but the team will likely change those plans if no deal is at hand.

"We are prepared for it, but we're all hopeful that we are able to bang through these issues," Commissioner Don Garber said of the possibility of a strike.

Negotiations on the last collective bargaining agreement in 2010 also went down to the wire with an accord being reached less than a week before the opening games. But with many of the same issues from 2010, such as freedom of movement for players, back on the table some union members feel the union compromised too much to get that 2010 deal done. As a result, they say they are prepared to strike this time around.

The union voted overwhelmingly in favor of a walkout in 2010. Dan Gargan, one of the Galaxy's player-representatives to the union, declined to say whether a vote has been held this winter.

"We’re keeping that in-house," he said.

The only other strike in U.S. soccer history took place in 1979 when owners in the now-defunct North American Soccer League refused to bargain with the players union despite the fact that more than 90% of players had voted for representation.

That walkout lasted just five days and matches were played as scheduled with some clubs fielding their entire first teams and others playing lineups filled out with amateur players signed to one-game contracts.