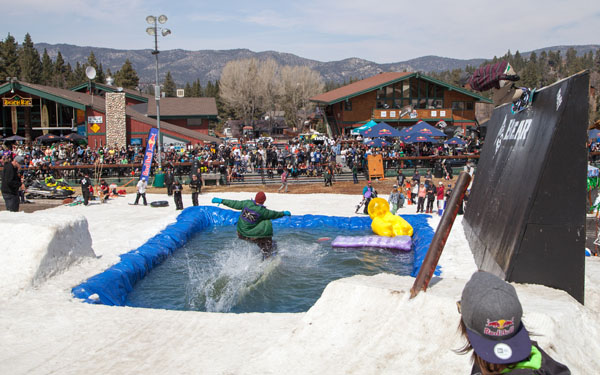 As Southern Californians, we’re lucky enough to live in a slice of the world known for an assortment of natural landscapes. Sunny beaches, lush mountains and stellar ski resorts—we’ve got it all. And with the coastline only a mere drive from the snow, SoCal is a near-perfect harmony of opposites, minus 100 miles or so. But once again, the folks at Big Bear Mountain Resorts are closing that gap. On March 21st, Bear Mountain will host Neff Beach Bash, their annual end-of-the-season celebration, bringing the surf to the snow, the sand to the slopes.

Sponsored by Neff Headwear, a giant in the action sports industry with a motto of “forever fun,” Neff Beach Bash is primarily a snowboarding competition. With the event open to the public, anyone can enter, trying his or her hand at over $3,000 in prize money. The competing arena will feature a man-made pond for contestants to skim, hop, flip and slide across rails spanning the gap. Apart from soaking in the late-season sun and snowboard action, non-contestants will enjoy Wahoo’s Fish Tacos and tunes from two Djs spinning atop a pond submerged yacht.

Also on tap for the day is the Red Bull Switchboard, an annual event shuttling college students to the mountain after surfing in the morning. “There will be 600 partying college students,” said Tanbara, which is the perfect mix for the day’s shenanigans. “Like college kids, the action sports industry is very young, very hip and into the music scene.”

For months, rumors within the industry about a Mammoth Mountain/Bear Mountain merger have been bustling like a late-season snow flurry. And with the deal just recently closed, this means big things for SoCal boarders and skiers. “Now people who are Mammoth enthusiasts are coming down to Bear to check it out,” said Tanbara.

And what better time than right now?

“This has been our most profitable season probably in the past four years,” said Tanbara. “We peaked out of just shy of 200 active features in the park at Bear. There’s no other park in the nation that gets close to that, even with a good snowfall. And, we have a couple storms coming that should carry us through the end of the season.”

With the recent snowstorms, snowmaking and the approaching close of a superb season, there’s reason to celebrate. Neff Beach Bash, Red Bull Switchboard and industry day, sponsored by Malakye.com (a slalom style event for action sports personnel), will provide a needed fix for SoCal snow bums to last them through the long summer months.

“Let’s not call it silly, but in a way it is,” chuckled Tanbara. “It makes you want to laugh. You could be the most grumpy person ever but once you show up at this event, you won’t be able to fight back a big smile.”