It's all fun in the sun for L.A. rap trio Warm Brew 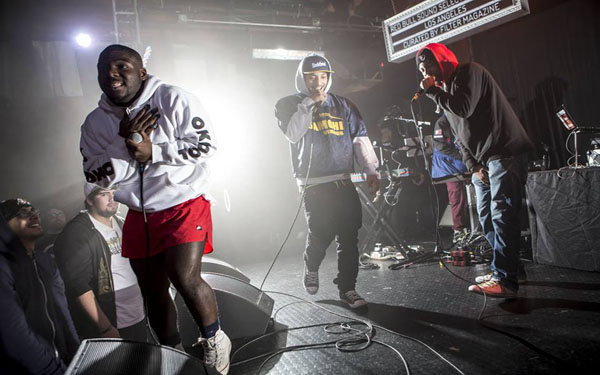 It’s no secret that your environment impacts your attitude. From Thoreau on Walden Pond to Dr. Dre in the streets of Compton to Shamu at SeaWorld—the settings we live in have a direct role in how we see the world. For L.A.-based hip-hop collective, Warm Brew, the creative energy of Venice Beach and surrounding neighborhoods has helped the group invent a distinctly West Coast sound. While listening to the trio of twentysomethings, the heyday of West Coast rap—Dre, Snoop Dogg and Tupac—is nostalgically brought back to life.

Serk Spliff, Manu Li and Ray Wright make up Warm Brew, a collaboration that’s been around since recording tracks in their parents’ garage while attending Santa Monica High School. Today the band has been compared to hip-hop power crews like The Pharcyde, Bone Thugs-N-Harmony, Jurassic 5 and A Tribe Called Quest. In 2013, they signed to Dom Kennedy’s label OPM. Their latest album, Ghetto Beach Boyz, debuted at number seven on iTunes’ hip-hop chart. But they’re not letting the recognition get to their head. They just want to make good music and have a good time. We caught up with Warm Brew and discussed the latest album below.

Campus Circle: Take us back. How did Warm Brew start?

Serk Spliff: We’ve been friends for a long, long time. We made the decision back in ’09 to really focus on music and try and change the culture. If you asked us in 2010 if the music scene around LA was in a good place, we would’ve said, “hell no.” So we set out on a journey to change that. We’re still on that quest.

CC: What’s the dynamic like? Are you competitive with each other? Supportive?

Manu Li: When we’re in the studio, we have a friendly competition. We just want to make the dopest stuff possible. We all just vibe off each other. We start talking about ideas that we come up with when we’re alone. It all comes together.

CC: Where exactly did the name come from?

Ray Wright: [laughs] There’s not really a reason behind it. It just happened. Certain things connect with us, like drinking and different sh*t like that.

CC: Does it have anything to do with drinking warm beer?

CC: Where do you look to for inspiration?

Spliff: We really get inspiration from everything, like daily basis stuff. I read a lot so I try and take away certain things from that.

Li: I find inspiration from everything—music, the beach, TV shows, everything. It’s sunny all the time out here; that definitely has an impact. Also, the fact that we’re not rich, that plays a role in our music.

CC: A lot of rappers today talk about how rich they are, the women they sleep with, etc., but you guys don’t seem to do that. What do you prefer to rap about instead?

Wright: We never really had money. It’s not like we weren’t able to do things or that our parents weren’t helpful, but we weren’t going to talk about sh*t like that. It’s ignorant. We make music for the people—for when you’re sad, for when you want to party, whatever.

CC: What’s changed from before you guys signed with Dom Kennedy’s OPM to after?

Spliff: We’ve definitely gained a little more notoriety. We’ve been able to get our music to a lot more ears. They’ve opened up a lot of avenues for us that we previously weren’t able to touch. But at the same time, I think we benefit OPM as much as they benefit us. Musically, it’s been no different and the way we go about our lives, it’s the same. We still know who we are. But it’s been fun. Dom’s a great dude. We’re happy to be with them.

CC: Ghetto Beach Boyz debuted at number seven on iTunes’ hip-hop chart. Did you expect the album to do so well?

Wright: It wasn’t a complete shock. We know that’s how it should be. We know we’re capable of that.

Li: In the process of making this album, our goals weren’t directed at doing well on the charts. It’s not about that for us. We weren’t hoping to go on the internet and see Warm Brew at number one. We’re more excited about the energy from fans.

CC: What sets this album apart from the rest of your work?

Wright: Maturity. From album to album, song to song, we’re always growing. With this album, people can listen to the whole thing through because it’s like a story. Everybody can relate to at least one part of the album.

CC: What’s the ideal setting for laying down a track? Who's in the studio, what're smokin' on, what're you sippin' on?

Spliff: Obviously I’m going to need Manu Li and Ray in the studio. Al B Smoov and Hugh Augustine need to be there, too. And I’ll be sipping on Bulleit [whiskey]. I’ll put a bullet right to the throat. I’m not really a tree connoisseur so I’ll leave that up to Ray.

CC: It’s been a longtime since the heyday of West Coast rap—with Snoop, Dre, Tupac—but would you say that there still is a distinct West Coast sound? Does Warm Brew embody that?

Wright: Everything changes with time. As much as we want to go back to that stuff, we still want to advance ourselves. I think we still embody it though.

Spliff: Nobody has come from where we’re from exactly so I think we’re making a pretty different rendition of the West Coast sound. We’re making our version of it.

Li: I think a lot of the best music is coming out of here. There’s not a lot of people on the scene out here that are terrible. Everyone has their own version. I think people hear our music and go, “damn, that’s West Coast.”

CC: If you could collaborate on a song with one artist, alive or dead, who would be?

Li: I guess Tupac. He was the coolest. Or Bob Marley.

Spliff: That kid that was playing the drums for Santana at Woodstock

Wright: Snoop. I think that he would wanna f*ck with us. He would be hella smoked and just joke the whole time. We don’t always do that because we’re serious in the studio but I think we’d mix well with him.