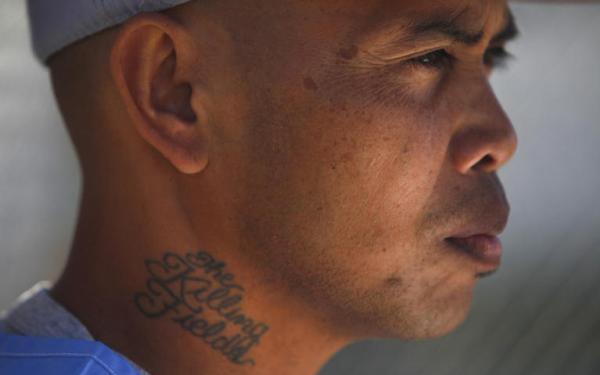 Phoeun You is one of several inmates at San Quentin who wrote his own obituary for a class project.
(Credit: Mark Boster / Los Angeles Times)

In the wrong writer's hands, an obituary can be a dull collection of biographical facts, the type of article that journalism professor William Drummond calls the "lowest common denominator" of newspaper writing.

But on this day, he hoped for something more profound from his students, even if his classroom wasn't filled with the high-achievers he was accustomed to teaching at UC Berkeley. Drummond was across the bay in San Quentin State Prison, where he was introducing inmates to the basics of covering the news.

The obituary assignment came with a twist. Instead of writing about a pop star's overdose or a political leader's assassination, Drummond told his incarcerated students they would be writing about a different death: their own.

They would choose how they would die, and they would sum up their own lives however they wanted.

"I did it as a way to find out how these guys had reconciled their crimes," Drummond said. "Were they able to take a critical look at what got them in trouble?"

The inmates, he recalled, were uncomfortable. These were people who were best known for their worst decisions — stabbing a man to death, gunning down a bystander, robbing banks.

The resulting obituaries were reflective, outlandish, candid, evasive, aspirational. Above all, they showed how people who have wronged society would like to be remembered.

At approximately 12:30 p.m., lifer inmate Phoeun You, died from multiple stab wounds from saving the life of Daniel Bryant — his teacher/supervisor.

Phoeun You's heritage is tattooed on his neck — "the killing fields." He escaped the genocidal Khmer Rouge in Cambodia when he was a child, reaching Utah as a 5-year-old refugee with the rest of his family.

"It snowed, and there was nothing but white people," the 41-year-old recalled.

Three years later, the family moved to Long Beach, yet another culture shock.

Lonely and disconnected, he linked up with an Asian gang. He fathered a son and a daughter.

One day, You said, he was picking up a friend in a high school parking lot when they got into a fight with Latino gang members.

Afterward, "I went to go find a weapon. … I wanted that payback." He didn't find the people from the fight, but he found someone else and opened fire.

"It was just a guy who looked like a gang member," You said. "He was close enough."

The victim was 17, and others were hit by bullets too.

You was convicted of murder and attempted murder in 1996 and has no chance of parole until 2025. He could spend the rest of his life behind bars.

In his obituary, You doesn't mention his crime. Instead, he describes a heroic death — being stabbed while trying to break up a racially charged fight in a prison classroom.

"Mr. You observed what was about to take place and stepped in front of Mr. Bryant in hopes of diffusing the situation," he writes. He is stabbed and dies immediately.

Sitting in the prison yard, You explained his choice of death: "My incarceration, the reason I'm here, is by taking a life. When I leave this world, I would love to leave saving a life."

He saw himself as a man with many faults yet he was on a constant path to become a better man and heal the tears that he felt he had placed in the universe.

San Quentin is California's oldest prison, and for some inmates who have bounced around the state's penal system, it's the best place to do a long stretch of hard time. Despite its medieval appearance, there's a steady supply of volunteers from liberal Bay Area enclaves who organize creative and educational programs behind the walls.

Since Julian Glenn Padgett arrived in 2006, he's enrolled in academic classes and played Shylock in a prison production of Shakespeare's "The Merchant of Venice." Even while sitting in a cramped storage closet during a break from his work at the inmate-run newspaper, he spoke with the intensity of an actor on stage. Asked about committing murder, he cited a Walt Whitman poem.

Padgett stabbed and killed a man he believed was a romantic rival. Therefore, his victim cannot "contribute a verse" in "the powerful play" of life.

"I don't want to be remembered as the man to do that," he said. Like You, he doesn't mention his crime in his fictional obituary.

Padgett, a 51-year-old Ethiopian Jew who wears a knit kippa over his dreadlocks, was convicted in 1997 in Sacramento and isn't eligible for parole until 2023.

His obituary is brimming with passion for outdoor activities that are out of reach.

"Julian loved everything to do with nature," he writes, "and often took trips with many of his friends on the weekends where they would go camping, horse back riding, snow and water skiing and his favorite mountain climbing."

Padgett describes an epic death from an earthquake striking the Bay Area. It was the first thing that came to mind, he said.

"Earthquakes are memorable. They're forces of nature," he said. "To take me out, it would take something like that."

On the morning of his 55th birthday, Juan Haines did not answer to repeated calls by his cellmate at San Quentin State Prison.

Built like a welterweight, his bald head overflowing with ideas, Juan Haines doesn't shy away from uncomfortable topics. He's written about transgender inmates and hunger strikes, and when it came time to write his own obituary, he didn't think twice about including his crimes.

He figured everyone already knew about the bank robberies that earned him a sentence of 55 years to life, he said.

But most of the 57-year-old's obituary focuses on his childhood in San Diego, including a wrestling match victory and a stint as junior class president.

The longest quote in the article comes from a classmate testifying to his high school leadership skills.

"He built the treasury from just a couple of dollars, to several thousand. His biggest accomplishment was at Homecoming, our float was the biggest one, and our Junior Class Ball was held at a big fancy hotel. The seniors were somewhat jealous."

Despite his candor about his conviction, the obituary focuses on his younger days.

"That was when I was actually doing what I wanted," he said. "I was on track."

Haines added, "Once I got derailed, that was it."

Friends and family of Mr. Burns said his death was tragic because he was trying to help others.

George Burns envisioned a noble end in his obituary. In the early morning darkness, he would stop by the side of the road to help someone with a flat tire, only to be struck and killed by a speeding driver.

"George was the type of person that loved helping those that were less fortunate and needed help," Burns wrote. "His heart was made of gold."

Although he wrote about his desire to be a positive influence, Burns was also upfront about his crimes in the obituary.

"Mr. Burns early life was rocky he was in and out of jail," he wrote in one fragmented sentence. A gang member in Sacramento, he was convicted of robbery and firearms charges in 2001 and sentenced to prison for 31 years and eight months.

In his obituary, Burns wrote about enrolling in college classes and trying to turn a corner while in prison.

"During this time is when he started changing his ways and attitude toward life," he wrote. "George begun to get involved in things that would benefit his future."

It was a future Burns didn't see. A little more than a year after writing his obituary, he died in San Quentin. He was 42. The Marin County coroner's office said the cause of death was heart disease.