Classes that go off the grid help students focus 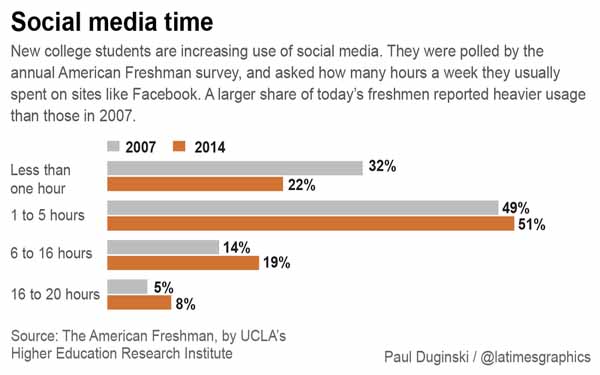 USC professor Geoffrey Cowan is a scholar of free speech and communication. But Cowan, the former dean of the Annenberg School for Communication and Journalism, insists that students sometimes should be cut off from the social media and websites that are so prevalent in their lives.

Cowan bans the use of laptops, cellphones and wireless devices during the freshman introductory class "The Changing World of Communication and Journalism" that he co-teaches in the fall with current Annenberg Dean Ernest J. Wilson III. Like a growing number of professors nationwide, the USC professors say that electronic equipment, even just for note taking, causes students to mentally disconnect from lectures and distracts them from class discussions.

The sneaky, or sometimes brazen, texting, Web surfing and Facebook browsing disrupts the teaching and learning environment, they say.

Students "think they can multi-task but they are losing the train of thought and not engaging in the conversation going on," Cowan said. Since he began banning the devices three years ago, he said, the course is "a much more rewarding experience" for students as well as professors.

His policy, detailed in the course syllabus, is a reaction to how much the current generation of college students relies on — some would say is addicted to — cellphones and the Internet in ways that were unthinkable 10 years ago.

The effect of such technology on academic and social lives is now being scrutinized.

A recent study at Michigan State University tracked 500 students in an introductory psychology class and found that the more they used the Internet for nonacademic purposes such as reading Facebook during class, the lower their test scores in that course were. That was true "regardless of intellectual ability" measured by entrance exams taken during high school, according to the research published in the Computers & Education journal.

Other research published last year in the Psychological Science journal suggested that students learn concepts better if they take notes in longhand than if they type them on a laptop. Students who type too often try to transcribe lectures verbatim, which is "detrimental to learning," while students reframe and distill ideas when they write notes by hand, said the study, titled "The Pen Is Mightier Than the Keyboard."

USC sophomore Kate Guarino said that she appreciated Cowan's ban when she took the class with about 80 other students last year. "It is helpful not to be distracted," especially in courses that emphasize concepts, rather than data. But in other classes that are more data heavy, she finds it useful to take notes on her laptop.

Guarino, a print and digital journalism major, said it is "incredibly common"' for students to peek at Facebook and news sites during college classes.

"Students in our generation may be less focused because we are using technology more," she said. "But I'm sure college students were distracted 20 years ago too. Maybe they were more likely to fall asleep in class or just daydream."

Sarah Collins, another USC sophomore, said she wished more professors required laptops and phones to be turned off during class. "It was just nice to have everyone in the present, and it led to more participation," she said of the class led by Cowan and Wilson.

But Collins, a broadcast journalism and political science major, said she would not support an across-the-board ban. She takes notes on her laptop in some classes and sometimes legitimately Googles topics to bolster class material, such as researching a court case that is relevant to a political science discussion.

Yet she also admits sneaking looks at Facebook and news sites: "Obviously I know I shouldn't do it. I catch myself and guilt-trip myself to keep it brief."

The annual American Freshman survey, conducted by UCLA researchers, investigates many habits and attitudes of new college students nationwide. Among other things, this year's results show a growing technological gap among generations.

About 27% of college freshmen said they had spent at least six hours a week on social media networks such as Facebook and Twitter during the previous year, up from about 19% in 2007 when the question was first asked. About 8% reported that they were on those sites at least 16 hours a week, up from 5% of students seven years earlier. (The survey did not ask how much of that was during classes.)

The survey also showed that nearly all students frequently use the Internet for academic research.

The Internet's dominance has a mixed effect, according to Kevin Eagan, interim managing director of UCLA's Higher Education Research Institute, which conducts the poll. Faculty members are concerned about the possible use of smartphones to cheat during tests and students' ability to conduct traditional off-line research in libraries, he said.

On a more positive note, students thrive when given access to supplementary course content online and are able to contact faculty for advice via email and online chat groups, he added.

At USC, Cowan does not extend the ban to all his classes. He allows laptops and Internet use in a "new media" seminar that enrolls 20 graduate students, including some older professionals. In that setting, looking up some topics on the Internet during class, he said, "can contribute to the conversation."