Joc Pederson is center of attention for Dodgers this spring 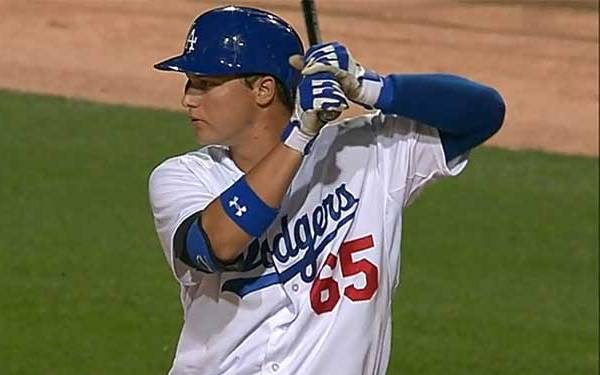 Whenever Joc Pederson's name appeared on the caller ID display on his phone this winter, Dodgers utility man Justin Turner knew what the conversation would be about. Only one subject that interested Pederson.

"He doesn't talk about anything but hitting, ever," Turner said.

Pederson would tell Turner about a recent batting practice session, how he tried this with his hands or that with his feet.

Turner listened and sometimes offered advice, knowing the 22-year-old Pederson was preparing for the most important spring of his life.

The most valuable player of the triple-A Pacific Coast League last season, Pederson entered the Dodgers' Cactus League season opener Wednesday as the odds-on favorite to be the center fielder on opening day of the regular season. Pederson was two for two with a double and a run as the team's designated hitter in a 6-4 loss to the Chicago White Sox at Camelback Ranch.

Manager Don Mattingly has said Pederson would have to win the position in camp — "Nobody's handing Joc the keys to the car," Mattingly said — but the front office wants Pederson to be the center fielder.

Yasiel Puig played 52 games in center field last season, but the Dodgers want him in right field, where they view him as an elite defender. Carl Crawford can play only left field. Andre Ethier has played 140 games in center field over the last two seasons, but he lacks the speed generally associated with the position.

The question is, will Pederson hit? Pederson's major league experience is limited to 18 games, all last September, when he often looked overmatched. He batted .143 and struck out 11 times in 38 plate appearances.

The strikeouts were a problem in the minor leagues too. Pederson hit 33 home runs and stole 30 bases in triple A, but struck out 149 times.

"It's definitely something I could work on," Pederson said.

Nonetheless, the Dodgers were confident enough in Pederson to trade Matt Kemp to the San Diego Padres. If Pederson starts in center, Puig will move back to right, which was Kemp's position at the end of last season.

Asked if he feels he has to justify management's decision to trade Kemp, Pederson replied, "That's out of my control."

Blocking out distractions was another thing Turner talked to Pederson about.

On the surface, Pederson and Turner are something of an odd couple: Pederson a blue-chip prospect, Turner a 30-year-old reserve.

They became acquainted in camp last year, when they were placed in the same hitting group. "We had some of the same ideas about what we were trying to do," Turner said.

Turner liked that Pederson was inquisitive.

"He loves to talk hitting," Turner said. "He's not afraid to ask questions, which I love. One of my pet peeves is when you're around guys who have a lot of valuable information and you don't ask them anything. When I'm around guys, I ask questions. I want to know what they're doing, what they're thinking, because I want to learn."

Even after Pederson was sent to the minor leagues, they maintained in contact. When Pederson was promoted to the Dodgers in September, Turner invited him to live with him.

They reconnected again over the winter. Pederson lives in Northern California but spends a part of every off-season working out in Los Angeles. This time, he had a place to stay.

Pederson and Turner worked out together at Dodger Stadium under the supervision of strength and conditioning coach Brandon McDaniel. Turner introduced Pederson to his old off-season hitting instructor, Doug Latta.

"He took me under his wing this off-season and showed me a few new things, how to prepare for a long season," Pederson said. "I'm fortunate for Justin taking me in."

Turner isn't above reminding Pederson he is a rookie, telling him he will have to make coffee runs for veteran teammates and wear a costume on rookie dress-up day.

"How are you going to balance making coffee runs and try to play center field and hit baseballs every day?" Turner asked on a recent day.

"It's tough," Pederson replied. "You've got to prioritize."

"Do you know where the closest Starbucks is to every road stadium?" Turner asked.

"Siri has helped me with that," Pederson said of the iPhone answer woman.

Turner later explained this was his way of helping Pederson feel comfortable in the clubhouse.

"We want him to play well when he gets up here," he said. "He's already got enough pressure on him as it is."