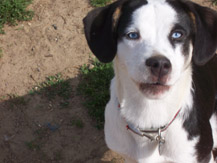 In the chaotic city of Los Angeles, a place of close-knit houses and jam-packed freeways what’s a dog to do? After all, dogs just want to have fun too.

They crave to let loose – whether that means a game of fetch, wrestling in the mud or gallivanting around with their 4-legged friends.

Some call these peaceful oases’s hound heaven but dog parks can be best described as a Disneyland for dogs, otherwise known as the happiest place on Earth.

Dog parks have become places where dogs can run free and socialize with their own kind while their owners can build relationships with other fellow dog lovers.

They are gaining in popularity, and dogs certainly know why – there is nothing as much fun for a dog (and its human) as to run around off-leash, and play together in a nice park. Here in Los Angeles, there are many dog parks to choose from, each offering its own unique escape from the boring backyard.

Right off legendary Mulholland Drive in the Hollywood Hills, is the Laurel Canyon Off-Leash Dog Park, an expansive enclosure packed with dogs of all shapes and sizes, and their human friends of course. Dogs will have a field day in this huge stretch of lush green grass.

There is plenty of area to play a game of Frisbee or ball without interfering with others and the dogs will love the large amount of territory they can cover, romping around, sniffing out the crowd. But make sure to keep your eyes on your dog, the place is big enough to lose your dog momentarily.

Nestled between downtown L.A. and Hollywood an independent identity has established itself around a closed reservoir. Here, in this close-knit community there is a mixed crowd of alternative and independent lifestyles.

A social circle has established itself around this park, developing into somewhat of an event. Walking the dog is a strategic way to make a date, meet new friends or even land a passing fling.

With a dog park right at its base, Runyon Canyon is a place for dogs lovers, hikers or basically anyone who loves the outdoors. The wide path up Muholland Drive or one of its dirt trails is a great place to exercise yourself and your pooch or just to take in the beautiful view of the L.A. basin.

The rich and famous apparently also take to the charms of Runyon Canyon so be on the lookout for celebrities in sweats, baseball caps and expensive sunglasses.

As one of the most social dog parks, this Redondo Beach location provides a place for dogs and their owners to get to know one another. The park also sponsors many special events such as dog training courses and K-9 demonstrations throughout the year.

It’s a great place to keep up to date on issues such as pet adoption and vaccinations. You need a dog to enjoy this place, but don’t worry if you don’t have one. Adoption fairs are held on the second Sunday of every month, unless it rains.

In one of the cleanest, most well kept parks around, the Long Beach Dog park is a relaxing retreat for you and your dog. The tall pine trees that surround the park help keep it shady, which adds to the soothing, low-key aura of the place.

While some dogs prefer to lounge around under, or even on top of, the picnic tables and benches, other will romp around the tree stumps – which provide the dogs with a jungle gym of sorts.