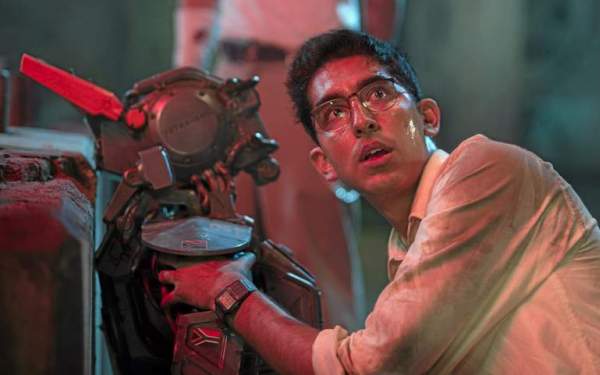 Dev Patel, the 24-year-old British actor who was catapulted to international stardom by the unlikely 2008 Oscar winner “Slumdog Millionaire,” has certainly made the most out of his big break.

This week he has two major movies opening, shot in different parts of the world — and, considering their stories and tones, what might as well be two different worlds.

“The Second Best Exotic Marigold Hotel” is the sequel to the 2011 comedy about Indian hospitality entrepreneur Sonny Kapoor (Patel) and the group of English retirees he enticed to settle in his less-posh-than-advertised Jaipur inn.

In the near-future, semi-dystopian “Chappie,” Patel’s Deon Wilson is a brilliant computer scientist working for a South African firm that has successfully deployed a line of police robots. When one of the powerful devices, and then Deon, fall into the hands of an oddly familial bunch of gangsters, the engineer gets a chance to try his secret artificial intelligence program on the droid. The resulting, independently thinking robot, whom Deaon and the criminals name Chappie, is a lovable but dangerous combination of childlike innocence and deadly force.

And that’s not all. Patel, who last year completed a regular gig on Aaron Sorkin’s controversial HBO series “The Newsroom,” will soon be seen in the indie dramedy “The Road Within” (video on demand on March 17, in theaters next month) and he’s currently filming the second of two upcoming features partially set in India: “Lion,” about a lost boy, raised in Australia, who returns to the subcontinent to find his birth family; and “The Man Who Knew Infinity,” in which he plays the pioneering, Cambridge-educated mathematical theorist Srinivasa Ramanujan.

“I went to India as a very young child, kind of unconsciously being dragged along to a family wedding in the middle of nowhere,” explains Patel, who was born and raised in the Harrow section of northwest London. “I didn’t quite understand what was going on, but the first time I really experienced India was on ‘Slumdog.’?”

“It’s quite a big part of who I am and my heritage, so it’s always wonderful coming back here,” Patel continues. “India has been very kind to me, and as a canvas it’s an incredibly stimulating, bustling place. You can put a camera anywhere and find beauty and absolute madness at the same time.”

In “Second Best,” that’s apparently part of what’s convinced the European pensioners — played by the formidable likes of Maggie Smith, Judi Dench, Bill Nighy, et al. — to stay on at Sonny’s funky residential hotel. With his typical wayward enthusiasm, he’s taken this to mean that his concept is a success and, now partnered with Smith’s Muriel Donnelly, he pitches a Marigold franchising scheme to a U.S. resort chain.

The corporation is interested, but won’t commit before a secret inspector checks out the current Jaipur operation. When an American writer, played by Richard Gere, checks in, Sonny is certain that this is the man to impress, and does everything short of pimping his widowed mom (well, he kind of does that, too) to please him.

In other business, Sonny’s wedding to Sunaina (Tina Desai) looms, and a wealthy old school frenemy returns to, seemingly, take away everything Sonny cherishes. It all seems to fall apart at one point, represented by Sonny’s terrible performance at a wedding dance rehearsal.

The scene is not that far removed from real life, Patel confesses.

“It took a great amount of persuasion and arm-twisting to get me to do that,” he reveals. “I hate dancing!”

The actor loves, on the other hand, working with those British theatrical legends who helped turn the first “Marigold” into a much bigger box-office success than anyone expected it to be.

“We came back, all very comfortable in our skin and our characters, and really just played,” Patel says. “It was a blast, and it’s definitely a joy for someone like me to share the screen with all of these greats. I’m constantly baffled in amazement, watching what they do and how consistent they are, despite the sheer heat and the amount of takes we were doing.”

In contrast, working on “Chappie” in Johannesburg was a completely new experience. Not only was the location an undiscovered continent for Patel, there was more stunt action than he had ever done before in the violent — yet oddly silly and even sometimes sweet — sci-fi parable by “District 9’s” Neill Blomkamp.

“It’s a lot better than a tennis ball, that’s for sure,” Patel says of having a real actor, rather than the standard object-on-pole for eyeline focus, to work with throughout the visual effects-heavy production. “Sharlto is incredible. It took me awhile to calibrate what he was about, but Sharlto loves to riff. He’s very spontaneous a performer, so a lot of his stuff was improv.”

Patel explains that Copley wore a gray spandex suit with a hat that had “these two kind of chopsticks sticking out for the ears,” which was definitely odd to look at each day.

“But as soon as Neill called action the guy transformed, like he flicked a switch and turned into this sort of child,” he continues. “It was incredible and always a joy to be around, and as long as you were open to it you could really find some cool things to do with it.”

As for his own computer genius role in the movie, Patel admits that was mostly acting.

“To be honest, I’m not a technophobe, but I’m very slow when it comes to technology,” he says. “I’m a creature of habit, so I’m quite late on all the trends and stuff; I still have my old BlackBerry that I’ve had forever.

“But it’s incredible, the way computers are getting cleverer and they’re getting smaller. Neill has some theories about the world becoming a supercomputer, really, and the idea of robots becoming as clever as man if not cleverer is a very interesting topic. What’s going to control what by the end of the day? Us or the bots?”