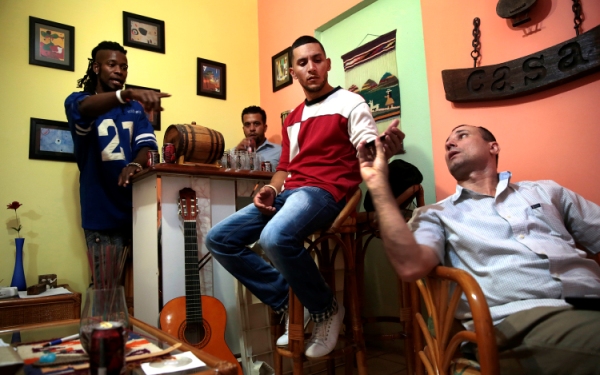 HAVANA, Cuba — With fake-diamond studs lining his lips and ears, and a tattoo carved under his dreadlocks, Omar Sayut is hard to miss.

His version of Cuban hip-hop is what you might call hard to miss too.

In another, he portrays himself as Christ, being crucified on a palm tree.

All I want is a raise

So the government will stop stealing …

No, nothing subtle here.

Sayut is part of an increasingly restive young generation of Cubans using music, art and other creative forms to express themselves on a communist-ruled island that often represses dissent and criticism. As Raul Castro allows more leeway and has joined in historic talks with the U.S. to improve relations, they’re looking for new opportunities and new exposure.

Some have fashioned ways to criticize that are permitted, or at least tolerated. Many test the boundaries, pushing, retreating, advancing over time.

Others land in jail, repeatedly.

In late December, Sayut was detained briefly when he attended a show in Havana’s Revolution Plaza by artist Danilo Maldonado involving two pigs, one marked “Fidel” and the other marked “Raul.” Maldonado, a graffiti artist and caricaturist who uses the name Sexto, remains in jail.

Around the same time, Tania Bruguera, a provocative Cuban artist who mostly lives abroad, tried to launch an open-mike performance in the plaza during which anyone, including critics of the government, could speak out. She was arrested just before the scheduled start of her show. (She has since been released.)

Even though he says he feels constantly under surveillance, Sayut, 32, seems undaunted.

His popular detective novels, often likened to the work of a Cuban Raymond Chandler, do not portray a pretty Havana; it is a city haunted by deprivation.

“With a nostalgia he found increasingly irritating, the Count surveyed the main street in his barrio, overflowing rubbish containers, wrappings from late night, last-minute pizzas blowing in the wind, the wasteland where he’d learned to play baseball transformed into a repository for junk generated by the repair shop on the corner,” Padura wrote in “Havana Blue.” “Where do you learn to play baseball now?”

His most ambitious work, “The Man Who Loved Dogs,” deals with Leon Trotsky in ways that are not in line with Orthodox Communist thought favored by the Castros.

And yet, he manages to stay free. Or perhaps Cuba’s leaders prefer not to repress someone of Padura’s international reputation. Consequently, he is often held up as the example of what can and cannot be said artistically in Cuba. And as an informal spokesman in defense of difficult Cuban artistic creativity.

“If it is true that some sectors, and especially the newspapers and television, are little more than instruments of propaganda instead of information, we also need to recognize that today many people in the cultural sector are expressing themselves with greater depth within the space of ‘conditional freedom,’” Padura wrote in a collection of essays called “Living and Creating in Cuba.”

“Doing so, of course, is not without risks. … That said, risks and censorship can also be a challenge to the imagination.”

For many Cubans, music is an endless street-corner fount of expression. A visitor to Havana can find musicians on corners or in parks, usually singing traditional, uncontroversial ditties but sometimes venturing more daringly.

On a recent weekend afternoon, two guitarists and a drummer sat in a park, taking a break from their usual job of performing for tourists at a restaurant too expensive for ordinary Cubans.

With no one in particular around, they plucked at some of the tunes made famous by the Buena Vista Social Club, then, on request from a visitor, switched to the Mexican classic “Quizas” (“Perhaps”).

“I’ve had music in me since I was a child,” said drummer Miguel Arias.

“We earn a living with this, but we also just like it,” said guitarist Roberto Vega, singing amid palm fronds.

They, like so many other Cubans, are anticipating a new era of more visitors and more freedom to join the global community and prosper.

Music has deep roots in Cuban culture, including the nueva trova popularized by stars such as Silvio Rodriguez, who in the 1970s adapted pan-American trends to sing in praise of the 1959 revolution that brought Fidel Castro to power, or against the ills of Western society. Or the older, more traditional and apolitical orchestrations from the likes of the Buena Vista Social Club.

In more recent years, Cuban rap and hip-hop have been added to the mix, often much more raw and overtly critical. And also more heavily influenced and practiced by Cuba’s large yet marginalized black community, descendants of African slaves brought to the island in the late 18th century to work the sugar cane plantations.

Sayut is black, from a family in Santiago, in western Cuba, with seven siblings and half-siblings, a mother who works as a nurse and a father who is a retired mechanic. He doesn’t talk politics with them, he says, for fear of getting them in trouble.

“Sometimes I feel like a hunted rabbit,” he said. “But it doesn’t matter.”

The staccato thump of his music suggests anger and frustration. Somewhat incongruously, he shows in his videos images of himself praying in church. Then he chants, in a piece called “The Truth”:

“They have a pistol in their hand to kill you …

You wait for them to cut off your head …”

Sayut unabashedly promotes the small Patriotic Union of Cuba, one of the dissident groups largely dismissed by the government as U.S.-supported mercenaries.

The scheme, first reported by The Associated Press, led to the arrest of several musicians and the government takeover of what had been one of Cuba’s most popular independent music festivals.

One group implicated most prominently in the USAID program (which the agency denied was secretive or illegal) was the hugely popular Los Aldeanos. Its hard-hitting lyrics were candidly critical of the government, with titles such as “Long Live Free Cuba.” After the reports surfaced, the group’s members moved to Florida.

The ability to criticize artistically is often a tug of war.

Among those who defended Los Aldeanos, saying the group had been unfairly duped by the Americans, was Rodriguez, the nueva trova star, whose son was among those caught up in the scheme. He accused USAID of “manipulation and intervention.” But he also offered subtle criticism of the Cuban government:

“Should an artist be automatically discredited just because he doesn’t think like you?” Rodriguez wrote on his blog.

Music often gets a free pass from the government, in part because performers are limited in their ability to disseminate their work. Internet access in Cuba is among the lowest in the hemisphere, available mostly to those with money or privilege. Sayut’s YouTube page has few hits, and he says his Twitter account is frequently blocked by state censors.

“Music gives an outlet where (performers) can be honest and critical without getting thrown in the slammer or losing their jobs,” he said.

However, as relations improve between Cuba and the United States, and technology expands, giving more voice to the musical critics, the government could find more reason to crack down.