Chappie pits man vs. machine in the slums of Johannesburg 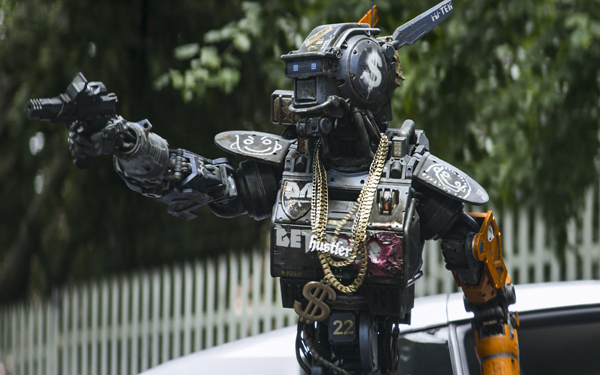 Two camps divide humanity when it comes to technology. One is fueled by fascination, the other by fear. The first wonders if we can program sophisticated A.I. capable of human companionship, i.e. Spike Jonze’s Her. The other finds technology scary and untrustworthy, i.e. your grandparents. With Chappie, the latest South African sci-fi thriller from Neill Blomkamp, the technology debate comes to life through a sentient robot that gets caught up in the criminal underground of Johannesburg.

Instead of apartheid, like his 2009 breakthrough District 9, Blomkamp’s Chappie uses his sprawling, crime-heavy and racially divided hometown as backdrop for an examination on the future of technology. Just like RoboCop, this fantasy future has robots programmed for preventing crime. The nerdy but noble creator of the crime fighting bots is Deon (Dev Patel). Alongside Deon is Vincent, a God-loving, gun-toting war vet played by Hugh Jackman sporting a NASCAR-fan mullet. When Deon creates a program enabling awareness in the bots, Vincent plots against him believing that man and machine should be separate. But before Vincent can activate Moose, his human operated war machine aimed at quelling the robot awakening, a gang of thugs captures Deon and his sentient creation.

Hip-hop ravers and sketchy tattoo enthusiasts, Die Antwoord, play the lowlife criminals who kidnap Chappie and Deon. In their big screen debut, Ninja and Yo-landi Visser of Die Antwoord steal the show with their viral eccentricity. Their plan is to make Chappie their personal crime colleague or as Ninja puts it, “the illest gangsta on the block.” To the dismay of Deon—who hopes his creation will learn art, culture and poetry—Chappie adopts a pimp-limp walk and a dope boy vocabulary. But despite passing classes in crime college, Chappie maintains a childlike innocence.

Chappie has many things going for it. Stunning visuals—adept robot CGI set against a colorful graffiti underworld influenced by Die Antwoord (Yo-landi sports a neon pink Uzi machine gun). Originality in a sea of sameness—Chappie pulls from many previous films (A.I., Transcendence, RoboCop) yet still maintains a creative freshness. A top-notch cast—if you can see past Jackman’s mullet, the film has Patel (Slumdog Millionaire), the otherworldly oomph of Die Antwoord and a substantial cameo by Sigourney Weaver.

Where Blomkamp falls short is in narrative depth. The predictable climax—plotting Vincent vs. Deon, Chappie vs. Moose, man vs. machine—is a visual bonanza. But there is a true philosophical debate here—what constitutes awareness? Where do we draw the line with technology? However, instead of addressing this, the film opts for bombs and blood over meaningful introspection.

Like with District 9, Blomkamp may surprise viewers with the ending. It’s a daring move that garners the director his deserved praise for originality. While District 9 ended with a cliffhanger, likely setting the stage for a sequel, Chappie’s close is more conclusive. But it’s no less powerful. Blomkamp illustrates that whether we like it or not—whether our iPhones are an extended limb or if we think an emoji is a type of sushi—technology’s integration into human life is unstoppable.