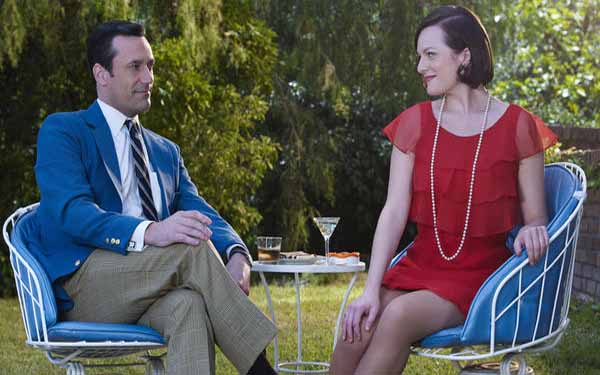 It should come as no surprise that “Mad Men,” a drama about a 1960s advertising firm, has designed what it hopes to be an unforgettable send-off campaign.

The pioneering AMC series will launch its seventh and final season on April 5 — culminating in a swan song that probably will generate the kind of frenzied chatter last seen by its sister drama “Breaking Bad” in 2013.

To rally viewers as the end draws near, the network is promoting the final stretch of the drama with a multimillion-dollar marketing campaign. There’s even a black-tie ball at the Dorothy Chandler Pavilion for its premiere.

“This show changed our network, period,” AMC President and General Manager Charlie Collier told The Times. “This show means something as our first, and we wanted the send-off to reflect that.”

The drama, created by Matt Weiner and produced by Lionsgate, made its debut in 2007. Despite undersized ratings, it was praised by critics and would go on to ingratiate itself into the zeitgeist — spawning countless analyses and even a reference by President Obama during last year’s State of the Union address. It became part of the disruptive basic-cable troop that demonstrated good shows with a lasting effect were not limited to broadcast and premium cable.

And as the first breakthrough drama for AMC, once a repository for classic movie reruns, it helped the network establish itself as a destination for high-quality content, paving the way for such shows as “The Walking Dead,” “Breaking Bad” and “Better Call Saul.”

In place of a thank-you note for the drama that’s been crucial to its rise, AMC is getting creative.

A major component of the goodbye was a 60-second retrospective commercial that aired during the Academy Awards. It was a minute of airtime that didn’t come cheap, probably costing the network as much as $3.5 million for the time — slightly more than the average cost to produce one episode of “Mad Men.”

It’s just a fraction of the send-off that is sizing up to be more elaborate than that of “Breaking Bad.”

A smattering of “Mad Men” testimonials — from the likes of Bryan Cranston and, even, Keith Olbermann — have rolled out on the network during commercial breaks for “The Walking Dead” and “Better Call Saul.” A drip-drop of promotional images have hit the Internet and will adorn billboards, bus sides and telephone kiosks.

In a nod to its mark on popular culture, it will join the permanent collection at the Smithsonian National Museum of American History next month — with Don Draper’s gray suit, fedora and bar cart slated to be on display. Numerous other events at major cultural institutions in New York and Los Angeles will also take place.

There will also be an art installation outside the Time-Life building in Manhattan — the building that served as the fictional home of Sterling Cooper & Partners.

Linda Schupack, executive vice president of marketing for AMC, said the campaign adheres to the idea of it being the end of an era in more ways than one: The characters of “Mad Men” are moving on from the 1960s, while viewers are saying goodbye to a drama that helped usher in the new golden age of TV.

“We have been thinking about this for a very, very long time,” she said. “The only way to go pay tribute to a show that is unlike any other is to go out big.”

Of course, the cable network — a unit of AMC Networks Inc. — is hoping the big-budget drama goes out big in other ways.

At its peak in Season 5, the drama averaged 4.16 million viewers — about one-fifth of what “NCIS,” the top broadcast drama in total viewers that year, garnered. Despite “Mad Men’s” modest audience, the network has seen an uptick in advertising revenue thanks in part to the upscale audience the drama attracts with its patient, highbrow storytelling.

AMC’s ad revenue for 2014 — which included the first half of its final season — was $469 million, up 7 percent from the previous year, according to SNL Kagan, an industry consulting firm. To be clear, “Mad Men” isn’t responsible for it all, but the show does command higher ad rates than some broadcast network programs with larger audiences.

“It’s the kind of buzz-worthy programming advertisers are looking for,” said Darcy Bowe, a vice president at advertising giant Starcom USA. “Media buyers knew they were going to get a certain caliber of audience when buying time on ‘Mad Men.’”

As such, the last seven episodes of the period drama are expected to nab top-dollar advertising rates for cable television among marketers trying to align themselves with Don Draper and his Madison Avenue cohorts before it ends. Its final beat is likely to produce the highest revenue in the show’s run.

The cable network refused to sell time for the final episode of “Mad Men” to advertisers during last year’s upfront sales. Instead, it wanted to save the episode to boost the price closer to air time.

However, with its hallmark series on its way out, AMC is losing another breakout hit. This has stirred some concern on Wall Street, according to Bank of America/Merrill Lynch analyst Bryan Goldberg.

“The focus amongst analysts about AMC’s ability to continue to launch compelling programming in an economically appealing way was of concern, primarily last year because that was the year they were going to see the financial impact of not having a marquee show on the air,” he said, referring to “Breaking Bad.”

Since “Mad Men’s” debut, AMC has launched 10 original scripted dramas — to mixed results. Last year’s new entrants, “Turn” and “Halt and Catch Fire,” have yet to establish themselves as cultural touchstones.

The “Breaking Bad” spin-off, “Better Call Saul,” had a promising launch last month. The show’s opening episode was seen by 6.9 million viewers, and a cable-debut high of 4.4 million adults 18 to 49. The Monday night launch left analysts more comfortable with the idea that AMC can move past “Mad Men” on good economic footing. And, of course, the network is home to “The Walking Dead,” the No. 1 show on all of television among the advertiser-preferred demographic of adults 18 to 49.

“Certainly they are trying not only to replicate the success of previous years but to build from that success,” said Amy Yong, an analyst at Macquarie. “And they are trying to expand into a new night, which is a risky thing. Monday audiences are different from Sunday audiences. But the outlook, so far, is good.”

That is crucial when considering that cable networks rely heavily on programming fees paid by cable and satellite providers. Quality programming with ardent fan bases allows cable networks like AMC to bump up the fees they charge.

AMC, which reaches about 96 million homes, charged providers an average of 38 cents a month for each subscriber in 2014, up 9 percent from 2013. The increases in these so-called affiliate fees, as well as sales of its programming to video on demand services, led research firm MoffettNathanson to substantially increase its revenue estimates for AMC Networks this year.

AMC Networks should generate nearly $2.6 billion in revenue, a 17.4 percent increase over 2014 levels, according to the research firm’s estimate.

It’s the kind of outlook that Don Draper might celebrate over an old fashioned.

For Weiner, the notoriously secretive creator at the helm of “Mad Men,” the celebration is in looking back as the network moves forward.

“It was exciting to be at the start of something where there were no rules and where everyone had an optimistic attitude despite limited resources and a seemingly impenetrable marketplace,” he said by email. “We’re all still processing the fact that it worked out.”