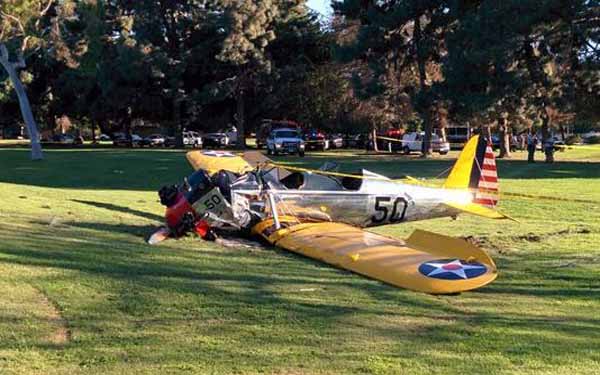 LOS ANGELES — Harrison Ford was recovering Friday after his vintage plane crashed on a golf course not far from Santa Monica Municipal Airport.

Just blocks from the runway, the plane clipped a tree at the Penmar Golf Course in Venice, then landed on a fairway.

“He had no other choice but to make an emergency landing, which he did safely,” Ford’s publicist, Ina Treciokas, said in a statement.

“He was banged up,” Ford’s publicist said in the statement. “The injuries sustained are not life threatening.”

After the landing, a group of golfers helped pull Ford from the plane and began administering first aid, said Carlos Gomez, who lives just yards away from the site of the crash on Dewey Street. Gomez was cooking when he heard the plane hit the ground outside.

“Dad is ok. Battered, but ok!” the actor’s son, Ben Ford, posted on Twitter. “He is every bit the man you would think he is. He is an incredibly strong man.”

The National Transportation Safety Board arrive at the crash site Thursday night and is investigating the incident.

The veteran actor had departed from the airport in his vintage Ryan plane around 2:20 p.m. He then notified the airport’s control tower about a loss of engine power, said Patrick Jones of the NTSB.

“Any time a pilot survives an accident I would say that is a good thing,” Jones said.

Ford is an avid aviator who is often seen flying vintage planes out of Santa Monica Airport. Photos show Ford piloting the plane involved in the crash, a Ryan PT-22 Recruit that’s registered to Delaware-based MG Aviation Inc., according to the Federal Aviation Administration’s records.

Ford’s aviation hobby has put him in danger before. In 1999, Ford was riding in a helicopter with his flight instructor when it crashed into a Ventura County riverbed. The “Star Wars” and “Indiana Jones” actor walked away unscathed.

Ford has been recovering from a broken leg since June. While filming “Star Wars: Episode VII” last summer, the veteran actor’s left leg broke in an accident involving the door of the film franchise’s famed Millennium Falcon spaceship. The injury required him to have surgery and go through rehab, causing a two-week hiatus in filming during August.

The landing has re-energized the debate over safety at the airport, which is located in the middle of a densely populated community.

“It’s really, really scary to think how close this was to a number of homes,” said Los Angeles City Council member Mike Bonin, who represents the Westside. Thursday’s crash is another signal that the airport “needs to be shut down,” Bonin said.

In 2013, four people died in a fiery wreck at the airport when the twin-engine Cessna Citation they were riding in touched down on the runway, then veered hard right and smashed into an airport hangar, bursting into flames and collapsing the building.

Some residents have long pressed to close the airport, saying it poses a safety risk. Pilots and others in the aviation community dispute that and say the airport is perfectly safe.

Ford, Arnold Schwarzenegger, Tom Cruise and casino mogul Steve Wynn have been among the celebrities and business tycoons who have kept planes there.

In 2013, as Santa Monica debated the airport’s future, Ford, other airport tenants and national aviation groups filed a federal complaint challenging any move to close it.

There have been at least 11 crashes involving planes coming and going from Santa Monica since 1989, according to federal records. Six were confined to airport grounds, two struck homes, two came down in the ocean and one crashed on a golf course. The airport had about 7,300 takeoffs and landings in August, the most recent month for which data was available.

Santa Monica Airport, established in 1917, is described on a city website as the oldest continuously operating airport in Los Angeles County. After Santa Monica acquired the original 170 acres in 1926, the property became the home of Douglas Aircraft Co., whose DC-3 would introduce average Americans to commercial air travel in the 1930s. At its peak, the company had 44,000 employees, and Los Angeles and Santa Monica encouraged the building of housing right up to the airport’s perimeter.