Clippers go from beat up to upbeat 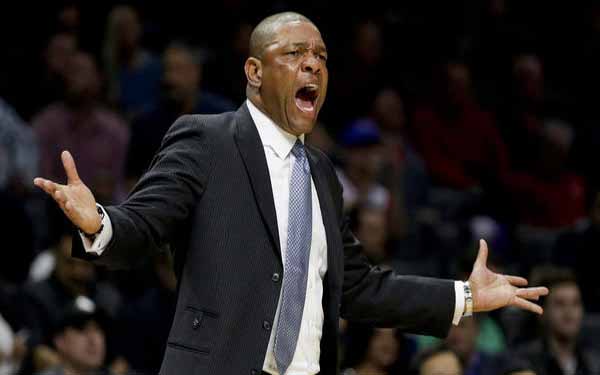 Clippers Coach Doc Rivers questions a call during the first half of a game against the Sacramento Kings.
(Credit: Chris Carlson / Associated Press)

LOS ANGELES—Austin Rivers remembers the postgame speech that epitomized how his father has handled this sweaty fight of a Clippers season.

It was, appropriately, about boxing.

“One thing I’ve learned about playing for my dad is that he gives unbelievable speeches,” Austin said. “Seriously, I had no idea.”

The talk was delivered in early February, after a loss in Toronto that marked the season’s nadir. The Clippers had lost four of five games, including ugly defeats at New Orleans and Brooklyn. The players didn’t seem to like each other. Their coach seemed unable to reach them. There were questions about leadership and toughness. The locker room was full of defeat and disillusionment.

Doc Rivers began telling the story of a powerful boxer who kept pounding his opponent. It was a story whose moral was found in the other guy.

It was then, with strength and confidence, the beaten guy started doing all the beating. The loser eventually became the winner simply because he never believed he was ever losing.

It’s Doc stuff, the sort of attitude that has kept this town’s most famous basketball coach upright amid the surprising perceptual pounding his team has taken much of this season. He sweats, he schemes, he storms, but mostly he keeps getting up and smiling and, wouldn’t you know it, his team has at last decided to follow him to the brawl.

With 20 games remaining and Blake Griffin possibly returning for Sunday’s game against Golden State in Oakland, the Clippers have finally become a reflection of their relentlessly positive and persnickety boss.

The Clippers are currently a fifth seed in the West, but they have gone 7-4 without their MVP in a stretch that included wins against five potential playoff teams. They are finally playing defense, finally playing smart, inspiring their coach to pause in a Staples Center hallway and reflect.

“Sometimes you have to wait for your team, and this is one of those years,” Rivers said.

“It’s been so frustrating trying to get them to believe in each other as much as I believe in them. But right now they’re here, I love our team, I would take us against anybody. Right now, I believe we can win it.”

They don’t need to win it, but, considering Rivers is making a league-high $10 million as coach and general manager for the league’s most costly franchise, for his sake they need to win something.

With owner Steve Ballmer sitting on the baseline and most of the town’s NBA attention on their backs, the Clippers need to win at least one playoff round, if not two, to remove the heat that has been slowly collecting around the coach who just laughs and welcomes it.

“If you’re in position like this, you have to be able to take it, own it, live with it, enjoy your job, and I really do,” Rivers said. “This year, there are expectations, but like I tell my players, you don’t run from them, you embrace them.”

When the season began, Rivers was a national symbol of strength after his deft handling of last spring’s Donald Sterling nightmare. With three stars in their prime, his team was one of the favorites to compete for a championship.

About five minutes later, everything changed. The Clippers were complacent. Then distracted. Then confused. Somebody mentioned that only three times in 14 seasons had Rivers’ teams won more than one playoff series, although that includes his NBA championship at Boston.

Somebody else mentioned Rivers’ moves as general manager were mostly turning out wrong. Then, Rivers swung the door wide open by making a trade for son Austin, a much-maligned NBA newbie who would give the Clippers the first father-son duo in NBA history.

Two days after that speech in Toronto, the Clippers season seemed poised to go into free-fall after they lost Griffin to a staph infection.

Except Rivers didn’t budge. He remained upbeat to the media, supportive on the sidelines, shrugging at the bad luck, laughing at the good.

“I’m a big boy, I’ve been in this league way too long to be bothered by any of that stuff,” Rivers said. “I believe in pressure. I embrace it. It’s been harder this year, but I knew we’d get it back.”

It’s getting there. Spencer Hawes has showed up. J.J. Redick’s shooting is casting a better light on the trade that sent Eric Bledsoe away. Glen Davis is paying attention. And oh yeah, since Austin Rivers arrived — he calls his father, “Pops” or “Coach” — the Clippers are 14-9, and he has played decent defense.

“Sure, I sense the pressure on my dad, but he faces it, because this is what he loves,” Austin said.

Sometimes he may face it by texting his son at 3:30 a.m — “I know he’s always thinking, always working, but I’m still like, what?” Austin said.

“I thought earlier in the year, we didn’t have a great locker room,” acknowledged Rivers. “But we made some moves and now our locker room is phenomenal.”

Although he won’t say it, one of those moves was trading the agitating Jordan Farmar, which still hasn’t quieted the criticism of Rivers as a general manager.

“I think some of it is unfair — if you look at our books when I got here, we had no flexibility,” Rivers said. “But it will all be decided with wins.”

That is the bottom line found in the sweat beneath Doc Rivers’ smile. It’s all about the wins. It’s all about this spring, when there will be no Donald Sterling excuse, no penny-pinching problems, no more culture of failure.

Twenty games left in the regular season, and Doc Rivers can’t wait, even after this week’s short-handed loss to Portland in which DeAndre Jordan forgot to take the potentially winning shot in the final second because he thought the game was over.

“Like I said, I really love this team,” Rivers said, climbing back off the canvas, finding his legs, beaming that smile.