AEG, falling behind in fight for NFL stadium, takes the gloves off 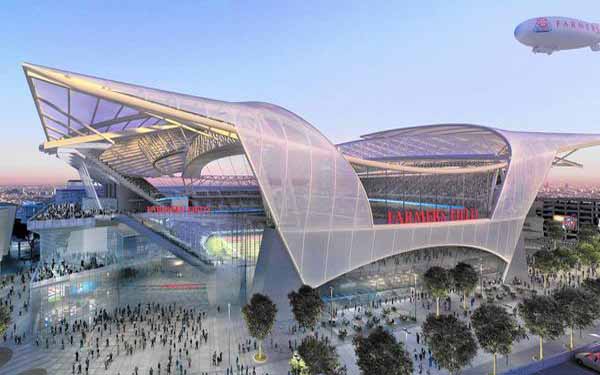 Ted Fikre, the company's vice chairman, wanted to talk about the stadium that the San Diego Chargers and Oakland Raiders plan to build in the South Bay city.

Fikre told Dear the project wouldn't be good for business at the StubHub Center, a sports complex in Carson owned by AEG. The message was clear, say three people familiar with the conversation: AEG didn't want the $1.7-billion stadium built.

Not long ago, AEG was the front-runner in the race to return a National Football League team to the region with the Farmers Field project in downtown Los Angeles. Now it lags behind rival proposals in Inglewood and Carson, both of which, unlike Farmers Field, have the backing of an NFL owner.

AEG is pushing back.

It has paid for two reports that questioned the safety of the Inglewood stadium that would be constructed at the old Hollywood Park racetrack, which is under the main approach route to Los Angeles International Airport.

In one, Mark Rosenker, former head of the National Transportation Safety Board, cautioned about flaps or landing-gear doors detaching from airplanes approaching LAX and falling near the stadium.

AEG hired former Homeland Security Secretary Tom Ridge to conduct a separate review of potential security threats. Ridge issued a report warning that terrorists could shoot down an airplane over the stadium, a scenario he described as a "terrorist event 'twofer.'"

"The Hollywood Park site is no more vulnerable than any other stadium location," said Bill Withycombe, who retired in 2013 as the Federal Aviation Administration's top official for a region that includes Arizona, California and Hawaii.

AEG also provided The Times hundreds of pages of documents that detail complaints and litigation in 2001 involving a proposed stadium in Tempe, Ariz., near Sky Harbor International Airport. The stadium was eventually built about 20 miles away in Glendale, Ariz.

Withycombe oversaw that case and doesn't find it comparable to the Inglewood situation.

"It sounds like the AEG folks are just throwing stuff against the wall and hoping something sticks," said Eric Sussman, a developer who teaches real estate at UCLA.

An AEG spokesman declined Friday to discuss the company's strategy.

AEG, if it chooses, could be far more aggressive, said Marc Ganis, a Chicago-based stadium consultant who helped orchestrate the departure of the Rams and Raiders from L.A. after the 1994 season.

"I don't view what they're doing as overly nasty," Ganis said. "They look at this as a competitive situation. If one of the other projects gets knocked out, they're back in the game. So why not take a shot?

"The meek may inherit the earth, but they won't own a football team in Los Angeles."

AEG has invested more than a decade and tens of millions of dollars toward building a stadium in downtown L.A. next to Staples Center. The L.A. City Council approved plans for the Farmers Field project in 2012 after Tim Leiweke, then president of AEG, campaigned for the stadium in neighborhood meetings and built a coalition of labor, business and community groups to support it.

The company commissioned a 10,000-page environmental impact report at a cost of $27 million. It won special state legislation that made it more difficult for opponents to sue on environmental grounds.

Still, no team has attached itself to Farmers Field.

In January, St. Louis Rams owner Stan Kroenke and his partners unveiled plans for a $1.86-billion stadium to join a housing and retail development at the Hollywood Park site. A few weeks later, the San Diego Chargers and Oakland Raiders announced a stadium proposal for Carson.

AEG, one of the world's biggest developers of arenas and stadiums, began to look like an also-ran in its hometown.

"They want a seat at the table," Ganis said. "Right now, they're sitting at the kiddie table. Carson and Inglewood are at the adults' table."

AEG's development agreement with the city of Los Angeles expires April 17, leaving the company little time to secure a team. AEG recently said that it had made no decision about the project's future, but continues to monitor stadium developments while also exploring other opportunities for the site.

On Feb. 24, Hollywood Park gained an advantage when the Inglewood City Council unanimously approved zoning changes for the stadium. Developers said they planned to start construction by December, even if no team has committed to move here.

So far, AEG's assertions that the Inglewood site is unsafe have gained little traction in aviation circles. Experts have noted that numerous other U.S. sports venues sit near airports, including the Hollywood Park racetrack, which during its heyday averaged crowds of 35,000. The track closed in 2013 after 75 years.

"The report struck me as a fictional scene from a Hollywood movie or the plot for a Tom Clancy novel," he said. "I think it's safe to assume most of the aviation community was either rolling their eyes or laughing it off."

When AEG called Dear, Carson's part-time mayor, longtime company lobbyist Chris Modrzejewski was on the line too. A spokesperson for Dear said he would not discuss the call. He has publicly stated his support for the stadium. The three people who confirmed the conversation are familiar with the stadium projects and did not want their names used because of the sensitivity of the issue.

"It's a very, very fierce competition," said Amy Trask, the Raiders' chief executive until 2013, who has years of experience with L.A. stadium machinations.

It's unclear what else, if anything, AEG would do to fight the stadium in Carson. Stadium backers plan to launch a signature-gathering drive this week to put zoning changes for the project on the ballot. Once the campaign has 8,041 signatures certified, the City Council could then schedule a public election, or its members could vote to approve the initiative.

Either way, Carson could join Inglewood by this summer as having full local approval.

AEG's concerns probably go beyond stadiums. The Inglewood plan includes a hotel, shopping plaza and a performing arts center. With the revitalized Forum close by, this new entertainment hub would threaten to take business away from L.A. Live, the AEG-owned complex that includes hotels, restaurants, the Nokia Theatre and Staples Center.

The Anschutz Co. offered to sell AEG in September 2012, but pulled it off the market six months later when it couldn't find an acceptable bid.

The downtown district thrives in part because the NBA's Lakers and Clippers and the NHL's Kings all play their home games at Staples Center, said David Carter, a sports marketing professor at USC. Though L.A. could support both complexes, Carter said, AEG is smart to be wary of another big player in the market.

"Anyone with a successful track record like theirs would not welcome potential competition," he said. "They're going to be aggressive in protecting their interests."