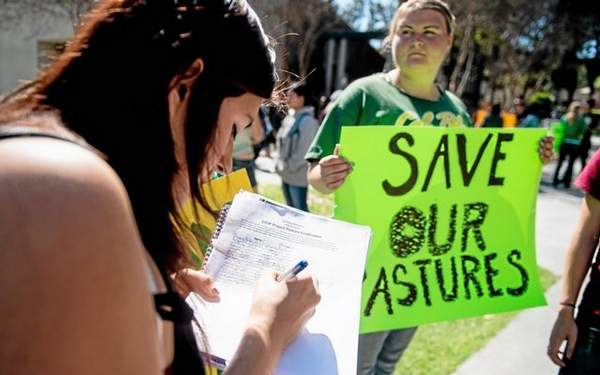 POMONA - The idea of using 13 acres of pasture land on the Cal Poly Pomona campus for student housing has unsettled many students, prompting them to organize protests and start a petition drive to save the open space.

Students say building on the land at the northern end of the campus will reduce the space available to the university’s Arabian horses, have a negative impact on the environment and cut into agricultural education resources on a campus that has its roots in agriculture.

The open space is part of what makes Cal Poly attractive and distinctive from other California State University campuses, students said recently.

Administrators “are making a decision and not looking at it holistically,” said Adam Mason, a plant science major who has organized protests.

University administrators say no decision has been made to build on the land, and they are still trying to determine if it’s even possible to construct residence halls on the site. What is certain is that the university must replace its aging stock of resident halls at the same time it’s facing an increase in requests for on-campus student housing.

Students said recently that instead of building on what they often refer to as the horse pastures, administrators should look at other options. One might be constructing more parking structures in order to free up some parking lots so housing could be built on them, Mason said.

“Why are we growing out instead of up?” he asked.

The concern over the potential loss of pastures is not limited to students enrolled in the university’s College of Agriculture.

Justine Rose is a mechanical engineering major who chose to enroll at Cal Poly not only for its engineering program but also because she could board her horse at the university’s equine facilities.

Cal Poly and the Arabian horses are part of the legacy of cereal magnate W.K. Kellogg, Rose said.

Cal Poly was built on part of W.K. Kellogg’s winter home and the horses are descendants of those he raised. Kellogg gave the land and the horses to the state of California with the condition that his Arabian horse breeding program continue and that the horse shows he started be maintained in order to promote the breed, according to the university’s website.

As Rose sees it, the current situation presents a learning opportunity.

University leaders can “show students how the university can continue to grow. But we need to find a way and maintain our agriculture programs,” she said.

Many conversations have taken place about student housing construction, he said.

Administrators say they are also thinking of the horses.

“Those horses are going nowhere,” he said, adding that a determination must be made that the horses will not be affected and that the remaining land can sustain them.

“The preliminary answer is it can,” Garcia said. “But we have to verify.”

Cal Poly has requirements it must comply with involving the horses as part of an agreement with W.K. Kellogg and with the W.K. Kellogg Foundation, he said.

Administrators have identified campus locations where new residence halls could be built, including land behind the university’s gym, on a parking lot, and three sites on pasture land.

“No matter where we go to build, there will be impacts,” Garcia said.

Constructing new student housing is becoming more critical for a number of reasons, one being that a large part of the residence halls were built in the 1960s. The structures are deteriorating and no longer meet the needs of students, Garcia said. In addition, some housing was built on seismic faults.

Some of the university’s open space can’t be used because it’s on hills and faults, Garcia said.

The need for housing is becoming more pressing because students and their parents are increasingly interested in that type of housing, he said.

Those in higher education say having students live on campus is a positive.

“Students are more successful if they live on campus and have the university experience,” Garcia said.

This is a topic that has begun to surface at the Association of College and University Housing Officers — International, said Emily Glenn, corporate librarian with the Ohio-based association.

“This is something we hear about from our members, particularly in areas where the standard of living is high,” she said.

For some students and their parents, on-campus housing is very desirable, particularly among first- and second-year students, because it can be more affordable and safer than living off campus.

Other students want on-campus housing because they want that college-going experience, and studies have shown living on campus leads to better educational outcomes, Glenn said.

Living in residence halls often puts students a short distance away from student services and programs that allow them to have a richer college experience than if they live off campus, she said.

Residence halls offer study groups, extra academic support and access to trained resident assistants or resident advisers who are older than college students but young enough that undergraduates are comfortable approaching them with concerns, Glenn said.

The 23-campus California State University system recognizes the positive effects of living on campus and many of the universities are beginning to build or expand on-campus housing, said Laurie Weidner, assistant vice chancellor of public affairs with the Office of the Chancellor.

Research has shown living on campus can lead to high grade point averages and increased graduation rates, she said.

Cal Poly would like to build new housing near the center of campus so students can easily access various services, Garcia said.

Cal Poly has 3,900 beds and plans to increase that number to 4,500 with the help of new construction, according to university data.

Cal Poly enrollment has grown over the years. As the university works to accommodate more students, more housing will be needed, Garcia said.

Mason said he and other students would like to meet with administrators and talk about the pasture land issue.

“We want to work with the administration and kind of solve it,” he said.

Garcia said he understands the students and the passion they’ve shown for the pastures, and they will be kept abreast the decision process.

“We are going to communicate with them,” he said.