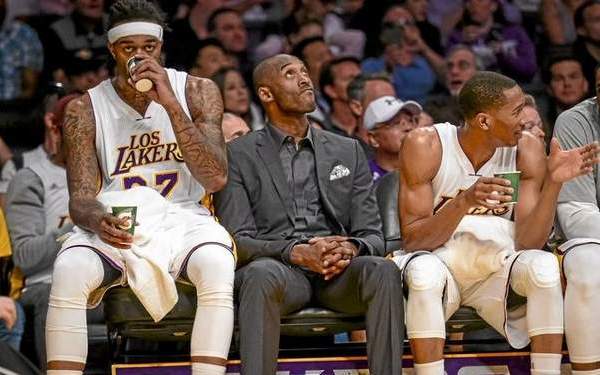 Kobe Bryant sounded at peace as he talked. He frequently flashed an infectious smile. The Lakers’ star walked down a Staples Center hallway with a gingerly pace.

No doubt, the frustration still eats at Bryant over a few things. The Lakers (16-46) enter Tuesday’s game against the Detroit Pistons (23-39) at Staples Center only a month away from missing the NBA playoffs for the second consecutive year and the seventh time in franchise history. Bryant also suffered a season-ending injury for the third consecutive year, the latest involving a torn rotator cuff in his right shoulder two months ago that required surgery.

But the Lakers’ star still exuded an aura of calmness surrounding all the adversity around him. That included Bryant’s optimism about returning for the 2015-16 campaign in what will mark his 20th NBA season and final year of his contract that will pay him $25 million.

How quickly the Lakers rebuild does not just involve both Bryant’s recovery and performances. It also entails how well they build a supporting cast around him.

Yet, Lakers general manager Mitch Kupchak recently said he will not squander the team’s financial flexibility and youth for more established veterans just to strengthen Bryant’s chances of securing his sixth NBA championship in what might mark his final NBA season. When relayed about Kupchak’s strategy, Bryant repeatedly nodded his head to convey support and understanding.

“It’s a balance of both,” Bryant said. “You always want to set the franchise up for the long term. Mitch and I are on the same page. What he said in the interview is not something that we haven’t talked about before. It’s nothing different. You don’t want to compromise the future of the franchise for one season. You try to balance that.”

Bryant spoke those words in an arena hallway after watching the Lakers’ loss to the Dallas Mavericks on Sunday at Staples Center. Bryant had also attended the Lakers’ game last month against Chicago at Staples Center with plans to lead part of the pre-game tribute for former Lakers forward Pau Gasol. But Bryant felt groggy from both recent shoulder surgery and pain medication that he had a private conversation in the locker room with Gasol before leaving.

So Bryant’s latest appearance marked the first time he sat on the team’s bench since aggravating his shoulder on Jan. 21 in New Orleans. Lakers coach Byron Scott reported afterwards that Bryant agreed with his request to attend the Lakers’ 11 remaining home games. That marks a different routine after Bryant spent the last two weeks promoting his Showtime documentary that he said went “very well.”

One thing Bryant did not address, however, entailed his disappointment over Nick Young, Jordan Hill and Carlos Boozer interrupting Jeremy Lin’s post-game interview in the Lakers’ win two weeks ago against Boston. Bryant offered a over the footage in an appearance on Jimmy Kimmel Live. Scott also chastised the team about the celebration.

“What I didn’t say said it all,” Bryant said. “I don’t need to apologize for that.”

Bryant will not travel for the Lakers’ nine remaining road games, with perhaps exception to the team’s designated road contest against the Clippers on April 7 at Staples Center. Otherwise, Bryant will devote his focus toward chipping away at a rehabilitation process the Lakers believe will last seven more months.

Bryant groaned after describing his recovery as “very boring.” After wearing a sling for six weeks following his surgery, Bryant has spent the past two weeks healing his shoulder through massage therapy.

“I’m good. I’ve danced this dance before. I’m being patient and doing what I can everyday,” said Bryant, who averaged 22.3 points on a career-low 37.3 percent shooting this season through 35 games. “I don’t have much pain in it. The range of motion is very good. But they want me to play it safe and make sure it’s in place with where it should be.”

Assuming Bryant returns, will a more talented roster await him?

The Lakers also hope to benefit from rookie forward Julius Randle healing from a season-ending right leg injury and the continued emergence of rookie guard . He entered Sunday’s game against Dallas averaging 14.4 points on 45.6 percent shooting and four assists in 30.2 minutes as the Lakers’ starting point guard through 18 games.

Bryant plans to have more dialogue with the Lakers’ front office about how they will target any of those free agents. Yet, Bryant reiterated his understanding on the Lakers thinking about their interests beyond their star player.

Hence, Bryant gushed with gratitude over Lakers president Jeanie Buss planning to hold unspecified tributes for him during home games next season to commemorate his 20th year with an organization he holds in high esteem.

“It means a lot. That’s an accomplishment in itself to play for 20 years for one team,” Bryant said. “I’m very lucky it’s with this franchise. I feel moved by it.”