Timur and the Dime Museum: punk rock, opera and concern for the environment 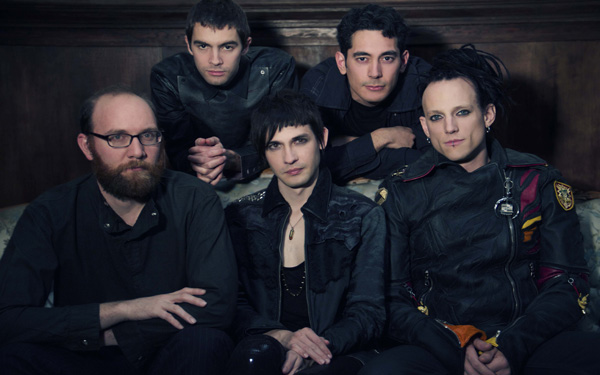 Timur Bekbosunov and the rest of the band.

In an antique manor in the outskirts of Boyle Heights, a bass-guitarist is strumming the chords of his guitar, which is plugged into a computer. His hands glide over the fingerboard as another band member is editing the track on the computer. “Can you turn up the bass track?” says David Tranchina. “I can’t hear myself very well.” Tranchina is recording his part of the track before the rest of the band gets there. It’s rehearsal day for Timur and the Dime Museum and they are recording their demos for their upcoming release, COLLAPSE, a requiem about man-made environmental disasters.

Timur and the Dime Museum consists of a group of men who wanted to move away from classical opera and towards contemporary avant-garde music. Timur Bekbosunov, the band’s front man, calls his group, “one of those weird acts that you can point your finger at,” With a little bit of indie rock, a bit of blues and a hint of post-punk, every song on their album promises diversity, in hopes of attracting a larger audience. At their “studio” in the middle of Los Angeles’ Boyle Heights, the group is getting ready to tour the East Coast starting January.

The strange band, with the strange name and the strange yet artistic costume selection has an equally strange beginning. In 2010, a talent scout from “America’s Got Talent” reached out to Bekbosunov. At this point, Bekbosunov was bandless. He had just moved away from musical theater because he felt it didn’t “challenge him” enough; instead, he was attracted to opera and contemporary music. Grabbing a cellist, a bassist, a guy with a clarinet, an acoustic guitarist and others, he soon had a band of eight friends with a multitude of backgrounds. Today, however, the band consists of only five men: Timur Bekbosunov, Daniel Corral (Accordion, Keys, Songwriter), Matthew Setzer (Guitar), David Tranchina (Bass Guitar) and Andrew Lessman (Drums).

And Bekbosunov has always followed his own path. Originally from Kazakhstan, he was born in 1983 into a family where his mother was a pianist and his father was a psychiatrist. His parents believed musical ability was part of a well-rounded education, so Bekbosunov attended music school for seven years, starting at the age of six. Then, he dabbled into broadcast journalism before deciding that that was not the career he wanted for the rest of his life.

“When I applied for universities, I think music was just the easiest school to be accepted to,” says Bekbosunov. “My parents never wanted me to become a singer.”

He moved to Kansas, where he realized that his chosen art form, musical theater, “had a sugar-loaded corny quality to it.” That’s when he switched into opera. When he moved to Boston, Bekbosunov worked at the American Repertory Theater and experienced his first production of “Oedipus,” which was composed by Evan Ziporyn. He remembers that Ziporyn was hired to write a chorus in Greek for the piece, which was very difficult.

“I just remember that being the first time I was exposed to contemporary music and art. I felt alive,” says Bekbosunov. “I felt that was the place where I could really belong – it was more exciting than just singing classically standard opera.” Attending the University of Southern California and the California Institute of the Arts, he fell in love with Los Angeles, calling it a place that has “this combination of art, theory and sort of glamor, with a sense of community and where you can explore things.”

When Timur and the Dime Museum began to form, they started out as a Cabaret band that sang David Bowie covers.

But what’s behind the name? According to Bekbosunov, the dime museums were centers for entertainment of working class people at the end of the 19th century, founded by P.T. Barnum. Today, there are very few of them left in the United States. These dime museums were for the socially disadvantaged, who couldn’t afford to go to expensive museums, and therefore, they had an important place in American history.

And while the band was googling words that they used to describe themselves – such as fantasy, funny, odd and strange – one of the first things to pop up was “dime museum.”

“We thought it was an appropriate term to what we were doing because I always liked the villain fantasy-based type of shows and something that’s circus-inspired, even though we don’t sound circusy.”

But once again, Bekbosunov’s path changed and they moved away from that area to become more electric. Hence the newest project, COLLAPSE.

“Everyone thought, well what is it? Is it a concert, a play, an opera? A requiem? Our songwriter, Daniel Corral, took the form ‘requiem.’”

Requiem, meaning any piece of music composed or performed as a memorial to the dead, is the perfect word for the theatrical project that incorporates multimedia while exploring multiple man-made environmental disasters. The band’s songwriter, Daniel Corral, had the initial idea of making a musical piece and writing catchy songs about the very dramatic, urgent subject matter that would motivate people to talk about these issues, such as nuclear disasters or global warming.

“We go through a day not even thinking about the melting ice in Antarctica or the loss of resources. Once you start thinking about it, it kind of shocks you. COLLAPSE kind of summarized everything, in such accessible fashion,” says Bekbosunov.

The East Coast tour for COLLAPSE kicked off in January, after four completely sold out shows at REDCAT in Downtown Los Angeles. The band performed in New York, Boston, and Philadelphia, among others. At the same time, the band is trying to raise money to record the album in an actual studio. As of right now, they have raised $7,000.

“We are just gearing up to make a whole album of it,” says Corral. “The goal is to have it finished by the fall, so we can have this version of it that we can see ourselves and have presentable objects.”

“We are shooting in the dark – some things you can predict, and some others can’t,” says Bekbosunov. “Some people thought it was more of a rock show and less a contemporary music composition, which kind of made me happy. That was the whole plan for us, to make it more like a rock show, or rock opera.”

Picture a gospel-spewing Elvis Presley meets Liberace costume, and that’s what Timur and the Dime Museum wore on stage. The visual aspect of the performance is just as important as the music. LA-based video artist Jesse Gilbert created multimedia projections to reflect the songs and the literal or abstract meanings of them.

“He played with a lot of textures and distortions and live feed imagery that was captured on three cameras,” says Bekbosunov. “It was a bombastic multimedia spectacle to entertain the ADD generation.”

The band also hopes to perform one show in Los Angeles after their East Coast tour – preferably at the Echo in Echo Park.

The set list will include four or five songs from COLLAPSE, the rest being previous songs or cover recordings. Bekbosunov’s favorite song is called “Remember This”, but his preferred cover song is “Life on Mars,” by David Bowie: “It’s such a great song – such a detailed perspective delving into contemporary times. It was written in the 70s but it’s so relevant today.”

Bekbosunov doesn’t exaggerate with his dreams for the band – he only hopes that “one day, we will have an album that has songs that people can play in the car.” He also wishes for more collaborations – in particular with Danny Elfman or another established musician like Beck.

“I really believe in creating mutually rewarding projects with other bands and musicians.”

After all, Bekbosunov has been involved with the band, DeVotchKa, who wrote music for movies like “Little Miss Sunshine.”

“They are unique because you probably haven’t heard of them but they can easily pack a hall of 10,000 people,” he says. “That tells me that it’s possible to have a career where you can make a living, be passionate about it and bring in a huge audience.”

Apart from COLLAPSE and his freelancing career, Bekbosunov focuses on his artistic ability, channeling that into working on the yard of his new Boyle Heights home.

“I feel like all my free time is devoted to trying to grow things – planting fruit trees, growing succulents and drought-tolerant plants. That’s become my little hobby.”

But his heart will always be with the band. While gardening, his mind will shift to his true passion of living out his other persona on stage.

“You get to do so many crazy things on stage with a microphone that I could never do in opera. I feel like I can scream, yell, growl, sing and that unlocks part of your personality that’s not there in real life,” he says. “Maybe that’s the great thing about being on stage: You get to live out your other life.”