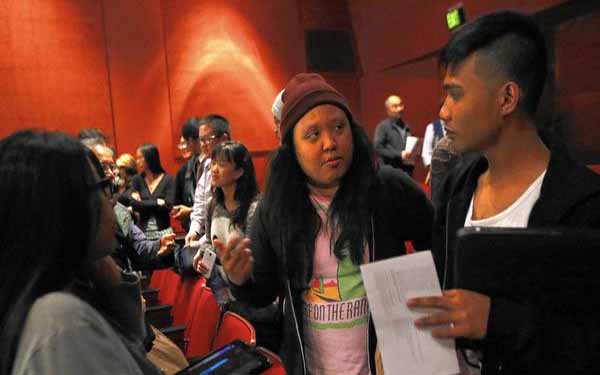 Diego Aguilar Avila enrolled in Cal State Northridge last fall, and the freshman says he's lucky to have gotten in when he did.

The Northridge campus recently announced plans to tighten its admission criteria beginning in fall 2016. That could have created a hurdle for Avila, who admits to receiving low grades in some of his classes at Bravo Medical Magnet High School in East Los Angeles.

"I might not have gotten a second chance to go to a very good school because of the one year I messed up in high school," said the 18-year-old philosophy major, "so I'm happy to be able to come here."

The Northridge proposal is an attempt to control unprecedented demand; enrollment increased to more than 40,000 students in 2014 from about 35,000 in 2009. The school received more than 58,000 applications for fall 2015.

The campus is aiming to reduce its entering undergraduate class 1%, or about 300 students in each of the next four years. To achieve that goal, high school graduates and transfer students from outside the local area will need to meet higher admission standards — which could include increased grade-point averages, test scores or other criteria.

In addition, all students would be required to meet higher standards for four in-demand academic majors — psychology, kinesiology, music, and cinema and television arts.

Across the Cal State system, campus officials are limiting enrollment using higher admission standards to do so. Currently, 18 of the 23 universities restrict applicants; a decade ago only eight campuses did so.

As with Northridge, Fresno State also is looking to further reduce enrollment. The Cal State Board of Trustees must approve those plans.

Enrollment demand outside California has fallen as the population of high school graduates decreases and many young adults head directly to the workforce, he said.

Maintaining access to a college is important, he said, but universities such as Cal State are right to prioritize the quality of education that students receive.

"I think it says something that CSU leadership is taking the step to limit admissions knowing the political and public pressure" to do the opposite, Hurley said.

Efforts to manage enrollment picked up pace during the financial crisis that began in 2008, when California's public higher education systems were hit with billions of dollars in state funding cuts. That funding has yet to return to pre-recession levels.

Campus officials say they lack funding to hire enough full-time faculty to meet needs while facing surging numbers of applications from out-of-area transfer students and qualified high school graduates. The system received more than 790,000 applications for fall 2015, a number greater than the population of North Dakota.

The ramifications systemwide are far-reaching.

Even so, most campuses are serving more students than they have been funded for by the state. Those excess students create bottlenecks that stall time to graduation.

"It's a choice between the evil of bringing in everyone and not being able to accommodate them with the resources they need, and enrolling fewer students, but giving them access to classes, counseling and academic support," Forbes said.

Northridge already enrolls about 11% more students than the target set by the state — and the surplus is straining the physical capacity of the campus, said Harold Hellenbrand, provost and vice president for academic affairs.

The campus has limited freshmen admission in the past, but had resisted the further restrictions, he said.

Not everyone at the northwest San Fernando Valley campus is sold on the plan. At a public hearing last week, many students, alumni and community members voiced concerns that it would disproportionately affect low-income communities, an outcome that the campus will work hard to mitigate, President Dianne F. Harrison said.

Some faculty, too, worry that limiting applicants could result in a less diverse campus.

"I understand the financial impact, but we should work together to increase overall funding for public higher education and not reduce the opportunities students have to go to good universities," said Theresa Montano, a professor in the Chicano Studies department, one of the nation's largest and which attracts students from Central California and other states.

Cinema and television arts receives more than 130 portfolios of students' work each semester to fill 40 to 45 spots. The department lacks the faculty, equipment and space to accommodate everyone, said professor of cinema Nate Thomas, who also is president of Northridge's faculty union.

"Overall, people understand that there's got to be some way to control the numbers," Thomas said.

The Northridge plan would create a local admissions area for transfer students that includes 17 regional community colleges whose students would need to meet basic admissions requirements such as a 2.0 GPA. Applicants outside the area would need a higher GPA and could be admitted as space was available.

In addition, the campus would shrink the current geographic area designated for freshmen, eliminating high schools in Ventura County, the South Pasadena and Alhambra unified school districts and the east region of the Los Angeles Unified School District.

Students in those areas could choose other Cal State campuses in Los Angeles, Dominguez Hills, Channel Island or even Bakersfield. The latter three campuses are among the five that have no campuswide enrollment restrictions. The others are Stanislaus and the Maritime Academy.

The Northridge action is not surprising as demand has increased at virtually all campuses, said Cal State L.A. Provost Lynn Mahoney. The Los Angeles campus received about 4,000 more applications between 2012 and 2014, Mahoney said. The 23,000-student campus restricts enrollment in nursing and a few other programs but generally has room for more students.

"We're not going to get all 300; some of those students will go other places, we just don't know," Mahoney said.

Meanwhile, some high schools such as Bravo Medical Magnet are preparing to explain to students why getting into Northridge may be harder.

The school has sent more than 100 seniors there over the last five or six years, said Art Maletz, Bravo's college counselor.

"I'm going to continue to encourage them to apply, " he said, "even knowing their chances of getting in will be lower unless they have a really high GPA."