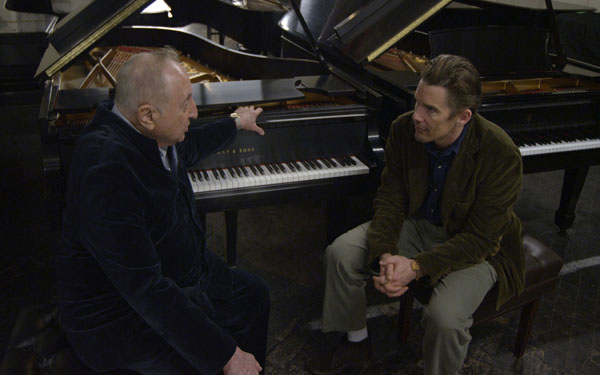 “Music and life interact in a never-ending cycle of fulfillment.” – Seymour Bernstein

What drives an artist to willingly exile himself from the public eye, rejecting the merits of earned success? For Seymour Bernstein—a master pianist, composer and teacher—wide praise and a plentiful career were mere diversions from what truly mattered in his life: the music itself. It’s little surprise then that many were baffled when he left the packed concert halls behind during the prime of his career, a move that most onlookers (and even himself) regard as a premature departure.

Decades later, the man himself explains why his decision was unquestionably necessary in Seymour: An Introduction. Directed by Ethan Hawke (Boyhood), the documentary came about when, at a crossroads of uncertainty concerning his own life as an actor and artist, Hawke was wooed by Seymour’s insight into attaining inner happiness.

Seymour discovered that his music was more important to him as a passion and not a career, and understanding this was essential. In his eyes, music is and forever will be the constant in his life, while other career paths can shift, change or vanish. And so, with his doc, Hawke shines the spotlight on the solitary master to share his path of, what some may call, enlightenment.

Using his own self-doubt as the springboard for Seymour’s story, Hawke displays a humble vulnerability, while still understanding that this is indeed not about him, but Seymour and his optimism. In an age where careerism is advertised as the one and only way of life, Seymour offers something else to take its place—something other than commercialism or some wider financial avarice that can engulf an artist’s life.

Call it passion, call it love, call it whatever you will, but Hawke’s camera intimately explores that undeniable, yet indescribable hunger for expression that tangibly rests in Seymour’s heart. From haunting tales of war to coffee with old pupils, we gain an invaluable lesson on accepting vulnerability, and using it to permeate creation. Whatever his message, Hawke’s lens rests closely to Seymour’s kind and timeworn eyes, allowing nothing of his character to hide behind the doors that have guarded him from the world for so many decades.

The downside comes from Hawke’s tunnel vision with a few weak tangents that go inadequately explored, such as brief and uneven chats about mysticism. Some viewers may see Hawke’s film as banal, as it caters too perfectly to a narrow niche of audience—the wavering artist who questions his or her motivations.

Nonetheless, Seymour’s earnest and genuine account of the money vs. passion struggle ought to reach far beyond the art world. Anyone uncertain of the path they’re trudging should find solace that Seymour’s music pervades through countless others’ fingertips in music halls around the globe, as a result of his devoted passion. If that’s not what art is about, then Seymour has fooled us all.