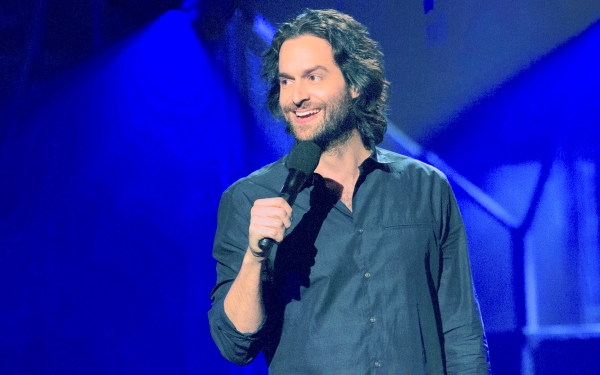 PASADENA, Calif. — Making people laugh wasn’t a mission or a calling or even a lucky vocation for comic Chris D’Elia. It was salvation.

He was an actor first, and he couldn’t get arrested even if he toted a Molotov cocktail down the Sunset Strip.

“I couldn’t get an agent. I didn’t even know how to do it at all. This was before (I did) standup,” he says, seated in a barrel chair in a hotel lounge here.

“It was so depressing for me. I had two roommates, a brother and sister, and I was kind of ‘the other guy.’ He was an actor, and at that point, he was working way more than I was. I would think, ‘Man, I wish someday I could get a job like he does.’”

They were living in beautiful downtown Burbank and D’Elia was driving an SUV so indistinctive that he can’t remember what make it was.

But that all changed when he began to pursue his real passion, standup comedy. “Nothing else mattered. I wasn’t depressed anymore if I could get on stage that night. I could talk to six people on stage, as long as they paid attention to me because the business wouldn’t.”

The son of producer-director Bill D’Elia, Chris remembers it began when he was about 8.

“I was in the car with my mom and dad. And I was making a joke about a commercial. And my dad was at a red light, and he was laughing so hard that the light turned green and then back to red, and he didn’t leave because he was laughing and crying so hard.

“I remember thinking, ‘I can’t believe I made my dad laugh that hard. That would be so cool to just do that forever.’ The power I had — having him skip the green light —was just wild to me, and I had already loved being funny at that point. But I always remember that.”

He made so-so grades in school, but his mind was spinning with other ideas. “I lived in my head as a kid,” he says, his thin face outlined by a Smith Brothers beard.

“I couldn’t fall asleep at night, and I was very scared. I would run into my parents’ room when I was a kid. I was scared of robbers, ghosts. Once I bought my first house, I felt like I could sleep because I felt like I was a man and I could take care of stuff now. It was very weird and symbolic, but I remember feeling that.”

Chuckling, he says that was a year and a half ago. But it’s not far from the truth. D’Elia didn’t really make much money until he costarred in the sitcom “Whitney” three years ago.

He continues to weave acting into his comedy and not the other way around. On March 17 he costars in NBC’s funny “Friends”-like comedy, “Undateable.” Divorced, D’Elia says he’s not really undateable but his work consumes his attention.

“I was 26 when I got married. I think I got married the first year I was doing standup. I was doing three or four shows a night. It ended up dissolving, but it really was OK. I still think she’s a great girl. It wasn’t like, ‘I hate you.’ ‘I hate you.’ It was just like, ‘Maybe we should scrap this and start from jump.’ And we did. And I’m happy it turned out the way it turned out. And then my job became what I did and that’s part of the reason we ended up parting ways.”

He says comedy requires constant performing. “I don’t know any other way to do it. I look at Ray Romano and other guys who have relationships and were able to do it. That’s a testament, man. I think that’s great. I just don’t know if I could’ve figured it out.”

But he hasn’t written off marriage. “Maybe. I think it really depends on the girl because I’ve had some good relationships since I’ve been married, and I think it depends on what girl I’m with. Sometimes the girl’s all gung-ho, ‘Someday we’ll get married.’ And sometimes the girls are, ‘I’m happy to hang out with you now and be your girlfriend and we’ll see what happens.’ I haven’t written it off.”

In the meantime, standup sustains him. “I do standup because I feel like I have to for my emotional state. I’ve done standup for nine years, and the longest I’ve gone without doing it was seven days. So I just don’t feel right if I don’t do it. For me, I feel like I have to do it. I think about those football players, that’s their life. Then they get injured and can’t do it. I can’t think of something more miserable than that if that were to happen with standup.”

D’Elia will be doing his second standup event on Netflix in April. And whom did he hire to direct his special? The guy who laughed right through the green light.