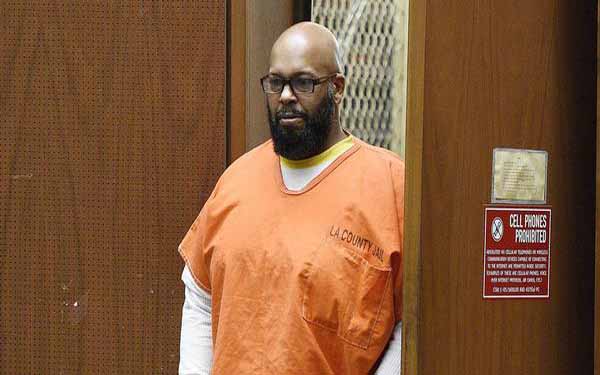 The video, posted on TMZ on Monday, appears to show Knight’s red truck pulling up to a Compton hamburger stand. He appears to talk to several people standing nearby before the truck backs up and hits one of the men, who falls to the ground. Seconds later in the video, the truck comes back and runs over the man on the ground and hits a second man before speeding away.

Knight appeared in court for a brief appearance Monday. His attorney, Matthew Fletcher, spoke with reporters afterward and said the video shows Knight being attacked while he sits inside his truck before speeding off.

“They started it. … They attacked him,” Fletcher said, equating Knight’s reaction to a stand-your-ground situation. “You’re not required by law to run. … If Suge had put it in park and got out, he’s dead.”

Referring to the video, Fletcher said “100% it proves Suge Knight was attacked.”

Fletcher said the video also shows a man with a gun. Toward the end of the footage, someone is seen taking a black object away from Sloan while he’s on the ground but the image is grainy.

Prosecutors charged Knight with murder and attempted murder for allegedly running over two men with his vehicle at Tam’s Burgers in Compton on Jan. 29. Terry Carter, 55, died, and Cle “Bone” Sloan, 51, was injured in the incident.

The video was from a Tam’s Burgers security camera, Fletcher said.

Knight has pleaded not guilty.

Prosecutors claim Knight intentionally struck the men with his vehicle. A former lawyer for Knight said Knight was assaulted and, while trying to get away from his attackers, accidentally ran into the men. The video does not appear to capture an assault.

The confrontation began when Knight, Carter and Sloan began arguing on the set of “Straight Outta Compton,” a biopic about the rap group N.W.A.

Knight was kicked off the set and was leaving the area when someone called him and asked him to go to Tam’s Burgers, where the deadly confrontation unfolded, Fletcher said.

Knight was taken to a jail infirmary last week after saying in court that he couldn’t “really comprehend” what was happening.

Fletcher said he updated Knight on how the video affects his case.

“I said, ‘This helps you beyond any stretch of imagination,’” Fletcher said he told Knight. “I know this – Suge didn’t get out of the car and attack them.”

Knight also faces charges stemming from an incident in which prosecutors say he and comedian Katt Williams stole a camera from a photographer last September.